Five acres of ancient semi-natural woodland are about to be trashed by Caerphilly council in South Wales to make way for a 2 mile long bypass which will provide a new access road to industrial developments at Blackwood in Gwent. A decade-long protest came to a head recently when Caerphilly County Borough Council signed a contract with Sirhowy Enterprise Way to begin work on a £54m bypass despite receiving some 4500 written objections from locals. Compulsory Purchase Orders to acquire the land have now been served and the contractors Costain & Tarmac have begun felling.

On January 29th 100 tress were chopped down but the work was halted by two lone protestors locking on to the bulldozers. A base camp has now been set up amongst the trees, with about 15 people and Section 6 squatting notices in place. More help on site is urgently needed. 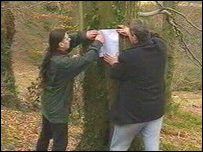 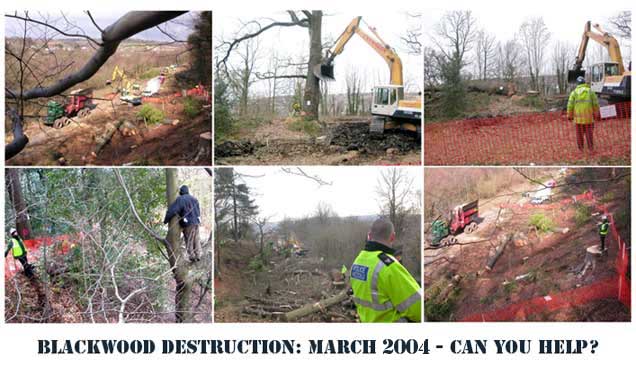 Monday 15th March: Protesters Outnumbered by 12 Bailiffs + Police
There were no chainsaws around today, but other work was going by the camps. In the afternoon, somebody D-locked themselves to a large vehicle and held things up for about an hour - the police promised not to arrest him, then did! Another was also arrested for breach of the peace. They were both released without charge. People now being given formal warnings on camera, and some threatened with arrest. Bailiffs have been pretty rough at times. Read Report

Saturday 13th March: Make a difference to St Davids Wood
The campaigners say they need: nets, polyprop, socks, waterproof coats, shoes and donations. A JCB has left the site over the last couple of days and it could be due to the potential for bad publicity and people phoning the hire firm letting them know how strongly they feel. Read Update

Friday 12th March: Work Stopped / New Camp Set Up
Work was completely stopped by protesters in two locations when their numbers were boosted by a group of about 14 activists from Oxford and 5 bailiffs found themselves outnumbered 4 or 5 to one. A Third camp has also been set up. Eviction proceedings are still going through the courts - this means that, until Wednesday (the next court date) at least, any eviction would be illegal. Read Report

DESTRUCTION INCREASES: Roundup Report
Destruction at Blackwood / St David's Wood in South Wales has increased massively in the last week with a huge influx of bailiffs to protect the chainsaws. Costain's tactic has been to cordon off an area early in the morning, secure it with bailiffs and proceed to cut down every tree inside it and reduce it to woodchip. Protesters are left with the last ditch tactic of trying to guess the area to be trashed and rush up trees before the cordon is completed. Protesters were occupying climbable trees for over 8 hours on wedsnesday, knowing that as soon as they leave them, chainsaw wielding vandals will move in for the kill. Everything around occupied trees is ripped apart, as contractors show disregard for safety, felling trees which fall within arms length of people in the area, and even felling one with someone in it!
Read Indymedia UK Protest Camps News Roundup Feature

Wednesday 10th March: Dangerous Tree Felling
More trees down today but not as many as yesterday - they managed to stop work a bit earlier. One of the construction workers cut down a tree with someone in it! Luckily he wasn't hurt as he managed to grab hold of another tree before he fell. Other trees with people in were hit by other trees falling. Incidents like these, and worse, have been captured on video and photos but if anyone's going there could you take a camera too? The more cameras there the better!

Wednesday 10th March: Blackwood on HTV Wales News
Blackwood was on HTV Wales news and made a very sad picture. The news report pointed out that the original railway builders went around the ancient trees and showed a huge beech tree left standing, but went on to add that this is not the case today, and that these trees are now in line for the axe.

DESTRUCTION PICTURES AND REPORTS:
Pictures and reports of the destruction of some of the larger trees and areas next to the camps over the last week from Bristol Indymedia (see also Montage of Images).

Tuesday 9th March: First Arrest at Blackwood
The very first arrest was made at Blackwood on tuesday as some protesters tried to break into a cordoned area (the person was arrested for breach of the peace, taken off site and later released). Read South Wales Argus Press Report

Monday 8th March: No Eviction But Big Increase in Bailiffs + Destruction!
The feared illegal eviction has not taken place however increased numbers of bailiffs, police, and contractors have been cutting down the larger trees with up to 50 bailiffs protecting chainsaws as the trees are felled at an increasing rate. Read Reports 1 2

EVICTION ALERT: Sunday 7th March
A tip off today has revealed that COSTAIN intend to go ahead with an illegal eviction early tomorrow morning even though the high court in london has overturned the eviction possesion, pending an apeal. A leaked source has revealed that even though costain know the eviction to be illegal, they intend to go ahead with it. Read Alert

6-7th March Costain Subcontractors Use Violence / Work Stopped
On Friday afternoon Costain sub contractors (Walters) drove a tractor through a human chain of activists who were preventing logs from leaving a field. No one was seriously hurt in the incident despite activists falling under the wheels and undercarriage (see pictures posted two weeks later).
On Saturday three campaigners climbed onto a 15-foot-high wood chipper at St David's Wood, stopping work. Mark Lynas, an environmental journalist from Oxford, who took part in the protest, said: "It has been a complete victory for us, and hopefully with more people arriving on the site it will get more and more difficult for them.
Read Multiple Press Reports

PICTURES: 5th March
17 Pictures of the camps and the destruction, as of Friday 5th March. See Pictures

HIGH COURT UPDATE: 4th March
People went to the high court and the eviction order was put on hold. This means we now have another court date in Blackwood sometime in the week starting 22nd March in the meantime the possession order has been revoked - this is as good as it gets chaps, hooray, and boy was the undersherriff cross when i phoned him with the glad tidings late yesterday afternoon Read Update

Tuesday 3rd March
Blackwood people have called on supporters to politely ask subcontractors working on the Blackwood Bypass in S.Wales to stop destroying the last woodlands in the valley. Read Update

RUMOURS: Sunday 29th Feb
Word is that a team of 36 chainsaws will be at Blackwood soon. With that number of chainsaws the trees will all be destroyed very quickly, and before the European Court has a chance to decide on this development. Word is also that Blackwood will be evicted before the same team move on to evicting Nine Ladies. Blackwood eviction hearing is Wed 3/3, an eviction attempt is expected soon after! Read update

UPDATE: Friday 27th Feb - Protected Species Trashed at Blackwood!
Costain and sub contractors are felling trees which are clearly marked as having bat roosts onto dormice habitats (also clearly marked and fenced off). This is happening daily, but the police have strong evidence for at least two other occasions, and Costain sent the bat officer (who has to be there whenever there is any felling of potential bat trees) home for a week. Nevertheless the Welsh Assembly is refusing to revoke the licence to work in the area where the habitats are, and by the time the police and CPS can press charges (damaging bat habitats and killing dormice is a criminal offence) it will be too late. Read update

Tuesday 24th Feb - Blackwood court case weeks adjournment
Blackwood (St Davids woods) has got a temporary reprieve from eviction red alert - a week’s adjournment on the possession / eviction case to give us time to get our (legal) defence together. Read updates 1, 2

Tuesday 24th Feb - Blackwood arooga!
What happens if blackwood loses in court re possession of the land this afternoon. Read update

Wednesday 18th Feb Locals stop work at blackwood
For the second day running locals together with activists from the camps have stopped work at Blackwood, out- numbering bailiffs and Costain workers and sending the chainsaws packing. Read update

UPDATE: Tuesday 17th Feb
TRASHING CONTINUING THIS MORNING - MORE MACHINERY ARRIVING ON SITE! Two camps are now established (Kerry and Jordan!), but more people are desperatly needed. The campaigners say with extra support they can win this one. Work was stopped yesterday (monday 16th) but more security and contractors have arrived. Read update (17/02/04)

Saturday 14th feb
No sign of security, balifs, police, contractors or other meanies on the bypass site. Despite the 'Harry Potter' eviction notice (which the security seem to think gives them the right to walk into the camp) the police are still respecting the section six squatters notice and asking permission to enter the camp.

Thursday 12th feb
Today, on the advice of CCW, the /b> on site pending an application for the granting of a license to move the dormice colonies en route - read story and legal update

UPDATE: Harry Potter Law
On 9th February the High Court in London granted, an application on behalf of Costain and Caerphilly County Council against a "wide category" of defendants at the Blackwood protest camp. Justice Blackburn granted the interim injunction which is based on a new ruling in the Harry Potter Bloomsbury case. The injunction means that persons entering or remaining in a specified area (the threatened woodland at Blackwood, in this case) can be immediately removed!
Read more on Harry Potter Injunction.