Bellway Homes are attempting to destroy a group of ancient trees and a natural meadowland to build what campaigners say is an unnecessary road junction. The area is supposedly guarded by a Tree Protection Order as it possesses a 300 year old beech tree, yet the council are refusing to take any action against the developers.

Local campaigners and residents at Mansfield Woodhouse's tree houses' and tunnels were visited by the Sherriff on Tuesday 10th February and informed that an eviction of the protest camp would be taking place imminently.

Welsh Bailiffs came on site with a warrant conducting a health and safety review of the site. They said they would be returning imminently with a professional tunnel team and climbers.

Campaigners hope they can delay the destruction long enough for action to be taken in the courts. On Saturday the small numbers present were boosted by a call for support which mobilised enough people to foil what they say was an illegal eviction attempt (report). The campaigers say they desparately need more people in site to help build defences, and to stay over night so numbers are at a maximum when the bailiffs move in. It seems likely it will happen very soon. 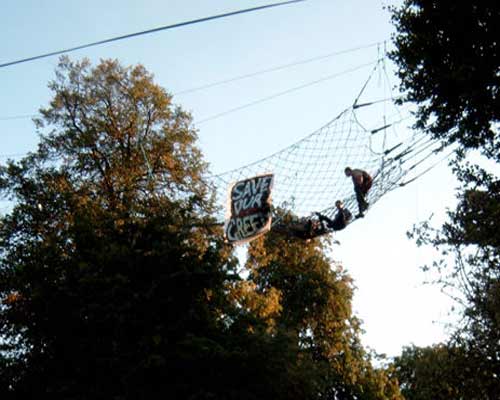