Storming of the Palace

Saturday evening, around 250 to 300 grassroots activists made their own free entry to the official ESF and denounced the ESF organising process from the stage of the main plenary.

The intervention occurred during one of the main pleaneries, where Ken Livingstone was expected to speak. A decision to pull Livingstone out of presenting his speech on a panel had been taken only shorty before.

The activists took the stage and hung banners – 'Kens party, War Party' – 'ESF Another World is For Sale', to bring attention to the exclusive nature of the london esf, and to report the police intimidation of activists at autonomous centres this weekend. 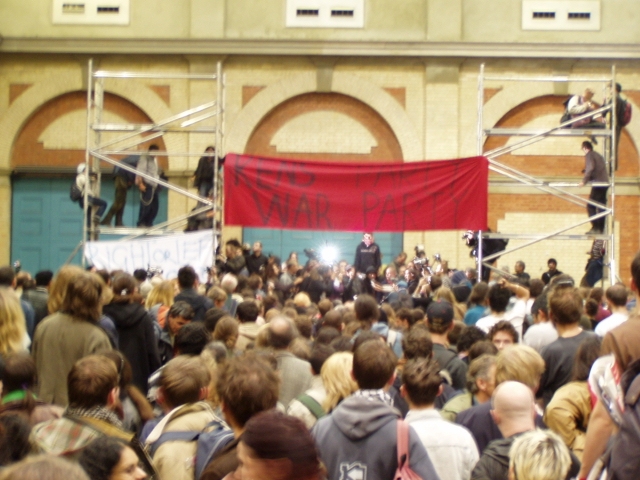 speakers on the stage

During a later meeting of the Assembly of Social Movements Redmond O'Neil (of the GLA) condemned the intervention, saying that the activists, who had 'outed' the problems with democracy and communication in the ESF, and had attacked people and stolen phones! A table had gone over during the taking of the stage, but many on the stage assisted in looking for any lost items. After some initial confusion from delegates, many became vocal both denouncing the intervention but many more supporting the statements of Babales and others.

Delegates listened to around half an hour of statements from activists, often cheering the speakers whilst they exposed some of the problems within the ESF process [ Babels Statement ]. Afterwards, activists handed the plenary back over to the official speakers and left as one group chanting 'solidarity' with some delegates following.

Later those that left were exposed to police violence, with people pushed and punched, police with batons at the ready, and a small number of arrests were made. The activists continued back to the 'Beyond ESF space' occupying the road. The activists were followed all the way back by several police vans