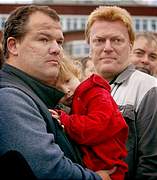 waiting for you solidarity

As some participants of the ESF in London concentrate on infighting - or on kissing Labour´s bum, German car workers opted for unofficial industrial action. They now wait for your solidarity.

Following GM Europe chairman Fritz Henderson’s announcement of 12,000 planned job cuts in the whole of Europe - including Britain, on Thursday shifts at Opel’s Bochum plant occupeid their workplaces, layed down work, or gather outside the plant instead, or occupying the gates.

The strikers will not be payed! Of course not by the bosses - but since the union refuses to make this wild cat action into an official strike - neither will they receive "industrial action wage" from the union!

General Motor's central works council declared next Tuesday as ‘European action day’, in which GM workers in Germany, Britain and Sweden will all be asked to participate.

As the time of writing this section the wild cat strikers voted to continue action until Monday morning shift. Then a new decision will be voted for. The strike has so far support from citizens and workers from other industry. The traditional sunday afternoon stroll took many to the factory gates. Local shops donated food. Money is collected.

The union bosses - behind curtain - want the strike to end - as production losses are not only costing the bosses many millions a day - but also the strike undermines the governing German labour party which has lost credit amongst population as it is trying to push through a package of severe cuts in dole, health and what not.

All gates in Bochum plant are picketed. No material can leave to other GM factories. Beginning this monday morning shift this will lead to shortages in European plants of the GM groop, thus production will fall short or stop comletely.

Also supliers of Opel like Johnson Controlls have stopped production - as Bochum no longer asks for parts.

White collar managent men have been prevebted so far from transporting parts out of the factory. Police have been seen near the plant but have stated they will "keep out" of the conflict.