A train carrying "Castors" of nuclear waste from France to Germany ran over a protestor who had chained himself to the tracks, severing one of his legs. Paramedics offered him emergency treatment and tried to get him to surgery, but he died before reaching hospital. The 23-year-old lay down and chained himself to the track as the train passed near the town of Avricourt, eastern France [Timeline of Events]. The train was carrying nuclear waste being sent back to Germany after reprocessing in northern France, and had already been delayed for two hours while police cut free two other protesters who had chained themselves to a section of track.

Thousands of demonstrators have been gathering since the train set off on Saturday from the La Hague reprocessing plant in Valognes, north-western France, on its journey to the German town of Dannenberg. From Dannenberg the trains' 12 containers - holding 175 metric tons of atomic waste - are due to be shipped to a nearby dump at Gorleben, 12km away. The French protests followed a protest by 10,000 people at the Gorleben site in Saturday. 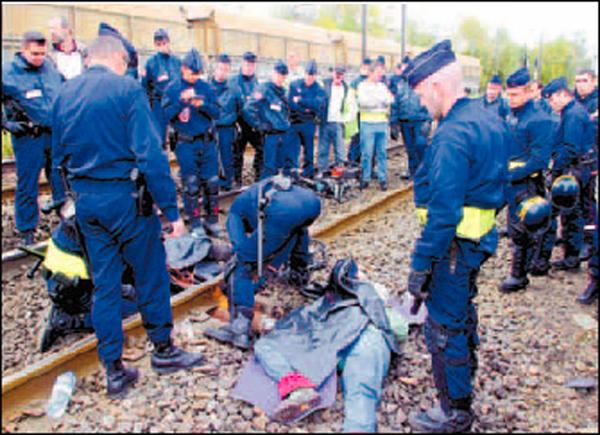 the main stream press is saying

A 23-year old environmental activist paid the ultimate price for his convictions on Sunday. Despite a large security operation, the young man managed to chain himself to the railway tracks near Avricourt, in protest of the latest transport of nuclear waste from a French reprocessing plant in La Hague to a storage facility in Gorleben, Germany.
A spokeswoman for France's SNCF rail operator said the train's driver noticed a group of people sitting on the tracks, and pulled the emergency brake. "One of the people remained sitting, and his legs were cut off and he has died," the spokeswoman said.

The French nuclear technology company, Cogema, said it regretted the "dramatic accident." A company spokesman in Paris said Cogema Logistics staff charged with overseeing the transport couldn't explain how the accident had happened.
The train loaded with highly radioactive nuclear waste had been stopped earlier on Sunday for two hours because of two demonstrators who had chained themselves to the tracks. The Castor transport was originally scheduled to arrive in Dannenberg, eastern Germany, on Sunday afternoon. From Dannenberg, the containers are loaded onto trucks to be transported to the storage facility in nearby Gorleben.

The citizens' initiative in the Dannenberg region, which helps to plan protest action, said it was "shocked and disturbed" by news of the deadly accident. Organizers said they would discuss what consequences the news had for further planned protest action. Thousands of demonstrators have been gathering in Dannenberg since Saturday. In past years, the Castor transports saw violent clashes between anti-nuclear activists and police. The environmental group Greenpeace has warned that the Gorleben storage site is unsafe over the long term and risks contaminating ground water.