Student fingerprinting - not so VeriCool

The plans for the introduction of national ID cards may have been watered down somewhat, but the spectre of a future where everyone's every movement and purchase can be tracked by biometric data looms ever larger. One, at first glance unexpected front where this dystopia is already rearing its ugly head is in our schools. Several companies, with VeriCool the current front runner, are aggressively marketing fingerprinting solutions – solutions to what is not exactly clear as we'll see – to primary and secondary schools, as well as libraries. Before outlining some of the dangers of the system (for a more complete overview see LeaveThemKidsAlone, I will look at one particular case, Impington Village College (IVC) on the outskirts of Cambridge.

In the beginning of this academic year, IVC introduced a new fingerprinting system, which is used to register students at the beginning of each lesson, and that has replaced borrowing cards in the library and money in the school's canteen. This is how it works, at least in theory: before the start of each lesson the teacher logs onto the system with her own fingerprint, and the students register by pressing their thumbs against the plexiglass of a small scanner (with the exception of the Year Eights, who get to give the system the middle finger). A beep signals that a thumbprint has been recognized. Any unauthorized absenteeism is automatically flagged and available to the school office. VeriCool, the makers of the system, claim that taking a register is quicker, the results are immediately available, and that this is a useful weapon in the fight against truancy. The operative word here is 'weapon', but more about that later. When it's time for lunch, the students pay for their food by the same mechanism, and their accounts are debited. This is meant to prevent children being bullied out of their lunch money... 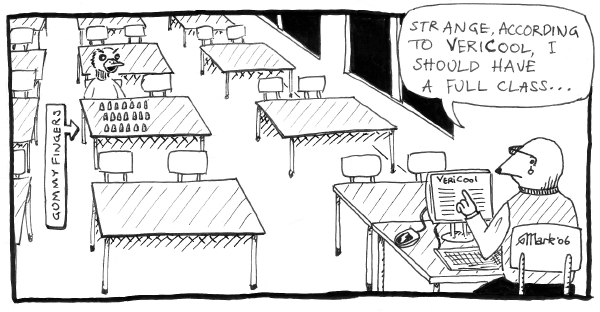 Now to the reality. The plexiglass of the scanner regularly gets scratched or broken when students, either inadvertently or in an act of sabotage, drop keys or other objects onto it. Sometimes VeriCool will stop recognizing a student's fingerprint, which means that the student will have to reregister at the school office. According to one student, "VeriCool can register you as someone else." If a student is absent from school, the parents have to ring the so-called absence hotline. But these authorized absences often do not make their way onto the system until late in the day, which means that students are often flagged as truants. A further threat to the system comes from a study that has shown how easy it is, using cheap ingredients available from supermarket shelves, to literally cook up 'gummy fingers' (Impact of Artificial "Gummy" Fingers on Fingerprint Systems), which students can use to register absent classmates. Imagine the surprise of a teacher facing a class of twenty, when her electronic register claims there are thirty present.

But these are minor inconveniences compared to what happened to the VeriCool system earlier this year. Says one student, "if it stops working, the computer system crashes." And indeed, as another student reports, some three weeks before the Easter break the VeriCool system crashed, taking the entire school computer network with it in an information blackout. As a consequence, teachers had to revert to taking manual registers, if they took any at all, IT lessons became meaningless, and students could not borrow books from the library (somewhat ironic, as VeriCool claims that the system leads to increased borrowing). In the whole school there was only one computer that was available to the 1500 students. It took a further week after the Easter break to get the system running again.

IVC is actually one of few schools who asked parents for permission. But this turned out to be a meaningless gesture, as parents who withheld their permission quickly found out. The parent of one student says that the school handled parents who objected as dissenters. "It was obvious they were trying to railroad the system." Assurances were sought that students would not be discriminated against for a decision their parents had taken. But none were provided, and expectations were confirmed when the school year started. One parent's experience was that, particularly in the first term, the children whose parents had withheld permission became the object of derision and forced to wait until all the other students had registered electronically, and generally "treated as a nuisance". They were subjected to a number of inappropriate comments, mainly from a few individuals who maintained a systematic harrassment. That is until the parent put in a formal complaint, when the behaviour ceased abruptly. But there are fears that in the next academic year, with different teachers, all this could start again.

What are the reasons that parents object to fingerprinting? Most importantly, there is the potential for identity theft. The school has provided assurances that the data is maintained on a secure server yet when questioned about remote, wireless access to the system via laptops in the classroom the school were unsure about how secure their network really was, and therefore how liable the data is to potential misuse. When questioned about the school's claims for the security of the system, the response of a support engineer who maintained IVC's computer network comments is illustrative – outright laughter. It is no surprise that some parents have little or no faith in the school's security policy. One parent voices a second objection to the system – that it removes human contact between a teacher and her students – "you [should] educate students in a focussed and engaged environment, not one where there is no [interaction] between the teacher and the student." As I see it, rather then engaging students as individuals, at the beginning of each lesson they are made to line up like prisoners for a roll call.

But even if the system worked, why would we need it? Students still have to register one by one, so there is no gain in efficiency in time taken to register. And because of ongoing problems with the readers, a number of classes have reverted to registering manually. The fact that the data are automatically collated and centrally stored could just as easily be achieved by the teacher keying the register into her computer. In fact, the system reportedly works without the fingerprint scanners.

What about the bullying argument? I would argue that the way to deal with bullying is not to take away the opportunity for bullying in one area – it will just pop up in another one. Surely the way to deal with it is by taking it seriously and dealing with it sensibly as soon as it occurs. That is assuming that kids don't find a way around the new system. They are smart after all: when schools banned unhealthy items from vending machines, some children started smuggling sweets into school in bulk, and selling them on to willing buyers, undercutting the old prices and making some extra pocket money in the process (BBC news). Bullies aside, students have already discovered that their money is not safe with VeriCool. As one student says: "I hate it because someone registered as me and took £ 4 out of my [cashless catering] account." All this means that some teachers have lost faith in the system, and keep a manual register even as the class trundles past the bleeping scanner. According to one parent, "a couple of teachers are conscientious objectors and refuse to use the system."

Again the military metaphor, again very apt: VeriCool's parent company is Anteon, an American company responsible for the training of US interrogators at the notorious Camp Delta at Guantanamo Bay, and the if possible even more notorious Abu Ghraib prison in Iraq (TES online; full article in the July 21 2006 edition of Times Educational Supplement). Anteon's motto is the sinisterly threatening "When was the last time you felt totally secure?" As their corporate website states, "Anteon is helping federal agencies meet today's Personal Identity Verification (PIV) requirements with flexible end-to-end enterprise solutions that deliver maximum effectiveness for physical and logical security" (Anteon website). In other words, they provide biometric security systems for prisons and the military. And this is the company that owns VeriCool, already providing software to 22 schools in the UK. And as VeriCool is now a technical partner to Capita Education Services, with a client base of over 22,500 UK schools, of which 5,000 already use software fully compatible with VeriCool (VeriCool website), this number can be expected to grow very quickly.

And that's not where the trail ends. Only last June, Anteon was bought up by General Dynamics, a market leader in "mission-critical information systems and technologies; land and expeditionary combat systems, armaments and munitions; shipbuilding and marine systems [including military submarines]" (General Dynamics website). Since information technology is the future of military combat, it is not difficult to see why General Dynamics wanted to acquire Anteon.

We should act to keep these companies and their 'solutions' out of our schools and away from children, whom they want to biometrically track, using the same technology that keeps military bases and civilian prisons secure. But don't rely on the government for support, because systems like VeriCool have the added advantage of familiarizing young people with biometric identification. So that by the time they leave school, and acquire a biometric passport, with their digital photos, fingerprints and iris scans held in a national database, they will be so used to the idea that it won't occur to them why there's anything wrong with that.

But maybe I am being unjust, and children are smarter than that. As one student says, "VeriCool is rubbish and a waste of time! It's inaccurate and you don't know where the information goes." Or as another student puts it, "VeriCool isn't very cool."

More about finger-printing in Australia and UK

Fingerprinting in schools is also happening in Australia - would be useful to find out is there was a concerted campaign ... "Fingerprinting and retina scans eyed up for schools"
By Sue Lowe. January 14 2003

In Briain it's great to see LTKA are compiling a national A-Z list of schools and also naming the biometric systems being used in each.

In the Leics 'Live-register' system, pupils have to (remember and) enter a PIN as well as placing their thumbprint to get their dinner - see pic in the following company link: