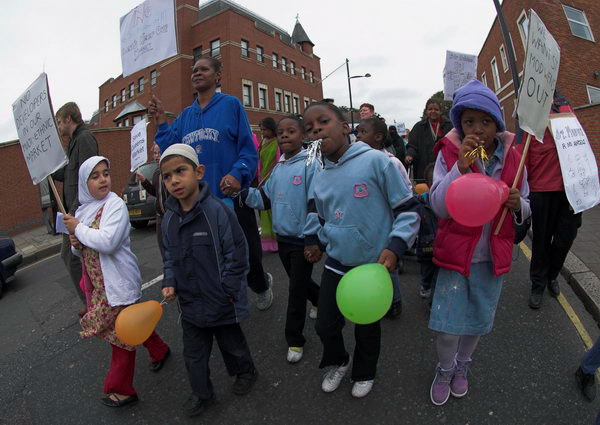 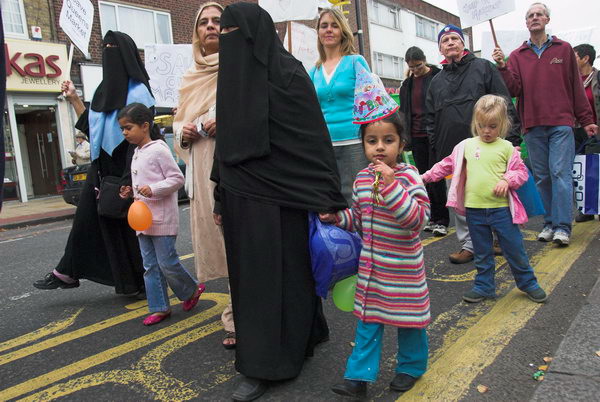 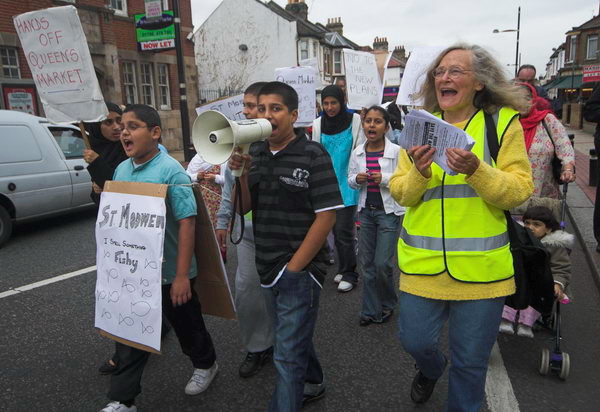 Queen's market in Upton Park is probably London's most ethnically diverse market and business is still thriving after more than a hundred years of trading. The shops that surround the stalls of this covered market make around £ 0.25 million a year for Newham council, supporting the failing badly reegenerated markets in Stratford and Canning Town. It makes a lot of money partly because little or nothing has been spent on maintenance for many years, despite urgent needs.

Locals like Queen's Market because it offers decent quality food at prices signficantly lower even than the cut-price local supermarkets such as Asda-Walmart, and it is also a significant source of employment.

As it states on the Friends of Queen's Market web site,

It's not clear why New Labour Newham Council and particularly Mayor Sir Robin Wales want to go for the £85 million total redevelopment of the site, not least because Labour councillors, who until recently had a 59 to 1 majority on the council, have been banned from discussing it. Asda-Walmart have already pulled out of the scheme, probably because of local pressure, but developers St Modwen Properties stand to make large profits from it while the local community loses out.

The council's redevelopment plans do include a market, but it won't be much like the existing one, with small stalls lacking easy access, and greatly increased service charges, even if rents are fixed for a few years. The plans have less shops too, and rents for these are likely to be considerably higher than at present. St Modwen had the plans on show last week, choosing as venue the nearby West Ham United stadium. Its a place where many current market users - shoppers and traders - would find it uncomfortable to visit, seen by many of the ethnically diverse locals as a bastion of white supremacy.

The redevelopment area is large than the covered market, and includes several buildings, Victorian, Edwardian and modern, whose character would add to a more sympathetic approach. Newham look set to replicate the disastrous redevelopment of the centre of Stratford in the 1960s, which destroyed much of the character of the town, rather than having learnt any lessons from it.

On Saturday 28 October, there was a 'Women's March' from Plashet Park around the area and down Green Street to the market. It wasn't a huge march compared to the 12,000 signature petition to save the Market delivered to Newham Council in September 2005 (the largest they've ever received.)

What was evident was that this was a protest very firmly based in the local community, organised by a small group of local women from different communities in Upton Park. There were few political banners, although the march was supported by local Unison members and two local Green Party members also carried a banner. Most of the placards had been made by some of the kids who were there, who also supplied most of the chants as we marched. Around 100 women and children, along with a few men set off from Plashet Park, with a few more joining along the way, and the support from the shoppers on the streets they passed through handing out leaflets was evident.

The march was enlivened by a samba band, some of whose players were already dressed and made up in preparation for Halloween festivities later in the day (where I met some of them again.) Unfortunately I had to leave before the rally at Queen's Market where the march ended to cover another event. As usual if you want to get a fuller picture of what the march looked like, there will be more pictures on my own web site in a day or two.

It is not only Queen's Market.

Three business groups are to decide the future of Farnborough town centre.