We were told he 'had a Mac-nificent time' when he visited McDonald's' last week. He was given a guided tour, he then went on to tell us:

'I was pleased to visit the McDonald's restaurant in Aldershot on Friday. McDonald's is a great organisation, focused on providing quality and affordable fare for its customers.'

'They are particularly welcoming of families as remember when my children were small.'

Howarth tells us McDonald's serves 'quality fare'. In the infamous McLibel trial a decade ago, the barrister acting for McDonald's admitted in court they serve junk food. Ofcom are to ban the promotion of ads for burgers during children's TV programmes.

Did Howarth get a consultancy fee for promoting McDonald's?

If Howarth were interested in the welfare of his constituents rather than promoting his own self-interests, he would be pictured in a school with the kids promoting healthy eating choices.

A few years back the Rotten Borough of Rushmoor, which roughly corresponds with Howarth's constituency, had a Green Day sponsored by McDonald's!

Would you like chips with that, Surrey-Hants Star, Thursday 18 January 2007 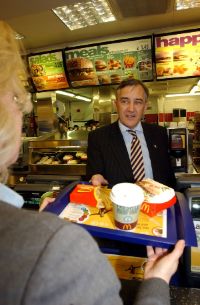 Register of interests,no update since 2005

HOWARTH, Gerald (Aldershot)
2. Remunerated employment, office, profession etc
Parliamentary adviser to the Consumer Credit Association of the United Kingdom, which is the trade association representing the majority of businesses in the home credit industry. (£5,001-£10,000)
Consultant to Aircraft Zone Limited; executive jet charter brokers.
4. Sponsorship or financial or material support
Contribution towards the provision of research facilities for the Conservative frontbench defence team from Sir John Beckwith CBE. (Registered 9 November 2004)
Donation to my constituency party from Mr Malcolm Young of the Wilke Group, property developers. (Registered 11 October 2005)
5. Gifts, benefits and hospitality (UK)
28 June 2005, my wife and I were invited on board a tall ship to celebrate the bicentenary of the Battle of Trafalgar and attend the fleet review by HM The Queen, by Mr Timothy Beardson. (Registered 11 October 2005)
6. Overseas visits
18 January 2005, to Toulouse to attend the launch of the Airbus A380. Flights and transport provided by Airbus UK. (Registered 28 January 2005)


6. Overseas visits
4-7 December 2006, to Washington DC, to address a conference on defence. Cost of the air fare and hotel accommodation met by the Hudson Institute. The conference was part sponsored by Fimeccanica. The visit included a visit to Sikorsky Aircraft, with my air transport from Washington Stratford, Connecticut paid by Sikorsky. (Registered 14 December 2006)