United against (the real) terrorism

On 7 July, 2007, following the failed attack on Glasgow Airport, some 2,000 people gathered in Glasgow to protest against the war of terror at a Scotland United Against Terror rally, which was called by a few young folks from the the Muslim community and was quickly backed by the city's mosques and Islamic organisations. Speakers ranged from religious and union leaders, Stop the War Coalition, to police and government representatives [report].

Meanwhile, four men convicted of the 21/7 bomb plot in London have been jailed for life, while four other were sentenced each to 6 years in prison for 'inciting terrorism' following the Muhammad cartoons protest in London last year. At the same time, a second jury in the trial of two BNP 'non-terrorists' accused of plotting explosions has 'failed to reach a verdict'. The police, meanwhile, continue to use a considerable chunk of their resources to monitor activists. 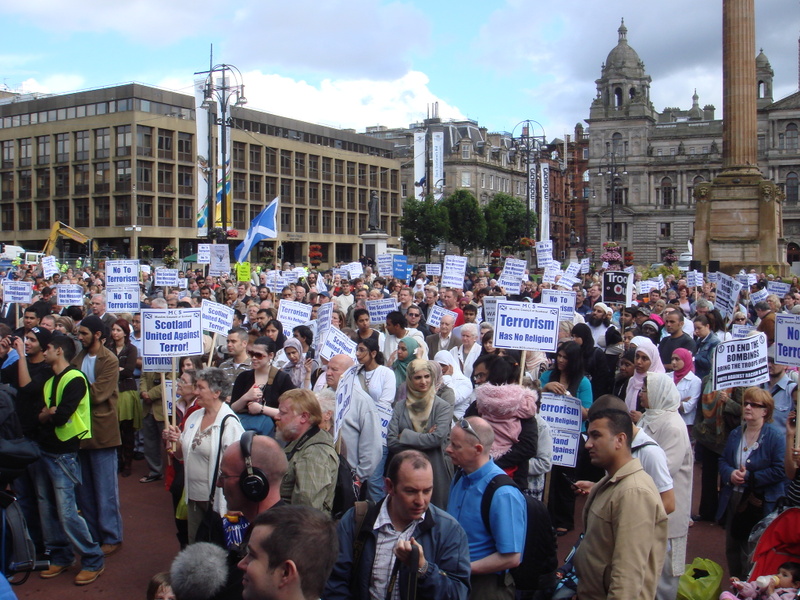 While the mainstream and corporate media's frenzy was, as usual, filled with Islamphobia and demonisation of Muslims, with 'terror fear level' raised to critical, and while the new prime minister Gordon Brown continued with further attacks on civil liberties, some more critical writers tried to ask the more difficult questions.

The initial reaction to the failed 'car bombs' in London from Craig Murray was "cui bono?" (who benefits?). Nafeez Ahmed, who has written extensively on Al-Qaeda and their links to the West, the history of international terrorism and the strategy of tension, asked "whose bombs?", whilst John Pilger said "these are Brown's bombs".

It is worth mentioning that Nafeez Ahmed's above-mentioned article was radically different from his piece that appeared in The Independent on Sunday (see also his recent London talk).