Six months ago, the 25-year old Ungdomshuset (Youth House) occupied social center in Copenhagen, Denmark was evicted by police so that it could be handed over to the new owners, a Christian fundamentalist religious sect. This led to three days and nights of rioting in the city, with observers calling it the most serious internal security disturbance in Denmark since the end of the Second World War. 750 demonstrators were arrested.

This past weekend saw dramatic street actions in Copenhagen, as activists attempted to squat a replacement social centre named "G13." On Saturday 6th, between 3,000 - 10,000 people took part in a co-ordinated day of non-violent confrontation, which was met with heavy police repression. A total of 436 arrests resulted according to Danish mainstream media - a new record for a single police operation. Later in the evening, the G13 press group issued a statement declaring an end to the day's action. Demonstrators made it through police lines into the G13 site, but were cleared from the building by police after several hours of occupation. Despite this, many in the Danish scene believe the day was a success. As one participant said:

Last summer we couldn't do anything as a movement. Whatever we did we couldn't do it together and the police and the media hated us. Then last fall we learned to throw rocks. The movement rediscovered militant tactics. Then for half a year since the eviction that tactic has played out its usefulness. So now, we've developed a new tactic [non-violent confrontation]. As a movement we are now able to do anything.

Although they remain highly suspicious of city council, G13 representatives will negotiate with mayor Ritt Bjerregaard on Thursday. 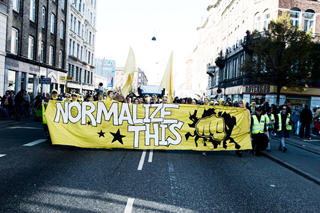 There have been regular demonstrations on the part of Ungdomshuset supporters for the past six months, including violent riots in which police have basically given up control of the streets. In order to escalate the political side of the struggle, activists came up with a simple plan: go squat something big as a replacement for Ungdomshuset, do it in public, and make a bid for renewed public support by doing it in a confrontational but non-violent way. In a brazen display of self-confidence, the organizers released their planned starting point, as well as a full run-down of their planned tactics and the location of the building they plan to squat (an old waterworks).

Before its destruction on 5 March 2007, Ungdomshuset occupied social centre served as a central rallying point for the city's anarchist youth. The building, located at Jagtvej 69, Nørrebro hosted gigs and meetings for nearly 25 years. Its roots as a focal point for the city's left went back over a century.

The building was completed on 12 November 1897, with the name "Folkets Hus" (The People's House). The house functioned as one of the resorts for the then-incipient labour movement of Copenhagen. Since labour organisations were unpopular in the eyes of the authorities, and reprisals were often carried out against them, the organisations had to build their own headquarters — Folkets Hus was the fourth of these to be built. The roots of several demonstrations and meetings were planted in Folkets Hus, and as a result it was strongly linked to the great demonstration against unemployment in 1918 when workers stormed the Danish Stock Exchange (Børsen). In 1910, The Second International held an International Women's conference at the house, during which Clara Zetkin launched the idea of an International Women's Day. Lenin and Rosa Luxemburg visited the centre.

While G13 was happening in Denmark activists abroad have been making solidarity actions, amongst others in Norway and Germany.
In Oslo activists gathered in front of the Danish embassy and in Trondheim support actions have been announced too.
In Hamburg a group of artists were on action against the "yuppification" of the part of the city known as Altona. They wished to connect their struggle against the demolition of culturally significant buildings with G13s struggle for new social and culture centre.
As part of the action the group put up posters saying "Copenhagen needs an Ungdomshus, Hamburg needs an Ungdomshus, everybody needs an Ungdomshus"

A first hand report on the situation the arrested ppl found themselves in can be seen here:

People were left on concrete floor, their hands tied up for hours with no water and so on...

we were confrontative and non-violent

http://ungeren.dk/aktiong13/index.php?ufo=english), from what i have heard there were only 3 bottle throwings, which were stopped immediately by other activists (and one bottle throwed by one from the counter demonstration against us).
There have been an article on the mainstream newspaper politiken's webpage in which the police spokesman apologies for his statements to the international press, which gave the impressions that the demonstrators were violent and destructive. He took the blame and said it was because of his imperfect english skills.
The fact is that we were between 3-6000 thousands demonstrators ready practice civil disobedience to get a new social centre. The police used dogs, battons and an amount of cs gas never seen in denmark before. Also they arrested a total of 437 people,which is a new danish record of arrestings done in a single police action.
All the time demonstrators used the confrontive, but non-violent, methods accepted by all. That meant people pushed police lines, climbed over secured policevans, used ladders to get over fences, used tools for cutting fences, used gasmasks to stay inside the gassed areas (though we could have use ALOT more gasmasks), ran around in 4 big decentral groups, crossed railway tracks.

After the action one of the police highest in the copenhagen police hierarchy (chief policeinspector, don't know if that is an english term) asked publicly the politicians to make a political solution to the youthhouse problem. He said that their resources where being spoiled by actions like this and that he wanted them used for more serious matters.

All the activist coverage I've seen of the event has stressed how non-violent the demonstration was, while the mainstream media have trotted out all the usual bullshit about violence...I don't have any particular ideological attachment to either violence or non-violence, I'd just be interested to know whether the demonstration ever moved beyond passive resistance, or is it all just media bullshit?

cops beating the crap out of people or people chucking molotovs is sexy tv.
people sitting down in a road with a banner isn't.
what would you rather watch? a burning car or a fucker with a placard?