On Saturday 25th October 2008,several hundred people attended the 10th Annual United Families & Friends Remembrance procession which was led by many family members of those who have died in suspicious circumstances in police custody, prison and 'secure' mental health facilities.

In customary tradition the procession made its way in dignified silence from Trafalgar Square down Whitehall to Downing Street in dutiful respect to those who mourn the loss of loved ones and to invoke their memory and the collective injustices that their deaths represent. In the past year 182 such deaths have been recorded recorded, and a banner carried in the march listed over 2500 who have died. 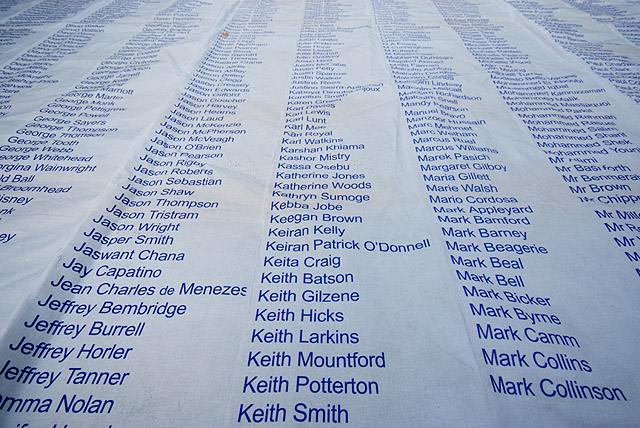 An appaling roll-call of the dead.

The procession stopped at Downing Street and family members came forward and attached bouqets to the gates. The procession then returned to Trafalger Square, where a number of family members of the victims of injustice spoke. Their speeches highlighted an almost complete lack of accountability within the police, prison and mental health service whereby healthy people, mainly but not all black, continue to die in police and psychiatric custody and in prisons. Several talked about the indignity of not getting a fair trial in the courts and a criminal justice system which has consistently failed them.

Amongst the families who spoke at Parliament Square were the sister of Jason McPherson, who died after being held down by 10 cops in police custody in January 2007 after being prevented from being allowed to have use of his inhaler despite repeated pleas. The cause of Jason's death is still not established, as the family are still awaiting for pathology and post-mortem reports over 20 months on, one of which being the family's own independent post mortem.

The mother of Paul Coker also spoke. Paul died on 6th August 2005 aged 32 in a cell at Plumstead police station, South East London, just two hours after being arrested for causing a breach of the peace. Up to fifteen police officers arrested Paul, and the initial postmortem was inconclusive.

thanks for making this a feature here on the mainpage as well (saw it just now), because the march is clearly a national rally with families attending from all over.