Sustainable Energy — without the hot air is an book about the UK's energy crisis, it's essential reading. 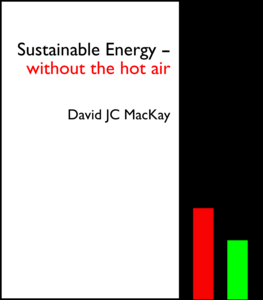 Sustainable Energy — without the hot air

What’s this book about?

I’m concerned about cutting UK emissions of twaddle – twaddle about sustainable energy. Everyone says getting off fossil fuels is important, and we’re all encouraged to “make a difference,” but many of the things that allegedly make a difference don’t add up.

Twaddle emissions are high at the moment because people get emotional (for example about wind farms or nuclear power) and no-one talks about numbers. Or if they do mention numbers, they select them to sound big, to make an impression, and to score points in arguments, rather than to aid thoughtful discussion.

This is a straight-talking book about the numbers. The aim is to guide the reader around the claptrap to actions that really make a difference and to policies that add up.

This is a free book

I didn’t write this book to make money. I wrote it because sustainable energy is important. If you would like to have the book for free for your own use, please help yourself: it’s on the internet at www.withouthotair.com.

This is a free book in a second sense: you are free to use all the material in this book, except for the cartoons and the photos with a named photographer, under the Creative Commons Attribution-Non-Commercial-Share-Alike 2.0 UK: England & Wales Licence. (The cartoons and photos are excepted because the authors have generally given me permission only to include their work, not to share it under a Creative Commons license.) You are especially welcome to use my materials for educational purposes. My website includes separate high-quality files for each of the figures in the book.

How to operate this book

Some chapters begin with a quotation. Please don’t assume that my quoting someone means that I agree with them; think of these quotes as provocations, as hypotheses to be critically assessed.

At the end of each chapter are further notes and pointers to sources and references. I find footnote marks distracting if they litter the main text of the book, so the book has no footnote marks. If you love footnote marks, you can usefully add them – almost every substantive assertion in the text will have an associated note at the end of its chapter giving sources or further information.

The text also contains pointers to web resources. When a web-pointer is monstrously long, I’ve used the TinyURL service, and put the tiny code in the text like this – [yh8xse] – and the full pointer at the end of the book on page 344. yh8xse is a shorthand for a tiny URL, in this case: http://tinyurl.com/yh8xse . A complete list of all the URLs in this book is provided at http://tinyurl.com/yh8xse .

I welcome feedback and corrections. I am aware that I sometimes make booboos, and in earlier drafts of this book some of my numbers were off by a factor of two. While I hope that the errors that remain are smaller than that, I expect to further update some of the numbers in this book as I continue to learn about sustainable energy.

How to cite this book:

'We have got an addiction to fossil fuels and it's not sustainable.' -- David MacKay

'We often hear that Britain's renewables are "huge". But it’s not sufficient to know that a source of energy is "huge". We need to know how it compares with another "huge", namely our huge consumption. To make such comparisons, we need numbers, not adjectives.' -- David MacKay

Early hours of yesterday morning I was cursing David MacKay, though for all the right reasons.

David MacKay is a breath of fresh air. He cuts through the crap, with Ian Fells at one end of the spectrum gung-ho about coal and nuclear, to hype from advocates of renewables at the other end of the spectrum who believe all our energy needs can be met with renew ables but without doing the sums.

David MacKay does the sums. He puts numbers to all his scenarios. He makes assumptions, produces simple models, but at all times the assumption are made explicit.

He deals with ball park figures. For examples, let us assume we cover 10% of the UK with wind turbines (not in reality possible), but knowing the average wind speed, the power generated in watts per square metre, we have a figure for the total output.

We can do similar calculations for the average car journey etc.

We know what our wind turbines are capable of, we know what our electricity demand is. The former exceeds the latter, and hey presto, problem solved. Unfortunately not so. Electricity is not our only energy demand, we use energy in transport, we use energy to make stuff, whether it be the tat that makes a one way trip to landfill or the material we use to build our homes.

He deals with easy to comprehend figures. An electric kettle at 3kw boiling water for 20 minutes is 1kw-hour. Why is the kettle 3kw? That is the maximum power for a 13 amp socket.

David MacKay starts from the premise that whatever we think of Peak Oil and whether or not we are about to shortly hit that peak, our fossil carbon resources are finite and sooner or later they will become exhausted (or at least not economically viable to extract). We also cannot continue to pump carbon into the atmosphere and David MacKay assumes cuts of 90%. A third premise is that of security of supply.

A few myths are demolished on the way.

Turn off all those mobile phone chargers in the home, look at all the energy we save, every little bit helps. Little is the important word. Multiply a very small number by a big number and we still have a small number. A mobile phone charger when not charging is consuming maybe 1 watt. This is a fraction of one percent, an insignificant part of our household energy demand.

Do switch off your phone charger if it makes you feel good, but just remember it is about as effective as baling out the Titanic with a teaspoon!

If we are to get anywhere, we have to think big.

Common sense tells us that a large electricity power plant is inefficient, look at all that waste heat going up the cooling towers. Even worse when we consider that high grade electricity is being used for low grade space heating, worse still when we think that to provide that electricity for a low grade use, we have thrown two-thirds of the low grade heat away. Combine heat and power plants is the obvious solution. The output is what we want, heat, electricity is a waste product generated at lower efficiency, but the overall efficiency is much higher.

Wrong says David MacKay. It is much better to use electricity for space heating. This seems to me to go against the grain, but what David MacKay says is we use the electricity for heat pumps. We use 1kw of power to pump 3 kw of heat, and into our building we get 4 kw of heat. Nothing else comes anywhere close to matching this for efficiency.

The best heat pumps, recently developed in Japan, have a coefficient of performance of 4.9; this means that using 1 kWh of electricity, the heat pump delivers 4.9 kWh of heat in the form of hot air or hot water. This is a far more efficient way to use high-grade energy to make heat, than simply setting fire to high-grade chemicals, which achieves a coefficient of performance of only 0.9.

The conclusion David MacKay reaches is that we could just meet all or energy needs with renewables, but he has taken no account of cost, social or environmental impacts. If we take these into account, we cannot meet our demand from renewables. The options we then have is to reduce or energy demand through lifestyle changes and efficiency measures, but even then he does not believe renewables will be enough. We then have the options of nuclear, unproven clean coal which is still using a finite resource (as is nuclear) or renewables located in another country, for example solar in North Africa. By advocating nuclear to fill the energy gap he is echoing the same scenario as James Lovelock. [see The Revenge of Gaia].

David MacKay thinks it is so important to get the message across, that he has placed his book on the net in the public domain under a creative commons license. For traditionalists like myself, it will be available in book form in the New Year.

David Mackay is Professor of Natural Philosophy in the Department of Physics at the University of Cambridge. As one would expect from a Cambridge academic, the book is well referenced. It is also highly readable.

One small gripe, David Mackay occasionally cites Wikipedia as a reference source. One would have expected better from a Cambridge academic!

Highly recommended. A must read.

How to recycle everything!, The Ecologist, 30 August 2008

Audio of a presentation by David MacKay

There is a one hour MP3 of a talk he gave in March and here:

And these are the closest set of slides he has (from another talk):

The book is well worth reading as well.

The energy cost of “Defence”

David Mackay of The Royal Society (bastards) has produced an excellent guide to balancing State energy budgets.
It is online;

http://www.withouthotair.com/; and printed as a Creative Common.
It includes The energy cost of “Defence”; a rare and important attempt at a fully referenced quantification of this.
He welcomes new information for future editions. It would be interesting to see consumption plotted against class.