Climate Camp in the city

For twelve hours, a narrow granite and concrete crevice in the city, normally swilling in dirty money was transformed into a ribbon of colour and music. While the rest of the city raged, gambled and gleefully rolled the earth towards runaway climate change, climate campers opened the street to people and relaxed in the sun. Workshops educated us, stand-up poets and musicians entertained us and a zero carbon kitchen fed us. 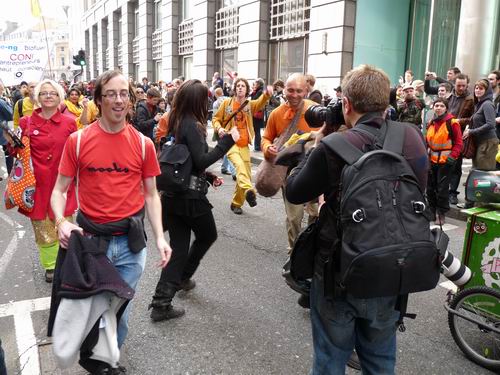 Street dancing within the first minute of camp 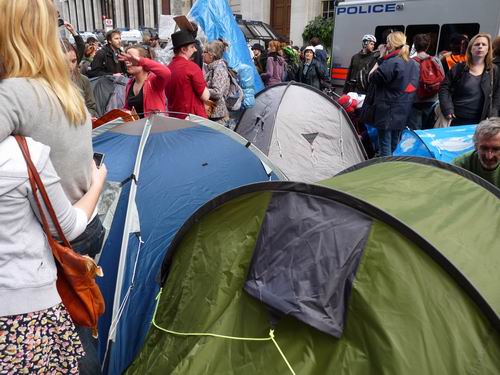 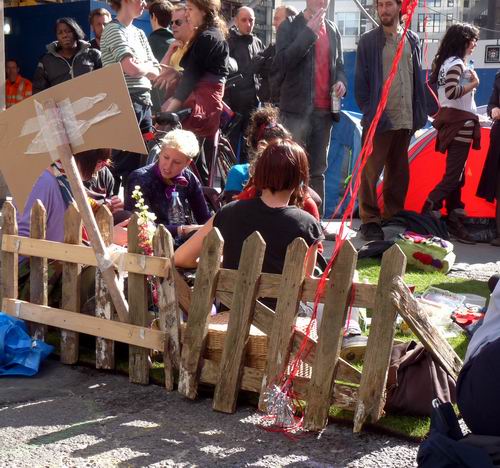 Suburban lawn brought to the city 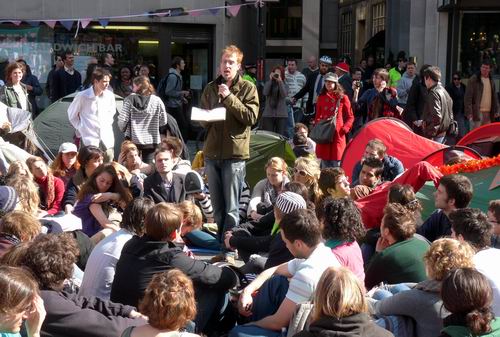 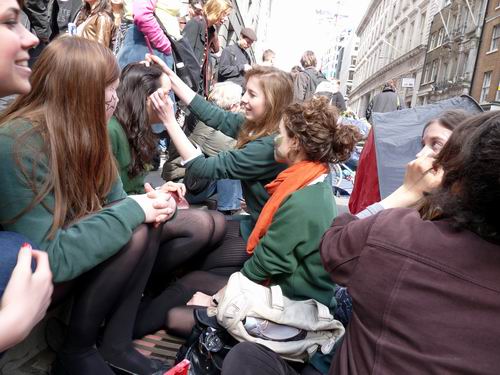 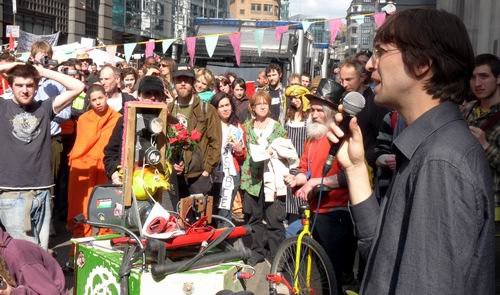 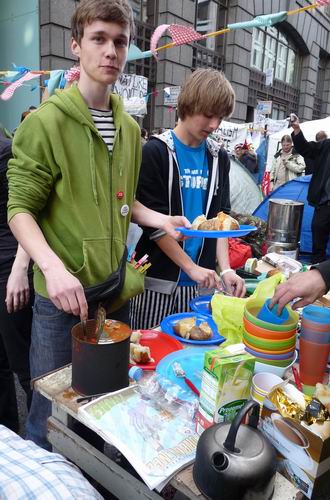 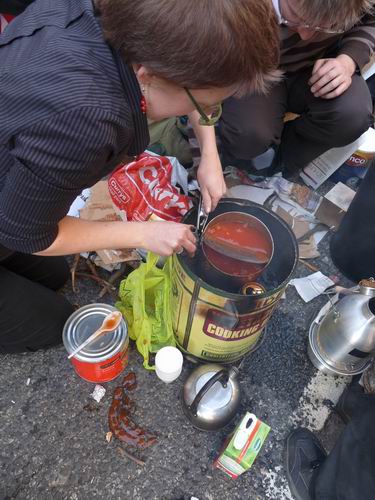 Hot beans and beer? from the rocket stoves 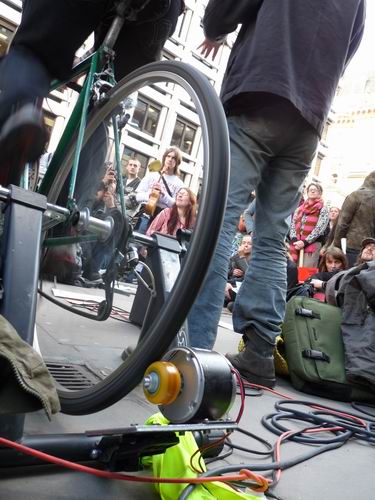 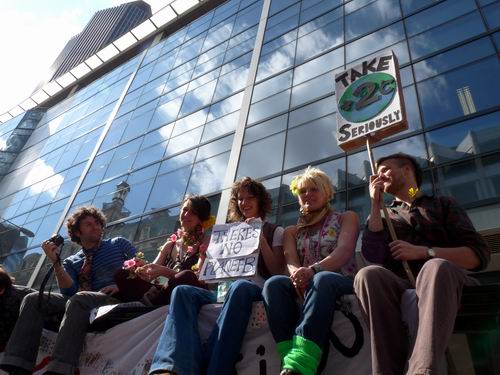 The big picture, scroll left & right to see all 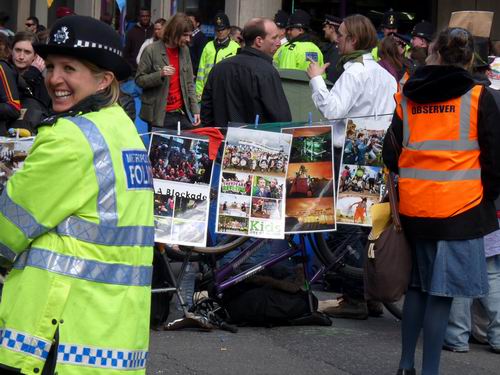 Maybe the police are not so bad... 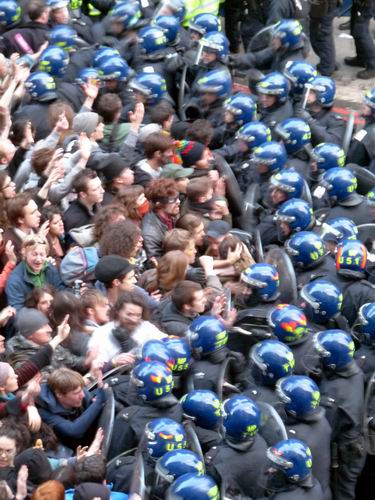 The way the climate camp swoop worked was brilliant. There were small groups of people with circular tents on their backs hanging around in the nearby streets and then suddenly at 12:30 - Bishopsgate was chocka with 2-3 thousand people. It was cheering to see that it is possible to overcome the stereotype of vague activist timing as within just a few minutes, it was as if we'd been there for hours as a tent city popped up and bunting and banners flew between the street furniture. Journalists from all over the world were tip-toeing between the crowded tents and doing live interviews. Not much later a kitchen was serving up food and workshops on the evils of carbon trading were in full swing. Bored city workers ventured into our little world and far from feeling alienated, actually enjoyed the experience. I didn't see a single "outsider" scowling so much as once during the day. Some local school girls spent their free afternoon really immersing themselves in the fun and spectacle.

How things changed at 7pm though. By then the mainstream media had returned to base to file their reports or rushed to capture the more sexy rioting elsewhere and the light was becoming too low for good filming. With no provocation, riot cops with battering shields and flailing batons came storming into climate protesters who offered only upstretched palms as resistance. They succeeded in taking just 10 metres of street back and I found myself comparing their action with famous WW1 battles for the absolute pointlessness of their brutality. And then the police in a truly infantile display of their hyper-active toddler mentality screamed in with flashing lights and wailing sirens displaying 8 of their newest macho toys for boys - Humvee like armoured police trucks that could have rolled straight off the set of some futuristic police state Hollywood film. It would be comical if it weren't so tragic that this is the new style of policing in 21'st century Britain. Considering how the Joint Commitee on Human Rights report had just warned that such immediate resort to aggressive police tactics inflamed public order situations, it was like the police were collectively wiping their filthy arses on that report. The lunacy of their tactics continued as although they presumably wanted to clear us from the street, they imprisoned us in that same street for 5 hours, not letting anyone out until the small hours. Conditions became pretty squalid by then with rivers of piss running along the pavements and gutters. If you transform a living space into a prison, the occupants will hardly maintain and respect it in the same way. It was a shattering end to what had been a joyful and empowering day. Anyone coming on such a protest for the first time will have experienced a complete reality shock and will for ever see the police in a totally different light. But this seems to be part of the master plan - to step by step make it less and less acceptable for anyone to protest about anything going on in this wickedly unjust world except in the most utterly ineffectual manner.