The grim (but not unexpected) admission that the COP15 UN Climate summit next month will not secure a new treaty on climate change has finally been made (see links below).

Those watching the developments over the last month will not be surprised. Each day seemed to bring another statement pushing the hope of a deal back further and further.

Over the last week at the Barcelona pre-COP15 talks, there have been crisis meetings to discuss fall-back positions. The African bloc walked out with the support of the G77 group of 130 countries, with further support from other countries and NGOs whilst campaigners demonstrated in the streets and blocked entrances (see 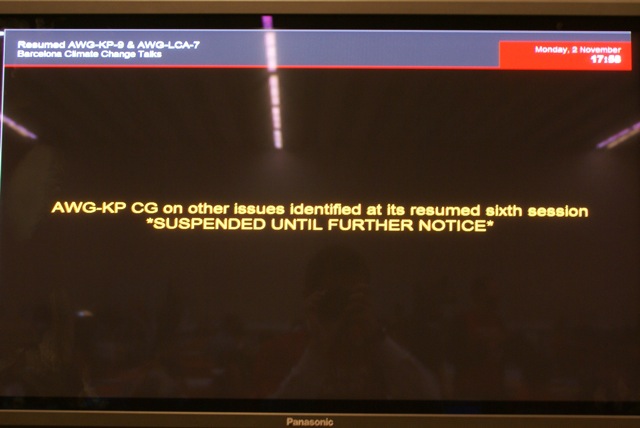 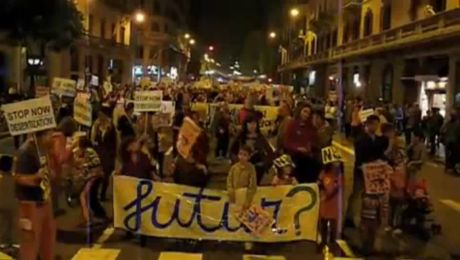 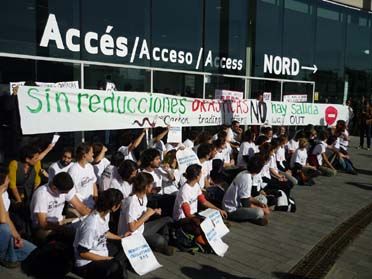 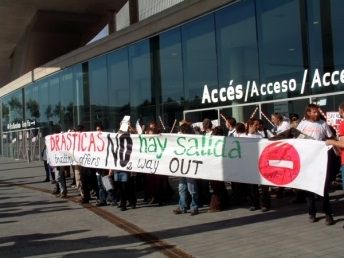 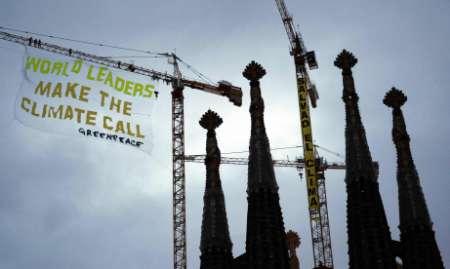 Saleemul Huq from the International Institute for Environment and Development (IIED) said of the African walk-out: "It's a moral stance, it points out the difference between a good and a bad deal. A good deal is defined by what is good for the planet. Africa will feel the consequences most of a bad deal. If you are an African country you have much more at stake than a rich country. They are rightly confused by the talks and angry."

Kamese Geoffrey of Friends of the Earth Uganda warned: "Rich countries are attempting to dodge their legal and moral responsibilities to reduce emissions. Developing countries and communities have historically had practically no fault in the creation of climate change, yet they will be the first to face the devastating impacts of climate change."

The last three days has seen the reality hit home with announcements that there will be no deal at Copenhagen. Perhaps a legally binding framework some said on Wednesday - today even that looks ambitious.

With around 30 days left before the Summit starts you can expect much talk of Plan B. Perhaps Copenhagen will be the start of a process leading up to a real treaty in Mexico in 2010? Perhaps it will simply be business as usual.

Over the last few years we've seen the likes of Al Gore and Jim Hansen (NASA climate scientist) asking why people are not engaging in more civil disobediance and direct action around climate change.

A few weeks ago we saw over 5000 events taking place in over 180 countries, a truly global outpouring of support for radical reduction of CO2 emmissions via the 350.org initiative.

"A whole host of inspiring and crucial struggles are taking place in Southern countries that don’t necessarily identify themselves as being about ‘climate direct action’ and don’t enjoy the privilege of as much media coverage. Yet these struggles are also of key importance in the fight for climate justice – such as the indigenous communities in the Peruvian Amazon fighting to resist the expansion of oil companies, and the organising efforts of peasant communities the world over...

With the Copenhagen summit doomed from the outset from agreeing anything that would begin to meaningfully address the threat of climate change, and with governments the world over failing to stem the tide of new carbon-intensive infrastructure, there is a clear role for mass civil disobedience and targeted direct action."

And so back to Copenhagen. While the world watches thousands of people will come together at the Klimaforum09.org to discuss and plan their own strategies, from increasing lobbying efforts to strengthening global networks of resisitance and comparing adaption strategies. Whilst it's true they represent a tiny minority of the people worldwide engaged in campaigning and solution-based action, it's essential their voices are seen and heard during the summit and not just as a forerunner to the main negotiations.

Similarly thousands will demonstrate on the streets of Copenhagen, mirroring the marches, protests and conflicts around climate change seen across the world.

Perhaps the biggest direct action will be the Reclaim Power! protest on Wednesday 16th December, that intends to push towards the COP15 summit venue and hold a People’s Summit for Climate Justice (see

A spokesperson said: “On the 16th of December, CJA will put climate justice and the voices of marginalized peoples from across the North and the South at the top of the agenda. Led by activists from the Global South we will challenge the corporate and governmental elites at the UN climate talks, overcoming police barriers with civil disobedience to hold a People’s Climate Justice Summit.”

The action is called for by Climate Justice Action, a network of a wide diversity of groups from both the global north, and the global south. Among them are Terra de Direitos (Brazil) and Focus on the Global South, international Climate Camps, Rising Tide and Indian Social Action Forum. Importantly the action is supported by members of the Climate Justice Now coalition which was formed in Bali during the COP13.

The fact that the COP15 summit is taking place hot on the heels of the ten year anniversary of the Seattle WTO protests (November 30th 1999) is not lost on many commentators. The massive protests and direct action that initially shut the summit down were characterised not only by severe police repression, but also by the wide breadth of coalitions who stood together united against exploititive policies which put profit before people and planet, both inside and outside of the talks. The WTO talks collapsed amidst accrimony and tear gas and thus Seattle became a symbolic reference point for an 'anti-globalisation' movement that had already held co-ordinated protests throughout the world earlier that year on June 18th.

The parallels are striking, yet there is a key difference. Seattle and the 'anti-globalisation' movement was also characterised by what was often called a rainbow coalition of campaigns and concerns, who (despite some pretty clear demands) often faced criticism for failing to articulate what it stood for, rather than what it stood against.

The cause uniting people around COP15 is clear, and it's not going to go away.

UN: Climate treaty talks may go on for another year

No global climate change treaty likely for up to a year, negotiators admit

14 Dec:
* No Borders, No Climate Refugees! (Day of action in Copenhagen. Call to action to international no borders groups during the COP 15 in Copenhagen:

18 Dec:
* (last official day of the summit) – NTAC actions throughout the city (

Another action in Barcelona in the last day of the Summit 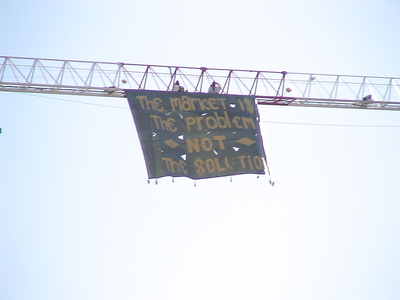 Today Friday 6th November, at 9.00am, two activists have climbed a crane near to the entrance of the UN's Barcelona Summint on Climate Change. They unfurled a 40 m2 banner denouncing the market solutions to C02 emissions. The banner read: "The market is the problem, not the solution".

The two activists have resisted the strong winds blowing on top of the crane for over an hour, at which point they decided to climb down without any problems. One of the two activists then moved towards a group of delegates that was standing by and told them: "The climate is not for sale. The problem is the market, the capitalist system, and the co-option of States by the obscure interests of multinational corporations".

The Summit ends today with very bad results and no concrete agreements, as well as many fresh doubts about the possibility of reaching any 'agreement' during the Copenhaguen summit in December.

This week (monday 2 - friday 6) the Barcelona International Climate Change Talks are happening, five days of formal negotiations, in the lead up to COP 15. Since Saturday there have been a series of actions in the cities streets as well as at the conference centre to raise awereness, to unite eco movements and to try to force change during this window of opportunity in the conference centre at the far side of Montjuic. But will it be enough to get us out of our AGE OF STUPID? Perhaps not, news has just come through today that African countries have abandoned the talks.

Saturday - Manifestation in Barcelona streets; "The climate is not for sale":

At about 5pm this evening as the closing plenary of what can only be seen as a very disapointing climate talks in Barcelona, 2 people got up with a banner and walked toward the front stage shouting "Markets are the problem, not the solution". The banner appears to have read "Obama is finishing what Bush started".
They were quickly jumped upon by security guards at the conference and wrestled to the ground. A third person stood up and came to their aid, it appears she was taken away from the plenary by the security guards.

All three were evicted from the conference, no arrests were made.

Earlier that morning at 9am a banner was hung from a crane in a building site adjoining the entrance to the conference, it also read "The market is the problem, not the solution". El clima no està en venda! (The climate is not for sale) seems to be the loose group responsible for some the weeks bold direct actions.

Also today there was another creative stunt inside the conference; Aliens landed at Barcelona climate talks, looking for planet earth's climate leaders. Dressed in White overalls with Green skin and zogabongs aliens had speech bubble placards that read "Where are your climate leaders?" and "Are YOU a climate leader?". Their action happened outside what seems like the US delegate base and seems to be part of the TCKTCKTCK group.

Outside GREENPEACE people were giving out the days POSITIVE newspaper from Saturday December 19 2009... When (hopefully) the climate deal to save the planet is done.

2nd report - Today two climate activists sneaked into the main plenary inside the United Nations climate change talks in Barcelona to send a message about the polluting interests trying to profit off of the climate crisis. Loudly unfurling a a banner reading Stop C02lonialism they shouted messages about the dangers of carbon trading and were met with thunderous applause. They were immediately dragged out by police.

Videos of the action: