On Monday 18th January, the first anniversry of the final day of the Israeli massacre in Gaza, Smash EDO are holding a mass demonstration in Brighton against arms manufacturer EDO/ITT. Indymedia will be running an up to the minute timeline of events for the day.

Be the Media:Phone or text in your reports from the demonstration to Indymedia Dispatch on 07943685168 (from Monday morning).

Arrests - So far we know of four people who have definitely been arrested. Three have been released on police bail until March. Those who live in Brighton have been given bail conditions restricting protest at EDO/ITT, non-Brightonians have been bailed away from Brighton. It seems that the police have been deliberately targeting action medics.

Update on the Squat raid - Reports have come in that the police who raided the squat last night were armed with tasers and at least one gun. The person who was arrested has been released without charge.

19.26 - There have been four or five arrests in total. Several for breach of section 14 and one for threatening behaviour. Legal support are outside the police station waiting...

17.43 - Police have snatched two people, including an action medic, out of the cordon on North Rd.

17.42 - People have attempted to reach Barclays on North St. Some people made it.

16.17 - The demo is now marching alongside St Peter's Church toward the Old Steine. People are beginning to disperse.

16.10 - A crowd of about 300 has reached the junction between Lewes Road and Elm Grove. The police are attempting to prevent them from going further. A kettle may be forming.

16.00 - Reports are coming in that EDO/ITT has closed for the day

15.52 - The demo is now moving again, with the police in front, toward Brighton on the Lewes Road. There are about 150 people in the main section. No arrests so far

15.45 - Cops now blocking Lewes Road at Comet. Some people are corralled in the car park of Brighton university. Lines of riot police in front of lines of riot vans are at the front of the demo.

Click here to view the rest of the timeline 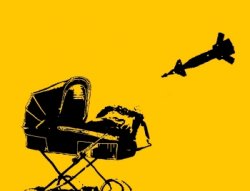 15.37 - The front of the march is now at BandQ on Lewes Road. Police have effectively shut down Lewes Road. The police tried to stop protesters by Brighton university but were outflanked as people "fought their way down the road". The march is continuing towards town and people from the second bloc are joining it in dribs and drabs.

15.34 - Police units KB 3B, KB4A, KB4B, KB4C in several vans are racing after the bloc that has moved off into town on the wrong side of the road. Some of the activists from the second bloc, which went into the park,

15.29 - Original demo, which stayed at the bottom of Home Farm Road, is now marching into town along Lewes Road

15.28 - Lots of sirens going off at the bottom of Home Farm Road

14.56 - One of the fences close to the rear of EDO has been breached. Police have responded violently.

14.55 - There are around eighty people at the original demonstration at the bottom of home farm road with coffins, banners and sound systems.

14.50 - Protesters seem to have breached a fence at the back of the industrial estate and have dropped onto a roof

14.43 - Reports in that a stand off is still going on with police on horseback at the rear of the factory

14.39 - The majority of people in the woods have been dispersed from the back of EDO by police with dogs and mounted police. They are now in the park above EDO.

Anti-Militarist actions elsewhere... Kernow Action Now are holding a demonstration today outside Barclays in Falmouth calling on Barclays to cease providing market maker services to ITT (click here for more info on Smash EDO's Target Barclays campaign). Barclays in Hastings have also been picketed. In Nottingham today activists from the Shut Down Heckler and Koch campaign are holding a street theatre event in market square.

14.35 - The bloc in the woods has reached the rear of EDO/ITT, police are attempting to form lines in the woods and encircle protesters to escort them out of the woods, however not succeeding yet.

14.30 - From The Argus 'Liveblog' - Many of the protesters have crossed open land behind the factory at the southern end of Wild Park where police officers and horses stand at the rear of the factory. Having gathered behind the factory on the open land, the police line opened to allow protesters down a footpath along the back fence of the industrial estate. There's now a stand off with police blocking their progress along the footpath. The protesters are now attempting to climb along a steep bank between the Forfars factory compound and the railway line but police are not allowing the protesters through.

14.09 - Around 200 people have split off from the main demo, pushed through police lines, and are now heading uphill into the woods... police are dithering.

14.04 - The funeral procession has reached the bottom of Home Farm Road

14.03 - From The Argus 'Liveblog' - The march has moved off towards Lewes Road. Behind banners saying "Blood on your hands" featuring red handprints and "Remember Gaza" the protesters are shouting "Smash, smash, smash EDO". The protesters are about to reach the Lewes Road and a small line of police officers is forming with officers on horseback ahead of the march.

13.58 - Police have informed local businesses that they will close Home Farm Road today and it will be closed until 6pm. EDO's switchboard is closed for the day. The officer in charge of the operation is Inspector Cundert. Police have claimed to The Argus that today's demo is being handled by Brighton public order coppers, not other forces...

13.50 - The demonstration is now moving off from the Wild Park Cafe

13.40 - A short speech is being read over the megaphone about Israel's 22 day massacre in Gaza and EDO's complicity

13.35 - Estimates are now 200-250 people all masked up and in black at the meeting point. The police have only one camera person. Large notices have been erected at the bottom of Home Farm Road. One person is dressed in a top hat and theatrical funeral garb.

13.33 - A large black clad crowd is still gathering at the Wild Park Cafe

13.20 - The Argus is running an online poll on whether Smash EDO's demonstrations should be banned or not here

13.10 - There are lots of police - half a dozen bikes, four cars and half a dozen vans on Home Farm Road. There are two cages built with Hares fencing 100 metres up the road on either side. Signs have been placed on the fencing.

13.06 - The police Gold Command is standing at a vantage point in the Wild Park opposite the cafe with four police horses... More people are arriving all the time

13.06 - There are three coffins and banners saying Remember Gaza, ready for the funeral march, at the Wild Park Cafe. A sound system is (predictably) playing Rage Against the Machine

01:40 - Police kick the door of a local squat down and enter on the pretext that they are investigating a "burglary". Eleven people confined to one room until 7am. Police request details and arrest one person for not supplying them with a name. In the morning a letter was hand delivered to the police saying that the council planned to seek a possession order but haven't done so yet. The squat has not been evicted but there are police outside and the front door is broken. Residents say the raid was clearly linked to the Remember Gaza demo as participants in the demo were staying there.

17/01/10 - 17.30 - Officers from the FIT team are outside the Cowley club taking notes on people going in, no cameras though. One activist has been harassed by the FIT 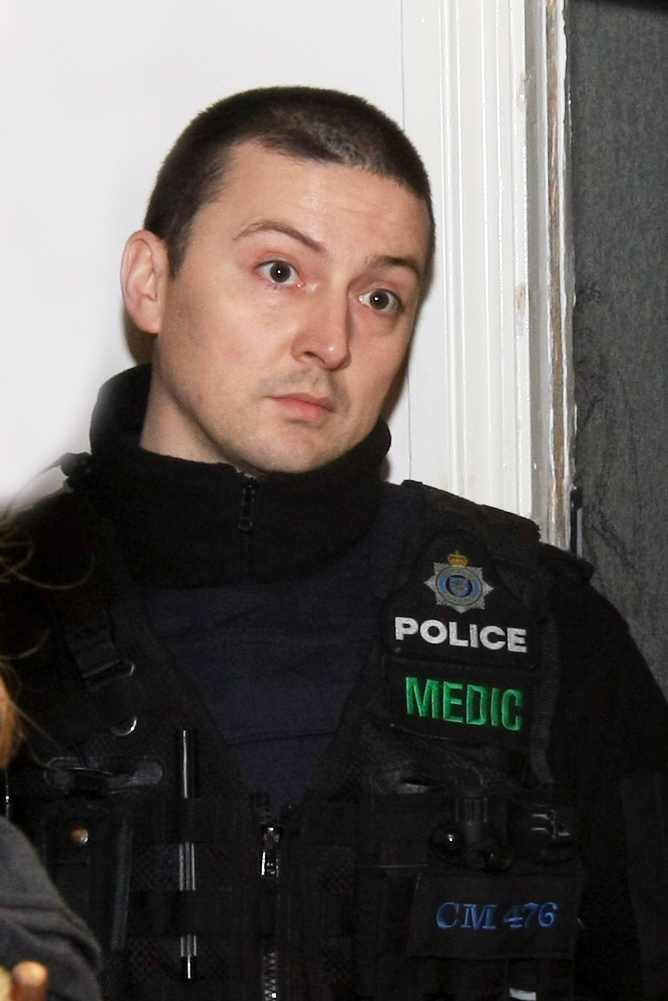 The police officer who raided the squat wearing a pistol

Hi, just a quick note to say I was the person arrested at the College Terrace squat in the early hours of the morning before the EDO MBM demonstration on Monday.

Police smashed their way into the squatted premises at around 02.00 hours, without any advance warning, and corralled and detained the tenants in an upstairs bedroom.
The initial fear was that the premises were being attacked by Nazi thugs, because those of us in the front room at the commencement of the raid only saw two men in black, one with short-cropped hair (and later found to be armed with a pistol), the other completely bald, battering their way in.

Once they gained entry, a senior female police officer claimed they were pursuing a 'man in a grey tracksuit' that was a suspect in a burglary, which they were convinced had been seen entering the squat. They claimed a police dog had traced the suspect's scent.
When we suggested they bring the dog in to sniff us and see if the burglar was among the 12 people corralled in the bedroom, the officer went back downstairs, and took the dog away instead.

Two hours later, at around 04.00 hours, the police still guarding us suddenly suggested that if we supplied our identity, they would leave us in peace. When most of us refused, because legally we didn't have to, they stated that we were now under suspicion of 'abstracting' (thieving) electricity, and were therefore obliged to give our details or face arrest.

As someone who didn't live in the house, had never been there before, indeed didn't even know the names of the tenants, I still asserted I had no legal obligation to provide my ID, and wished to go home.
I was duly arrested and taken to Hollingbury Police Station.

There my identity and the fact I lived 50 kilometres from the squat was proved, but regardless, I was immediately locked up. I was refused my statutory right to make a phone call.
I believe I was imprisoned because they realised I was a photographer and probably in town to photograph the EDO protest rally, and therefore I should be prevented from publicising it.

Meantime the other tenants were kept in the upstairs room for a further six hours, until a representative from the electricity company came in the morning. Police remained on the premises for several hours thereafter.

Twelve hours later (when the EDO demo was finishing across town) I was finally released from Hollingbury cells without charge, after being interviewed about my so-called 'abstraction' of electricity (eg: "Did you plug in your mobile phone or charge your camera while you visited the squat?").
My Swiss Army Knife was confiscated as an 'offensive weapon'.

Beyond being prevented from photographing the EDO protest, I can see no other legal or logical reason for my having been detained for so long.