'Africa House' has been evicted and is now being demolished. Yesterday 27th June police raided the squat, home of about 100 people with and without papers, forcefully removing everyone. Another squat was opened, 'Global House', but evicted the same evening. People have been made homeless and destitute back on the streets of Calais... 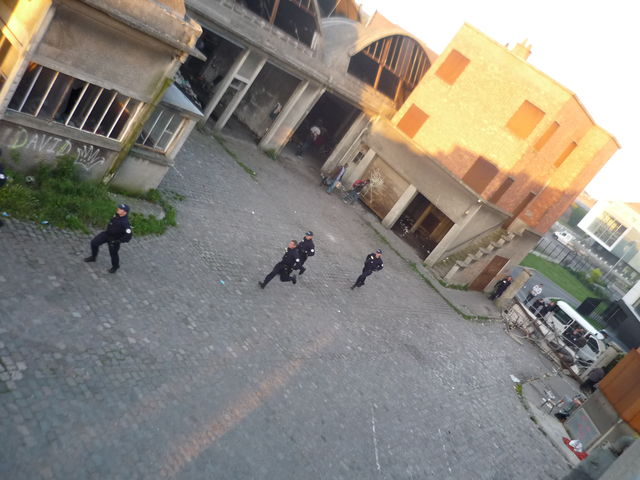 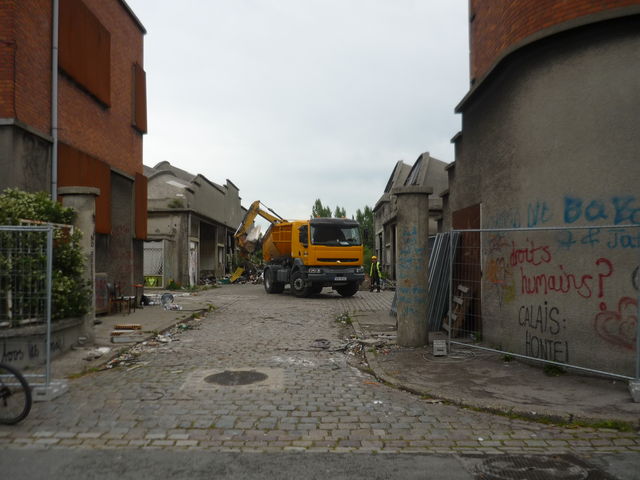 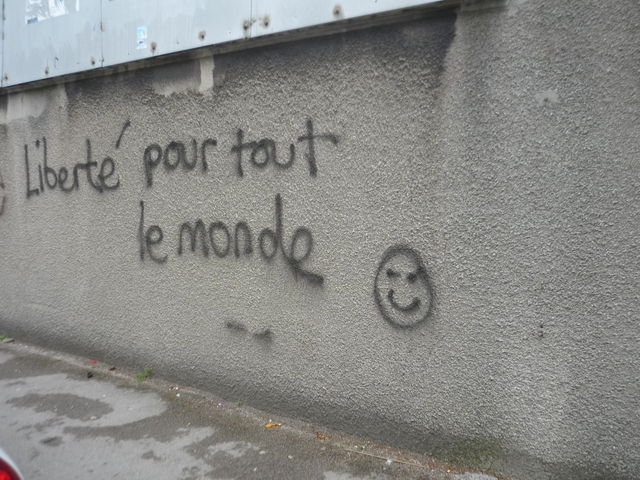 Yesterday at 6am four vans of PAF (Police Aux Frontières) officers, accompanied by city workers and plain clothes police, raided Africa House. They ran in, but to their surprise, most people (mainly those without papers) had already got away with all their belongings. About 30 people, (almost entirely people with papers), decided to stay in Africa House. The PAF immediately forcefully removed activists inside supporting people who chose to stay, also snatching their camera and throwing it into bushes outside. Then one by one the people living there were forced out the back of Africa House out of sight of journalists waiting at the front. One person was arrested.

As a result of being evicted from Africa House, the shelter of around 100 people, many people moved to ‘Global House’ a big empty factory 20 minutes walk away, only to be forced out on the street again that same evening. Private security ‘LSG’ surrounded the factory with dogs, accompanied on and off by Police Nationale and PAF, letting people leave but not re-enter. During the day most people went to Distribution to get food and water but found when they returned afterwards they could not get back into the squat or get their belongings. The security refused to allow food and drink inside, but activists managed to smuggle bits in. Later in the evening at around 9.30pm the private security finally evicted everyone. Those left inside managed to take everyone’s things with them but many people’s bags, clothes, blankets are not yet reunited with their owners.

Overnight people had to sleep dispersed in different places - outside under makeshift shelters, in the Jungle, in the parks, under bridges or in other more vulnerable abandoned buildings.

The eviction of Africa House was illegal under French law. No legal justification was given and the police refused to produce documents or to follow correct procedure. When evicting people in France they must be informed beforehand, notices placed in City Hall and on the building in question, and people are allowed to contest the decision (how to do this should be included in the notice). The police must show the judgement when making the eviction. None of these practices have been observed. Notices must be placed on the building and in city hall before demolition works, which there has been no sign of either, but machines have moved in and begun destroying the place.

Asylum seekers in France are entitled to accommodation. For months and years, many people have been ignored and denied this, which is why many have been living in Africa House. Recently three Sudanese men were accused of ‘illegal occupation’ of Africa House, but were found not guilty. Those with papers in Africa House were offered some accommodation when they were evicted but for how long or where was not made very clear to them, some were offered just 24 hours accommodation out of town. Some people had appointments regarding their cases or humanitarian aid in the next couple of days in Calais, and the accommodation they were offered was a long, expensive journey away, making it very difficult for them to actually take up even this meagre offer of help without it jeopardising other things.

Although the eviction for those with papers was illegal in many ways, for those without papers the law is even less help. Where it is legal to make people homeless, treat them like dirt and leave them destitute and subject to police violence, it is still completely morally wrong. No amount of law can make these things acceptable and the constant treatment of migrants in Calais is one of systematic and institutionalised abuse. Where it also contradicts law this shows just how acceptable and condoned by authorities this has become, and what disregard the people involved have for any form of restrictions. The more challenges that can be made against this the better, including in support of those who happen to fall out of the law’s protection. They are in no less need of aid, and often their situation is more desperate.

On the same day that private security was threatening homeless men and women with dogs and police (some of these just barked and looked ugly, the others were on leads, being dogs), and PAF patrolled the outside of the home of around 100 people to allow demolition machinery in, a meeting was being carried out in Paris. This was between France’s new ombudsman for Human Rights, and various associations and No Borders activists who were presenting the dossier compiled by CMS activists on police violence in Calais. A lot of interest was shown and the next step is for some of the officials to begin some enquiries.

If you want to come support the people now dispersed across Calais let us know. With many people sleeping outside, the more people on the ground here the better. Things we most need: tents, tarps, blankets and anything to make shelters are essential right now. Extra bikes and trailers, pots and pans would be super useful too.