Yesterday, Friday 4th January, witnessed a themed 'Punk as Fuck' Critical Mass on the streets of Birmingham. The mass went well from all accounts, but earlier on in the day West Midlands Police and the authorities of Birmingham Cathedral conspired to move the meeting place of the mass from the grounds of St. Philip's Cathedral to Victoria Square:

http://www.indymedia.org.uk/en/regions/birmingham/2013/01/505262.html?c=on#comments Birmingham Critical Mass has met regularly in the grounds of the Cathedral for over 15 years, approximately 7 of which have been accompanied by a small soundsystem. 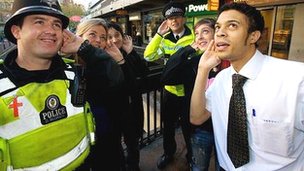 Clearly, they don't like our Punk as Fuck tunes!

Since then it has emerged that PC Dominic McGrath 2858 'masterminded' a strategy to cleanse young people from the Pallasades Shopping Centre Ramp by blaring classical music at them. PC Dominic McGrath is quoted as saying "Clearly, they don't like our choice of tunes".