UK-Savar Solidarity: a summary of protests against Primark

Various groups around the UK have staged protests against Primark and other clothing brands implicated in the collapse of the Rana Plaza factory in Savar, Bangladesh, in which more than 500 people are known to have died. 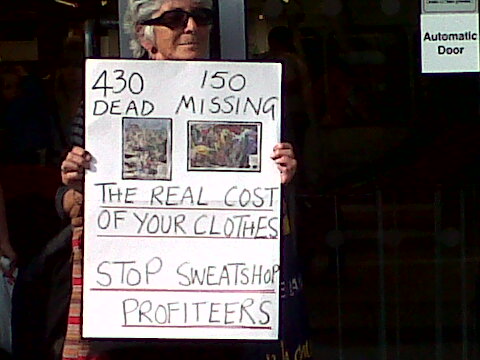 On International Workers' Day, activists from the Stop G8 Network held a series of loud and angry protests against Mango, Primark and Benetton stores in Oxford Street. Each of these companies is known to have sourced their clothes from the Rana Plaza factory. Protesters entered the shops and chanted about the continued exploitation of workers in Bangladesh and elsewhere. Many leaflets were handed to people in the heaving shopping district and there was considerable interest and support. Most shoppers were deterred from entering the shops due to the large number of police and protesters standing in front of the entrances. Protesters emphasised that the disaster in the Bangladeshi garment factory is just the latest incident in a series of such tragedies and that callous disregard for workers is part and parcel of global capitalism.

The 'Radical Bloc' of the May Day march descended on Primark, blocked entry to the store and distributed leaflets.

Stop G8 also picketed and leafleted outside a Primark store in Brighton.

*Other reports of protests in the UK*

War on Want organised a protest outside Primark on 27th April. Details here:

Workers' Liberty held a protest outside the Lewisham Primark store

For background on the causes of the collapse, see this article:

Please feel free to share with comrades in Bangladesh