100 Things We Need To Know This Year

Because We Live In a World of Conflict, Misinformation, Disinformation MONDAY LOVE part 7 boards the Good Ship with a party of Grass roots Heroes and Servants of freedom.

to Share with us 100 things we need to know this year. 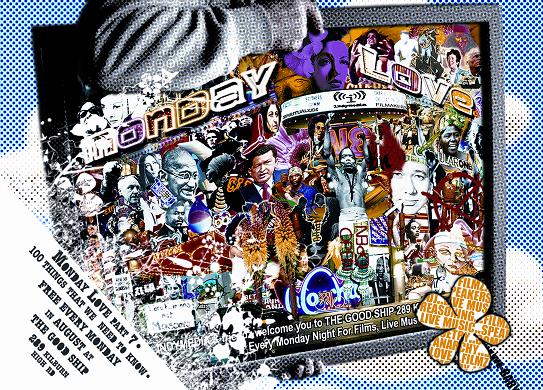 So join us every Monday for the month of August for our retun to Kilburn from our journeys (Idspiral camden lock,Parliament Sq with Brian Haw, A Squat in east london, Art centre in Peckham,1968 celebration with Time Out,Brighton Beach Picknick and some others we just cant talkabout :) Be ready for surprises, as we bring you interactive anarchy to raise your souls and blow your minds. The Good Ship, 289 Kilburn High Road Nearest stations are Kilburn High Road on Jubilee, Kilburn on Bakerloo, Brondesbury on Overground, and many many buses 7pm till 2am FREE ENTRY. Donations if the night inspires you.

Money makes the world go around

or so they say

Multi-media Anarchy with Monday Love on 11th august at The Good Ship, 289 Kilburn High Road, 7pm till 2am

http://www.myspace.com/excentraltempest
'An angel in disguise, Excentral Tempest is a William Blake-quoting, New Cross-based hip hop MC, and is something so special, she will will make you cry with joy'

http://www.myspace.com/sarahbearsounds
'Sunday Sounds, Reclaim Love, Sarah Bear brings Power To The Peaceful with a voice to melt your heart'

and much much more,

It is Free Entry, but donations will be warmly received to go towards the fight to keep SPIKE alive!

Monday Love welcomes you to our penultimate night at The Good Ship Kilburn, and
following on from last weeks exceptional Monday Love with Spike, we have
another astoundingly full night of music, films, live performance and '100
things we need to know this year'.

This week will be brought to you by the local Amnesty Internationl Kilburn
group, and then there will also be reports back from Climate Camp 2008, and
from the Free Gaza Boat, which is currently attempting to peacefully break the
Israeli blockade in Palestine.

Live performances will be supplied by Baraka, Joe Soul, Greg Abell (acoustic
singer/songwriter), Queen Hebullah, Brainchild, and very special guests 'The
Assembled Servants' will be attending to show the positive aspirations of young
people from local London estates through hip-hop poetry and on stage anarchy!

So come join us for our penultimate night of Monday Love at The Good Ship 289
Kilburn High Road, FREE entry all night from 7pm-2am, you won't be disappointed.

And if you missed the Spike night, what a shame, but look out for clips to be
soon uploaded, and upcoming bank holiday monday 25th is Monday Love Carnival
night.

Bringing our August season with The Good Ship Kilburn to a close, we find ourselves moored on a Bank Holiday and the sounds of Notting Hill Carnival just over the hill.

Join us for a latin flavoured Carnival Monday Love with Movimientos, Hands of Venezuala, and the big band sounds of Kaya, fresh from Carnival 2008.

Reasoning this week will come in the shape of:

Brad Will, Oaxaca
When Indymedia and independent reporter Brad Will was shot by mexican police while reporting on Oaxaca in 2007, his video camera fell from his hands. But it didn't stop recording. This extra-ordinary, moving and inspiring film shows the life of one young mans position in front line filmmaking, but also charts the movement of movements that he was a part of. From the squats of New York to the forests of Oregon, from the anti-globalization protests in Seattle, Prague, Quebec to the popular uprising in Oaxaca, Brad's camera paints us a picture of what his life was about, and what so many of his friends continue to struggle for.


Abajo el Colonialismo...Pachamama Libre!
This 30min documentary from Venezuala shows the demolition of the statue of Christopher Columbus in Plaza Venezuela, 2004. This small but historical event opened, with its simplicity, new pathways in the anti-colonial consciousness of the people, and also brought with it controversy that resulted in rich debate.


Live music from Kaya, special performance from The Assembled Servants (if you missed them last week, don't miss them again!), all the freshest old school and contemporary dancefloor Latin beats with Movimientos DJs, and lots of surprises too.

to Share with us 100 things we need to know this year.

All aboard Pirates, for Monday Love Carnival Special!

films start at 7pm, DJs till 2am