The two local protesters who covered a BP stand in fake blood during the 2002 CBI conference in Manchester's G-MEX appeared at the crown court last week charged with criminal damage of £5675. Their action addressed BP's greenwash as the company sought profit from catastrophe in the impending Iraq war and the Baku-Tblisi-Ceyhan pipelines project. 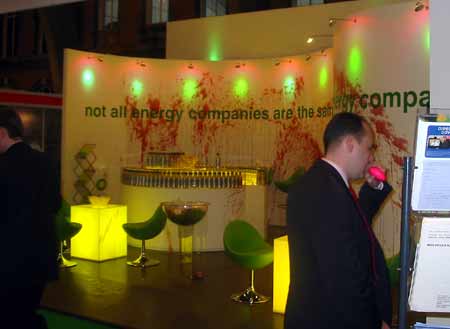 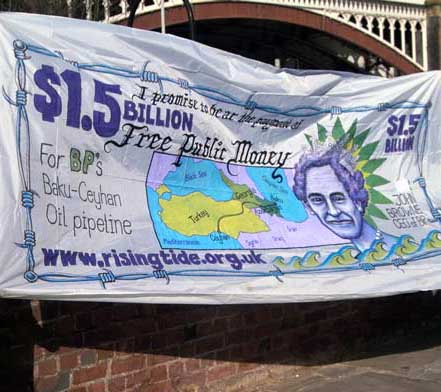 How to photograph Manchester without yuppie apartment developments.

At the start of the 4 day trial the judge ruled out their defence (lawful excuse in preventing a greater crime). With their argument, expert witnesses and evidence now inadmissable the pair continued to plead not guilty, representing themselves to use their summing up speaches to put BP on trial. The jury found them not guilty of 4 counts of damaging clothing but could not reach a unanimous verdict on the damage to the BP stand. Eventually the pair were found guilty of this charge, fined £300 between them, and given 2 year conditional discharges.

The G-MEX incident proved humiliating for security organisers, coming two days after protesters successfully stormed the building. CBI chief Digby Jones told the press that he would ensure the pair received maximum punishment. The conference had been besieged
by protests over corporate globalisation, equal pay for women, fire service pay and
the Iraq war.

Having survived evidence of horrific consequences for human rights, local communities, wildlife habitats and climate change the Baku-Tblisi-Ceyhan pipeline project finally hit serious difficulties in February - over the wrong kind of paint. Two House of Commons committees will soon investigate BP's failure to disclose crucial information as it sought to secure loans worth more than $1 billion. All of the pipeline already completed may have to be dug up and repainted at an estimated £500 million cost. (The Sunday Times, 15 Feb '04,

In related developments, the World Bank is under pressure not to bury the Extractive Industries Review (EIR) it initiated at the Prague 2000 World Bank Annual Meeting. The completed EIR embraces many of the concerns raised by environmental and community organizations. A leaked internal memo has revealed that the bank's management intend to dismiss the EIR and implement only its weakest recommendations. The UK governent has joined the industries concerned in lobbying against the EIR. (see