Today Manchester residents opposed to the introduction of biometric identity cards and the creation of a National Identity Register visited the Manchester offices of PA Consulting Group [1] and Siemens Business Services [2]. 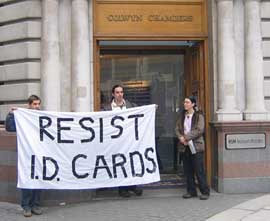 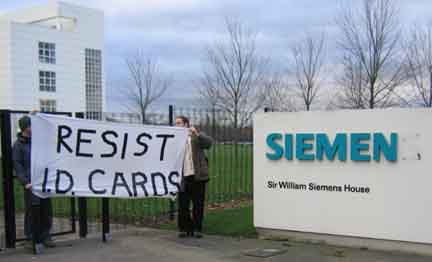 The residents are part of a network called Defy-ID, which is opposed in principle to the introduction of biometric identity cards and the creation of a National Identity Register (NIR). They believe that the scheme can only be stopped by direct action protest [3].

The representatives of Manchester Defy-ID visited PA Consulting Group and Siemens Business Services to draw attention to both the ID scheme and the companies that stand to make a massive profit from this gross infringement of our civil liberties [4]. PA Consulting are certainly worried about the possibility of protests, as they had hired a security guard especially for this day.

The residents stressed that this was just the beginning and called on all those opposed to the ID scheme to prepare to take direct action to stop the ID scheme.

Manchester resident Cassie Jones (32) said: “The identity card and the National Identity Register will fundamentally alter the relationship between the individual and the state. We will soon all be under constant surveillance. We will be unable to access even basic
services such as healthcare and education, unable to drive and unable to travel abroad unless we consent to this monitoring of our day-to-day lives.”

Manchester Defy-ID representative Tim Stockton said: “The only way we’ll be able to stop this vile scheme is if ordinary people have the courage to stand up to the government and these companies and say enough is enough. Everyone has something that they want kept private, and this scheme is going to expose all our day to day activities to
surveillance – not just by the state but by private companies too. We will have to resist this scheme when it becomes law and that not only includes refusing to register or carry a card, but includes targeting the companies who will make millions from the government spending taxpayers money on something we don’t want.”


[1] PA Consulting Group was awarded a development contract said to be
worth £10 million over 18 months in May 2004. The company was also used by the Government in setting up the Criminal Records Bureau, whose chaotic beginnings led to serious criticism.
[2] Siemens Business Services is one of the companies who are preparing to bid for the ID card contract.
[3] The scheme is being rushed through parliament with the support of the Conservative party and could be law before the next general election. There are already more than 80 people working on the identity card scheme. This includes 40 consultants from PA Consulting Group, the government's private sector "development partner".
[4] Around £9 million has already been spent on the early stages of the project, according to Charles Clarke, the Home Secretary. In total the ID scheme is expected to cost £5 billion or more to develop. The government will be spending money on this scheme for years and years to come. The companies that win the lucrative contracts to supply the goods and services necessary to the scheme stand to make hundreds of millions of pounds in profit.