Chris Eubank And His Protest Against the IIlegal Wars

Chris Eubank harrassed and then arrested by Police 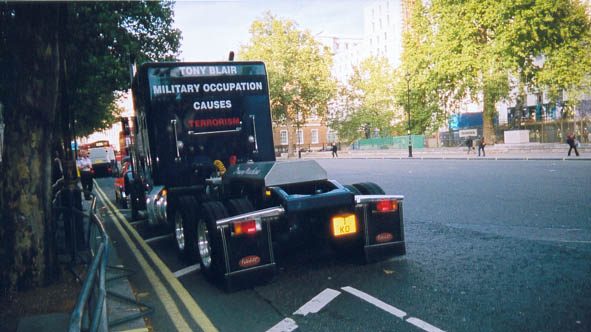 On Tuesday, 14th October 2003 at around 4.30 pm, I found myself caught up in a car chase in the heart of Westminster, London. I could hardly believe what I was witnessing and boy, how lucky I was to have my not so snazzy camera with me.
Still, the pictures came out and I'm most grateful for that.

Actually, when I mentioned above being caught up in the middle of a car chase, I actually meant a car, and later cars chasing a truck. The cars belonged to the police and the US style truck was of the flamboyant celebrity star and ex-professional world champion middle weight boxer, Chris Eubank.

I walked by Big Ben and going towards Parliament Square when this horning grabbed my attention. I look around and noticed Chris Eubank's unmistakeable truck. Chris was horning to grab peoples' attention towards his message. The back of the truck carried the words, “TONY BLAIR MILITARY OCCUPATION CAUSES TERRORISM”.

At first, they followed him silently, obviously trying to see what he was up to and as soon as Chris turned towards Parliament Street, they feared the worst for their beloved, mass murderer, Tony Blair. All hell broke loose with these police. All of a sudden, with sirens blazing, they started chasing Chris and his truck that contained the message, “TONY BLAIR MILITARY OCCUPATION CAUSES TERRORISM”.

It was obvious to any bystander that Chris hadn't done anything wrong. All he was doing was protesting against Tony Blair and the illegal wars he continues to wage.
Chris, the determined man on a mission, ignored the police who, in my opinion were trying to illegally detain him. He continued driving and horning and even managed to complete another lap of his circuit before the police barracaded him in. I rushed over to Whitehall and a little beyond the turning into Downing Street where Chris's vehicle had come to rest. There the police warned Chris of his behaviour and asked he to go away. At this point Chris put up his fists and asked to be arrested. The police, as dumb as they are, decided not to arrest him. Well, how could they? Chris had done nothing wrong!!! So, they let him go.

Before saying hi to his adoring fans and posing for a couple of photos, the police forced him to leave the area. Why? Was Blair afraid that his life was in danger??
Chris entered his vehicle, and then came his stroke of genius! Instead of moving forward, he decided to reverse into Downing Street. It was so hilariously funny to see the faces of the police down on the ground. They put up the emergency barriers at the speed of light. Were they afraid their beloved mass murderer Blair would be assassinated? It just so happens that Chris was in a middle of a 3 point-turn. Chris turned his truck around before heading back down towards Parliament Street. And hey guess what??? Good old Chris was back to his usual tricks of doing the circuit much to the bemusement of the police. I can imagine Tony Blair ripping his hair out at this stage!!

The police followed Chris again and again they did so with sirens blazing. But why? I don't understand. What law had Chris broken? I guess, he, like I, am guilty of breaking the law... the law of not supporting the mass murderer Tony Blair!! The last I saw before his arrest was when he turned into Trafalgar Square. I couldn't see for
certain, but I guess the police had now begun to escort him out of town. I waited around for 10 minutes before heading off to St. James's. I had hurt my foot in all the chaos that ensued and wanted a brief respite before heading off to the meeting in Milbank. Ten minutes into my little rest, I heard Chris's horn again!!! “Excellent!”,
I thought and hobbled off up to King Charles Street and turning towards Trafalgar Square way.

In the distance, I saw Chris being handcuffed away. He was being led into the back of a police van and the London Tonight news crew following him. I ran as best I could to get my exclusive photos, but by the time I got there Chris had been taken away.

However, I have managed to get the picture of his truck. What I hear happened was the police stopped Chris again and again refused to charge him. Again, he reversed into Downing Street, but unfortunately, some blind driver not seeing Chris's truck drove into him as he tried to enter Downing Street. This is when the police took their opportunity and arrested Chris Eubank for what I assume to be dangerous driving, although it wasn't dangerous at all.

After Chris's arrest, the police took turns to inspect Chris's vehicle. I ask what were they looking for? Is Chris Eubank now some sort of “terrorist”??? No, of course not!!
The only terrorist this side of the Atlantic is Blair!!!