And photos from today's invasion and occupation of Leeds.
This week, Iraq is being handed back to the Iraqi people (ha ha ha ha!). CIRCA begs to differ….

This so called HAND-OVER of power has amused us greatly. We have rolled around on the floor in fits of laughter at such an absurdity. We at CIRCA have sent out our very own inspection teams and listened with concern to the Clown's Intelligence Committee.

We are suspicious that all is not as it seems in Iraq. Our own dossier (not sexed up, but slightly fruity), reveals that:

· Out of $18 billion allotted (what a lot of money!) by the US Congress for reconstruction, only $3 billion has been spent.

· Our clown friend Naomi Klein in the Guardian (26/6/04) told us that out of every £ spent by those rebuilding Iraq, 25p is spent protecting them from attack, 30p spent on insuring them against death, and 20p is lost to corruption. We at CIRCA are alarmed to find out that only 25p in every £ is left for rebuilding Iraq - most of which the poorest never see. Most of the money ends up in the pockets of Western Multi Nationals

· The Iraq Interim Government is prohibited from reversing any of the laws passed by the USA since it has occupied Iraq.

CIRCA feels it has no option but to establish the Clown Provisional Authority in Leeds. Our action is a last resort. We have no quarrel with the people of Leeds. Our purpose is to ridicule, mock, tease and undermine the rich and powerful war profiteers.

We are committed to the re-construction of a world of justice, joy and jelly-babies and call on fellow motley rebels, clandestine clowns and bumbling buffoons to join us to fulfil our promise to the people.

The Clandestine Insurgent Rebel Clown Army (CIRCA) announces its occupation of Leeds and the establishment of the Clown Provisional Authority. The occupation is in response to the failure of the local authorities to rid Leeds of the presence of forces believed to be connected to war, militarism and state terrorism.

CIRCA will establish a Clown Provisional Authority that will bring foolishness, love and custard pies to the people of Leeds.

By the end of today CIRCA will have visited:

The war profiteers - It has come to our attention that Chubb, a firm based in Leeds has recently been bought by US owned United Technologies Corp (UTC), makers of military equipment like Sikorsky helicopters, which have been used in bombing raids on Iraq. We intend to convert such companies, who make money out of the war, into bicycle, feather duster and doughnut factories.


The dictatorship of fools - It has come to our attention that a particularly career minded Government cabinet minister, by the name of Mr Benn, works in our midst. By the end of the day, CIRCA resolves to offer said politician the position of Minister for International Clowning Development. Any further signs of careerism or profiteering from government representatives will result in custard pie interrogation and severe tickling.


The occupying forces - It has come to our attention that the occupying forces are recruiting in Leeds. Potential recruits have shown great skill and courage in their desire to end tyrannical rule in Iraq. CIRCA believes there is great promise in these young recruits. By the end of today we resolve to recruit them to the Clandestine Insurgent Rebel Clown Army and offer training in mocking, teasing and ridiculing the rich and powerful warmongers, rather than bombing, plundering and invading the people of Iraq. 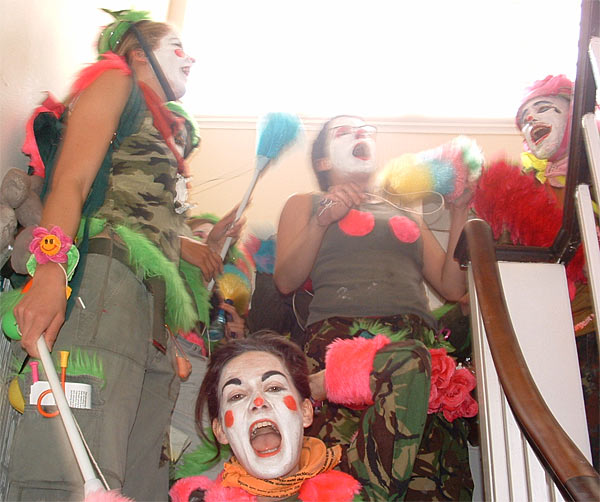 Inside the Labour Party HQ 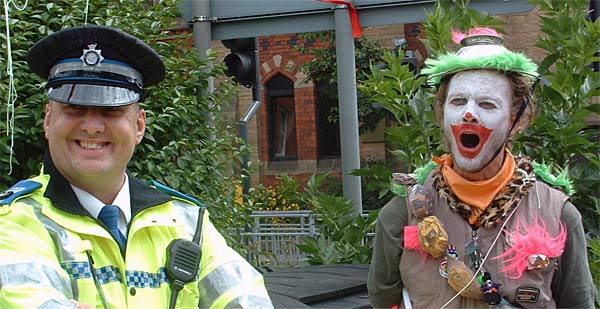 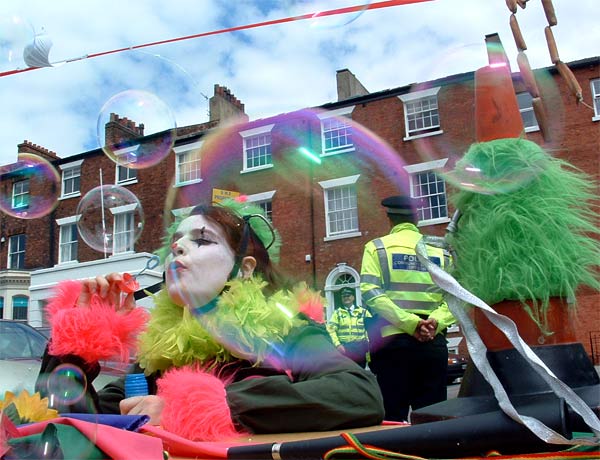 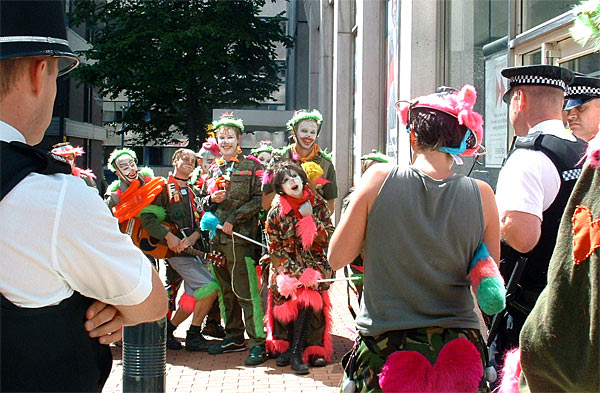 Heading towards the Army Recruitment Centre

The first pics are from the Labour Party HQ and office of Hilary Benn.

Hey CIRCA.Have to say how colourful and cool you all appeared to be on the photos from the protest. Well done for all the time and trouble you went to. Speaking of trouble...One of the photos mentions you were off to the Army Recruitment Centre! Forgive me, but the Army is NOT funny, nor is it even a laugh(it costs' peoples lives and masses of money diverted from real good causes). I suppose, if colourful clowns, having fun, communicating and sharing experiences, food, love and peace and the like were to BE the Army, then, I suppose, Army could be fun.
Well done CIRCA, whatever it is you "done".
Regards, best and love and Peace(get a lot for your money with THIS clown!)
Smiley Steve.