Is the Nazi BPP About To Split Or collapse Completely?

As they struggle from farce to farce is the Nazi 'British People's Party' finished? 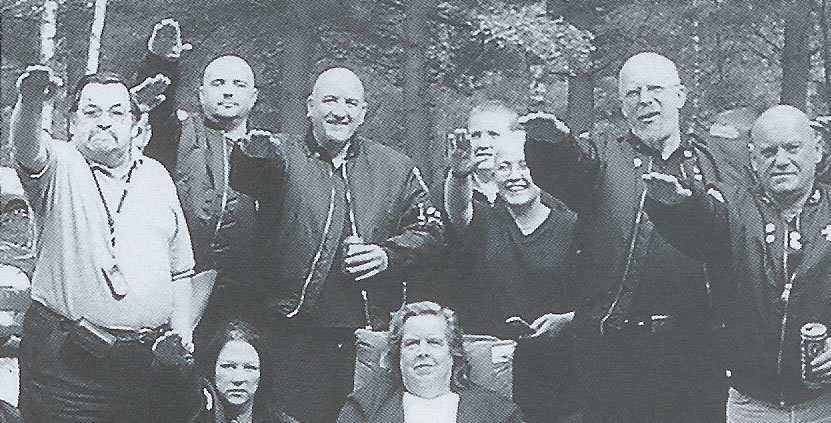 Since it’s inauspicious start last year, when it split from the three month old ‘Nationalist Alliance’, the so-called ‘British People’s Party’ has had problems. A direct descendent of the ‘White Nationalist Party’, the Leeds-based outfit was originally led by septuagenarian Nazi John ‘Griff’ Wood, together with alcoholic police-informer Eddy Morrison, another veteran Nazi, Kevin Watmough, and relative newcomer, Peter ‘Sid’ Williamson, from Saltdean near Brighton. The ink was barely dry on the BPP membership cards however, when the Hitlerite sect was in trouble, with a falling-out between the leadership. Amid accusations of ‘sexual misconduct’ and mental instability, Wood was ousted as party leader by his 3 former comrades. While Morrison, who has split virtually every fascist outfit he has ever been involved with, became the BPP’s new ‘National Organiser’, it was denied that he had been behind Wood’s sacking personally, with Sid Williamson affecting responsibility.

Since Wood’s departure late last year, things between the BPP’s new leadership and himself could be characterised as ‘vicious’ to say the least. Wood was accused of being a ‘paedophile’, ‘pervert’, of being ‘a Jew’, a ‘meglomanaiac’, an informer for the magazine ‘Searchlight’, and of conspiring with the BPP’s former Bedford organiser Chantrelle Hall, who was sacked at the same time as Wood.

For his part, Wood initially threatened legal action against the BPP for deposing him as leader, and claimed that since he alone was registered with the Electoral Commission the BPP could not stand candidates without him. Since the UK section of the fascist Vanguard News Network (VNN) is controlled by Williamson, both Wood and Hall were denied the ability to reply to the allegations being made against them. Clearly frustrated, Wood has even resorted to posting on Indymedia to slag off his former comrades, who he has accused of being ‘drunks’ and ‘perverts’, as well as leeching off him and the BPP financially. Morrison in particular is accused of financial impropriety, a charge he is no stranger to within fascist circles.

With Wood gone, Morrison began to court former-BNP fundraiser Mark Cotterill, currently running his own tiny ‘England First Party’, with the aim of bringing him into the BPP leadership in January (Wood had previously insisted that Cotterill could ‘”never” join the BPP.) While attending several BPP functions however, and being photographed with a grinning Morrison for the BPP website, Cotterill appears to have got cold feet. Hardly surprising since the BPP have struggled from disaster to disaster, and have never been far from bankruptcy.

Morrison, a veteran alcoholic, is back on the drink and his behaviour has become increasingly bizarre as he appears to be losing his mental faculties altogether. The articles, such as they are, on the BPP’s website have got more and more ridiculous. Importantly, the BPP, while attracting a few ageing Nazis who had previously been in the WNP, have failed to make any real impact on the British far-right, and recruitment has been poor.

At the beginning of this year, the BPP got a nasty surprise when a sizeable contingent of antifascists, led by the West Yorkshire ‘635 Group’ (Antifa) picketed their Leeds accommodation address. The bluster on the BPP’s site about this action turned out to be very ill-advised since a few days later the company responsible, Mailboxes Etc, terminated their contract with the BPP. Morrison reacted even more ludicrously, issuing a statement worthy of the Nazi u-boat captain in ‘Dad’s Army’, saying that when the BPP seized power all their enemies would pay for their treachery! So hasty was Morrison to begin issuing threats, that he foolishly reproduced the letter the BPP received from MBE, complete with Kevin Watmough’s home address. There were also accusations, by Watmough, that MBE employees had been stealing the BPP mail and giving it to the 635 Group, and there were the usual fascist threats against the company and it’s employees.

Earlier, Morrison had announced that he intended to stand for election in the Leeds Bramley-Stanningley ward, where both he and Watmough live. According to BPP propaganda they expected a lot of support in the area they have attempted to make unsafe for any non-white person. Within days of the closure of the BPP’s mailbox however, a large Antifa contingent went into Bramley to leaflet and ‘clean up’ the BPP propaganda supposedly littering the area. There appears to have been little or no evidence of BPP stickers and posters though, and local people claimed not to have heard of the BPP. To add to the fascists’ humiliation, the Antifa group leafleted Watmough’s own house and plastered it with their stickers.

The same weekend, Morrison claims to have been attacked and hospitalised by antifascists, at the re-direction point to what had first been announced as a BPP ‘rally’, and ended up a rather squalid little meeting, the date for which kept being changed. It says a lot about the BPP, that Morrison, the party’s leader was doing the re-direction himself, and his account of the supposed attack is obvious nonsense. Nonetheless, whether Morrison was beaten by members of the 635 Group, as he claims, or whether he simply fell over while drunk, he did end up in need of medical attention for a head wound and other injuries. While Watmough apparently played Florence Nightingale to his fallen leader through the night, and close friends sent sympathy messages, not everyone on the Nazi right was supportive. There were even allegations that Morrison had fallen victim to an attack by other fascists.

With Morrison saying that he was “taking a rest”, the BPP was left in the hands of even bigger idiots. Not that Morrison could stay away entirely as the increasingly laughable output on the BPP website shows. Williamson, a loud-mouthed ‘internet warrior’, who has previously been cautioned by the police for his online ravings, and who has neither the sense nor discretion of a drunken dinosaur, was frothing at the mouth on VNN, posting all sorts of threats and nonsense. Watmough, clearly frightened, has gone into virtual seclusion, apart from his own internet ‘activism’, even palling up Leeds police-informer, Tony White. The response of these Nazi warriors to the supposed attack on their leaders was to call for Antifa to be “banned”! A call they have also made with regard to Indymedia.

Since their inception, there has been a dichotomy central to the BPP. This is a hardline Hitlerite party, recruiting on that basis, but trying to convince the Electoral Commission that they are respectable and democratic. Since the natural constituency of the BPP is the dregs of the Nazi right, it was inevitably only a matter of time before one of their uncomprehending foot-soldiers cocked things up (not that Sid Williamson has been exactly ‘playing the game’.) BPP followers in Manchester recently issued a leaflet opposing a local “Jew School”, which naturally upset many local people, and arguably contravenes the race laws The BPP were in hot water, and despite some pitiful ‘official’ statements they may well still be. Pathetically, on the BPP website, they accused antifascists of ‘upsetting Manchester’s Jewish community’ by producing the leaflets! Even more incredibly, both Morrison and Watmough gave grovelling interviews to the Jewish Telegraph, in which the two veteran anti-Semites claimed they were not ‘anti-Jewish’ (see separate thread on Indymedia – ‘Anti-Semitism Is Central To The BPP’s Creed’.)

In the hardline Nazi circles in which both Morrison and Watmough dog-paddle, it was inevitable that their grovelling statements, insincere as they undoubtedly were would be regarded as the lowest form of treachery. Unfortunately for whingeing Nazis though, since the BPP control virtually all the Hitlerite fascist sites, they did not have too many ‘rights of reply’ open. But, Sid Williamson, could be counted upon to be stupid as ever, posting on VNN that he himself was indeed “anti-Jew”.

Clearly things are sicker than ever in the BPP camp; Watmough, already running scared from Antifa, and now put in his place by the Loyalist UVF for issuing cyber-threats on behalf of the BPP’s supposed “friends in Ulster” (see ‘Belfast Loyalists Issue Statement On Fascist Groups’ on Indymedia) has been ‘sucking up to The Jew’; Morrison, drinking and poorly in his Bramley tower-block, has done the same; Williamson, safe in Saltdean, feels he is the superior Nazi. Cue the unlikely reappearance on VNN of John Wood, previously banned from posting by his former pupil Williamson, and last seen approaching the BNP (shortly after previously announcing he’d hung up his jackboots.) Morrison and Watmough meanwhile are nowhere to be seen.

Wood, ever the hardline Jew-hater, is making placatory noises to Williamson, someone who has slagged him mercilessly for months, but who he probably hates less than Morrison, and who is undoubtedly more stupid and malleable (and can be bought just as cheaply.) So what happens next, will the ageing Nazi Wood swallow what little dignity he ever had and form a new alliance with the man known as ‘The Saltdean Beast’? Is ‘Unsteady Eddy’ finished? Can ‘Kev The Kike’ maintain any form of respect with the young ‘Blood & Honour’ skins he sells swastikas to? Will the BPP split, or just throw in the towel. As ever, the BPP have antifascists everywhere laughing their bollocks off.