Come and join the protest against the exploitation of asylum seekers by Angel Group. Outside Angel Group Offices, 149 Harehills Road, opposite Dock Green Pub near St. James Hospital.
The Angel Group is one of the largest providers of housing for asylum seekers
and they make vast profits from doing so. Angel group, however, fail to live up
to their name. We have seen asylum seekers housed in damp houses, where the
toilet has flushed into the kitchens, women and children having to sleep on old
mattresses thrown on the floor, with no heating or hot water, houses with
leaking roofs, broken windows and broken floorboards. We have testimonies of
people talking about gas leaks not being repaired, of intimidation by the
staff, of theft of property and illegal searches.
Many people would like to speak out about the treatment they receive by Angel
Group but have been intimidated by the staff, or feel too vulnerable to risk
voicing their opinions.

Join our demonstration and call for an end to the exploitation of asylum
seekers.

‘In my country we wouldn’t house an animal in this place’.

There are many ways in which asylum seekers are exploited in the UK, one of the clearest examples is the profiteering by private housing providers such as Angel Group.

NASS - the National Asylum Support Service, was set up in 2000 following the government's decision in 1999 to disperse asylum seekers out of the south-east to the rest of the country. The main aim of NASS was to provide accommodation for asylum seekers while their claims and appeals were being considered. Instead of creating a socially responsible housing programme, they offered contracts to anyone who could deliver. A number of private companies were set up and, driven by the profit motive rather than welfare concerns, became nothing better than government sponsored slum landlords.
The Angel Group, solely owned by Julia Davey, was one of a dozen private companies contracted to supply properties. With a contract worth £20 million Angel group bought up property in some of the most deprived, and cheapest, areas in the country.
In their first five years the Angel Group became a multi million pound property company, reporting more than £5 million profits in their first year of trading. By 2003, according to their own company report, profits had risen steeply to £40m. Julia Davey paid herself a salary of £458,000 as well as collecting nearly £1m in dividends. All from housing asylum seekers. All from the Tax Payers purse. She now has houses in the UK and Florida. In 2004 the Estate Gazette's rich list placed her at number 15 out of the 20 wealthiest women in property. In 2005 an on-line business website - realbusiness.co.uk - put her at number 17 in its list of 50 top businesswomen. Now based in prestigious building in Docklands in London the group, with more than 50 subsidiaries, is still 100% owned by Ms Davey. The Angel Group not only house refugees but they also play a pivotal role in the inhumane dispersal of refugees across this country. Their dispersal appears to be dependent upon the cheapest accommodation deals The Angel Group can exploit in Britain.
The financial details of The Angel Groups dealings with NASS are secret - gagged by the Official Secrets Act. From The House Of Commons Hansard Written Answers 30th April 2001 (pt25)
'Mr. Mitchell: To ask the Secretary of State for the Home Department what payments per capita are made to private sector accommodation agents for each asylum seeker dispersed from the south-east; and if these payments vary by region.
Mrs. Roche: I am afraid that I am unable to give this information since it is commercial in confidence.'
At its busiest, in 2005 the Angel Group was providing more than 3,600 bed spaces to NASS. The fee paid for each bed space was £102 a week (or £19million/year). (The Guardian)
In spite of NASS imposing strict guidelines on the quality of housing the service providers have proved over the years to be nothing more than latter day Rackmans. Almost inevitably the pursuit of profit has led to poor housing. A number of the original Service Providers have lost their contracts, but in spite of numerous complaints NASS receives about them, The Angel Group continue to be awarded a bigger and bigger slice of the cake.
According to their website, ‘the Angel Group’s diverse portfolio includes residential housing schemes, retail-related investment projects, commercial offices, hotels, training centres and leisure developments’. Surprisingly asylum seekers don’t get a mention anywhere on the website. Julia Davey doesn’t like publicity and is elusive. Her staff have talked about her greed and bullying tactics. Her company has been accused of fraudulently claiming money and deliberately misleading NASS, and subletting property illegally. Company records, internal emails and testimony from former Angel employees also suggest the company was paid for accommodation that was unfit for habitation or for which it had no keys. Staff are accused of intimidating asylum seekers, sexual harassment, theft and illegal searches of asylum seekers personal belongings.
The company also has an appalling track record of failing to meet the statement of requirements set out by NASS for its housing providers. Asylum Seekers are constantly reporting leaking roofs, broken windows, gas leaks, lack of facilities and unhealthy environments. The houses are often refurbished by Angel, but with poor workmanship and almost non-existent maintenance the accommodation frequently falls below the standards set by NASS.
In spite of all the investigations and bad publicity, and accusations of mismanagement, the Angel Group has continued to grow. Julia Davey has used the millions she makes from the NASS contracts to finance a property development company that is now building luxury apartments in exclusive areas of London and Europe.

‘I sleep under a bridge in the town centre rather than stay in this house.’

An investigation by a local newspaper in Sheffield uncovered “squalid conditions” and sometimes no gas or electricity. A report by the National Audit Office in 2004 of asylum seeker housing provided by private companies (including the Angel Group) showed that 33% of 4,535 properties inspected had "significant" defects and 7% needed immediate action. On 2/08/04 The Yorkshire Evening Post reported that the 'The Angel Group' were investigated by the Home Office because they housed Refugees in 'squalid conditions...without gas or electricity'.

On 3/8/04 the Yorkshire Evening Post reported that there were also reports of The Angel Group evicting refugees and sub-contracting landlords who have appalling track records with refugees. Sub-letting sub-standard accommodation like this to refugees is a very lucrative business.
On 3/08/05 The Guardian reported that The Home Office was investigating allegations of financial irregularities by the Angel Group which earns millions of pounds annually through government contracts for housing asylum seekers around the country.

In 2002 the company bought the Centrex Centre in High Ercall for £2.5 million. This purchase was sufficiently dodgy to prompt a debate in Westminster that raised concerns about the Angel Group, brought to the attention of the Chamber by Peter Bradley, M.P. for the Wrekin. "I share my hon. Friend's concerns about the apparent relationship between the Angel Group and the Home Office in relation to Wakefield prison. I attended the meeting to which he refers and well recall the comment of a Home Office official when he raised his own concerns about that relationship. The official said that the Angel Group seemed to have an inside track - that was the expression he used - and seemed to be able to anticipate the decisions that were being made at official policy level by the Home Office before anyone else seemed to know about them. That is a very serious allegation coming from any source, but it is yet more serious coming from a civil servant."
The Angel Group hit new depths in July 2004. An Iraqi Kurdish resident of one of its properties in Burngreave, went on hunger strike to protest that his forced deportation to Iraq would lead to his death there. He was in the fourth week of his hunger strike when Angel Group representatives announced that they wanted him out of the house. His few clothes and vital official papers of his were taken without his knowledge by Angel Group employees in an attempt to force him out.
Complaints of appalling housing conditions and abusive behaviour of staff continue to mount, yet Angel Group seem to carry on with impunity.
Many people would like to speak out about the treatment they receive by The Angel Group but have been intimidated by the staff, or feel too vulnerable to risk voicing their opinions. 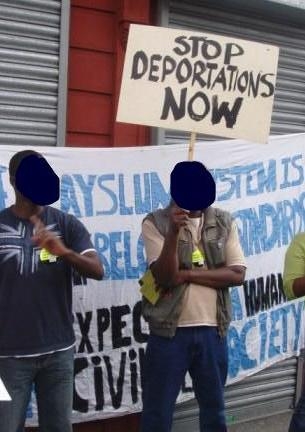 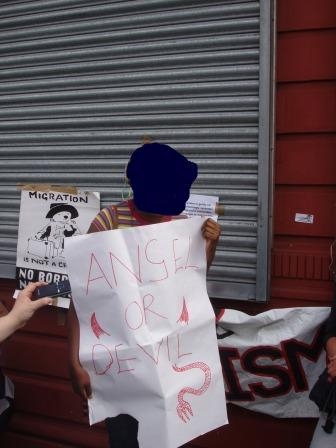 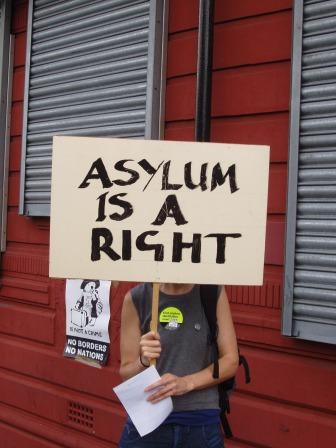 Asylum is a Right 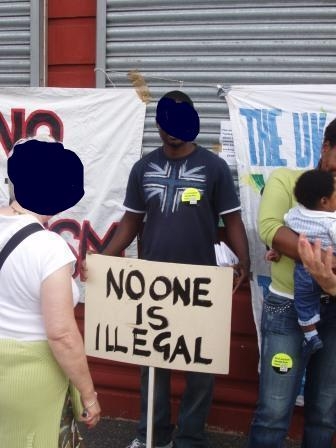 No One is Illegal 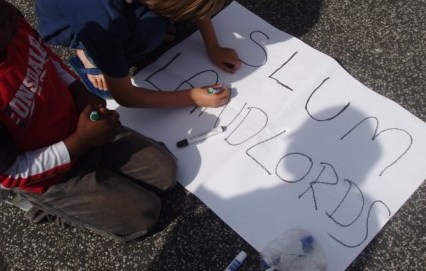 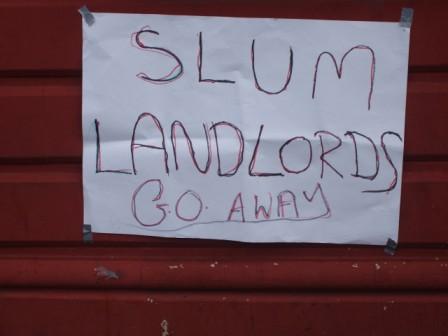 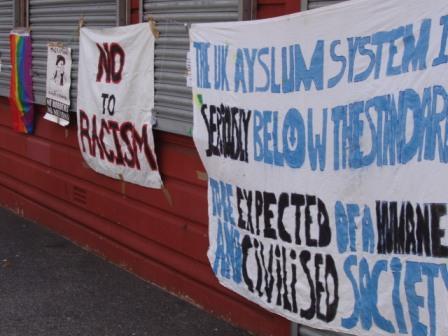 Angel Group evicted for the day

30 people gathered outside Angel Group in Leeds last Friday to call for an end to the slum landlord's exploitation of asylum seekers. Angel group, however, decided not to face their critics.Their management took the brave decision of closing down the office for the day and all those who normally receive their NASS vouchers at the office had them hand delivered to their houses. If the management at Angel Group had not gone into hiding they would have heard a number of testimonies from those unlucky enough to be living or have lived in Angel Group houses. Speakers talked of the humiliating conditions they are forced to live in and the problems they face if they speak out or complain.