From issue 2 of ‘No Pasaran!’ the Antifa England newsletter, which can be downloaded as a ready-to-print PDF file from the Antifa website. 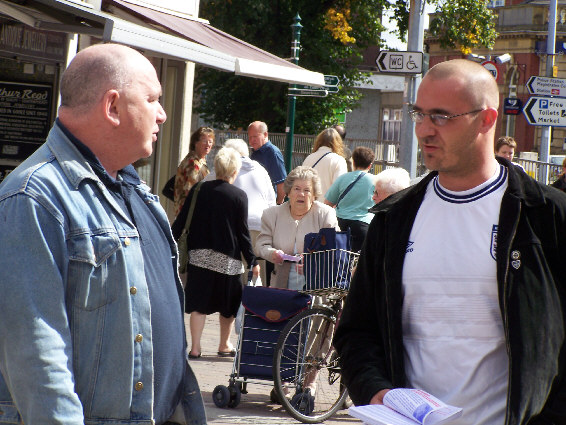 Gilleard with Eddy Morrison on a BPP 'activity' 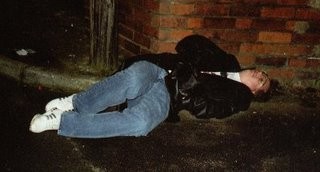 In June, Martyn Gilleard, erstwhile Goole organizer for the so-called ‘British Peoples Party’, was jailed for the possession of homemade nail-bombs and plans to blow up mosques. Gilleard also pleaded guilty to possessing nearly forty thousand images of children and babies being sexually abused and tortured.

While the BPP were initially more than happy to have a would-be terrorist (and potential martyr) on their hands, reality bit home with Gilleard’s conviction. Despite (supposed) party leader Kevin Watmough repeatedly inciting idiots like Gilleard on his various pseudo-terrorist websites, and girlfriend Kate McDermody spouting off about “Racial Holy War”, the BPP publicly made a cowardly U-turn following Gilleard’s conviction, stating: “The BPP is a legally registered, law abiding party and our path to power is through legal demonstrations, meetings, magazines, printed propaganda and elections.” Now that sort of talk won’t sell many swastika badges will it Kev?

It was however, the publicity surrounding Gilleard’s paedophile conviction that really had the BPP worried, with them claiming that they had not known about these charges. Yet Gilleard’s house had been raided in relation to his paedophile activities, not his neo-Nazi ones, and he was not the only person arrested. From the very moment of his arrest, it was obvious to anyone who took any interest in the case that there was a paedophile connection, indeed the story was outed on ‘Indymedia’. It is simply inconceivable that Kevin Watmough and Kate McDermody, who had “supported him emotionally and financially for six months” did not know Gilleard was a paedophile. After they denied as much, other neo-Nazis came forward to contest the claim.

The ‘Racial Volunteer Force’, with whom the BPP are currently pals, claimed they had rejected him sometime before (though there is some evidence to the contrary), while ‘Ulster C18’ told the BPP they should “hang their heads in shame” for protecting Gilleard. In a damage limitation exercise, Watmough added Gilleard to the ’Noncewatch’ section of his ’Redwatch’ site. Quoting himself in third person, Watmough cravenly (and dishonestly) stated: “Gilleard was indeed a member of the party but as the BPP are an organisation anyone can join by filling in an application form and sending it to the party address, with the required subscription fee enclosed, they have no way of screening applicants.” But Gilleard was the BPP’s Goole Organizer, someone the party leadership knew personally and had sworn to stand by whether he was convicted or not. At the time of Gilleard’s arrest, they had called him “a trusted comrade and loyal member”, he was not someone who had simply filled in a coupon.

The simple fact is that nonces and neo-Nazis go together like beer and pint glasses, the whole of the far Right is riven with this kind of scum. John Wood, founder member of the BPP and their first leader was a well-known sexual predator, Watmough has been accused of rape on several occasions, and Sid Williamson, another founder member and until recently, National Organiser, has been accused of both rape and paedophile activities.

The BPP are currently supporting another paedophile, Simon Sheppard. In his autobiography, Sheppard boasts, among other things, about an abusive relationship with a 13 year-old girl. Together, with fellow anti-Semite Steve Whittle, Sheppard is currently locked up in California after fleeing there following his conviction on race-hate charges at Leeds crown court. The convictions were significant because they appear to close a loophole by which British fascists have been free to openly flout the British race laws because their websites are hosted abroad.

The most laughable thing about Whittle’s predicament is that he probably wouldn’t even have got a custodial sentence here, had not Sheppard talked him into a ludicrous plan to claim political asylum in the US. We note that ‘Teflon Kev’ Watmough has still had no real police interest in the neo-Nazi sites he runs, including ‘Redwatch’ and the ‘Combat 18 Guestbook’ (on which Gilleard regularly posted.)

While Gilleard, now bizarrely claiming to be a Muslim, languishes in the British high security estate, and Sheppard and Whittle await extradition, the BPP has been having something of a ‘Night of the Long Knives’, with plenty to keep us laughing out loud as Klondike Kate McDermody stages a coup for leadership. First to go (apparently - see page 6) was Sid Williamson along with former Brighton BNP organizer (and yet another drunken lush) Jill Jerome.

Next up was another founder member and on-off BPP leader Eddy Morrison, who was supposedly ousted for complaining about having his expenses claims turned down by McDermody, who is party treasurer. Morrison has used the BPP and his numerous other fascist parties as a personal (s)lush-fund for years, but the reason for his culling probably has more to do with complaints about McDermody’s influence over Watmough, who is still supposedly BPP leader, and a piece which he attempted to publish in Nationalist Week taking the piss out of the pair of them. Morrison was clearly flapping following the Gilleard conviction, and then those of Shepperd and Whittle, but he claims he did not resign. According to Morrison, after sending his long-time pal, Watmough a complaint by e-mail, he received a note thanking him for his resignation! McDermody has gone on to publicly call Morrison “a coward, drunk, traitor, and parasite.” And a lot more besides. Say what you like about these Nazis, they don’t mind washing their grubby linen in public!

Shortly after Morrison was ousted, the BPP held an ‘action’ in London. Or rather they held one of the ‘secret’ little gatherings they confuse with ‘activity’. Unfortunately for them, they got stopped by the cops on the way from their re-direction point to the meeting, and as a number of them were stupid enough to be carrying both weapons and drugs, they got nicked. As usual, ‘Teflon Kev’ was not arrested.

McDermody and the other idiots still in the BPP have since painted this routine encounter with the Plod as if they had really been in the trenches. Prior to the event, McDermody de-riding Morrison on the fascist internet forum ‘Stormfront’ had been bigging herself up as someone who could “walk the walk”. When she returned from London, after her minor brush with the Plod she was shaking like a shitting dog. Posting on ‘Stormfront’ under one of Watmough’s old user names (’Redwatch Admin’) as she had been banned at the time, McDermody was close to hysteria!

Now McDermody thinks she has been ‘blooded’ she is busy organising an anti-Hip Hop demo in Leeds, the date of which was suddenly changed after local antifascists announced they would oppose it. While the event has now been timed to clash with the London Anarchist Bookfair, we still hope that the BPP will be confronted and left in no uncertain terms about how the people of Leeds feel about having scum like Watmough and McDermody on their streets. Be there - HMV, Lands Lane, Leeds city centre - Saturday October 18th, 11.00am.


From issue 2 of ‘No Pasaran!’ the Antifa England newsletter, which can be downloaded as a ready-to-print PDF file from the Antifa website.