Upcoming No Borders Events in Newcastle

The UK No Borders Tour 2009 is visiting Newcastle from 30/04 to 04/05 and invites you to a series of events that aim to encourage discussion and build awareness of the injustices of the UK and EU Border Regime, as well as to call for action against them. 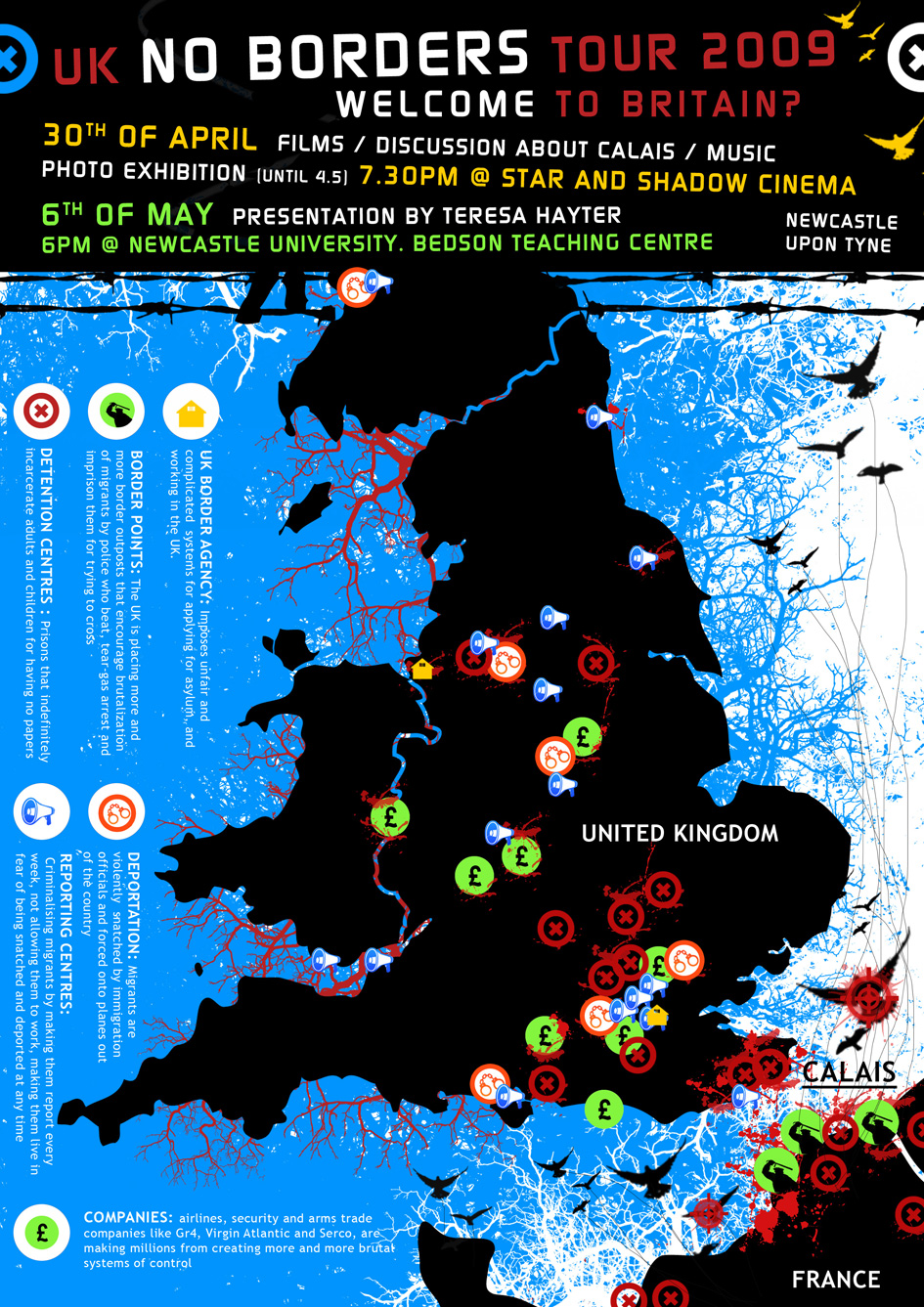 The UK No Borders Tour 2009 is visiting Newcastle from 30/04 to 04/05 and invites you to a series of events that aim to encourage discussion and build awareness of the injustices of the UK and EU Border Regime, as well as to call for action against them. The Tour will terminate in the French border town of Calais on 23-29th of June, an outpost of the UK border system, where it will meet activists and organizations from France and Europe to create a No Borders Camp that aims to highlight the brutal situation for migrants stuck at the UK-French Border.


30th April, from 7.30pm, @ the Star& Shadow Cinema: Screening of NO COMMENT, a powerful film about migrants living in limbo between the UK & French Borders; discussions about the No Border Camp in Calais; and the opening of an exhibition of striking photographs from Calais by French photographer Julie Rebouillat. Followed by music from The Casual Terrorist and No Fit State!


3rd May, No Borders stall @ the Star & Shadow Market! Come and chat, find out more about NB and the camp at Calais, watch films about migration for free! We will also have some of Julie’s pictures for sale!


6th May, at 6pm @ Newcastle University, Bedson Teaching Centre: The Case for Open Borders - a presentation by Teressa Hayter, writer and activist on migration and anti-racism. Followed by discussion and No Borders workshop.


Look out for more events announced soon and do get in touch with NB noth east if you want to host the UK NB Tour in a place near you!

The UK immigration system is designed to criminalise and persecute migrants. An unjust and complicated asylum-seeking process, migrant detention centres that detain people indefinitely and without right to bail, managed migration schemes that divide workers and people, destitution by being made ‘illegal’, and forced deportations. Calais is no different.

As part of agreement between the French and British governments, migrants trying to reach Britain (many to seek asylum from war-torn countries like Afghanistan, Iraq, Eritrea, Somalia, Palestine), are being persecuted by the French police; beaten, harassed, driven out of the town, forced to sleep rough in nearby woods, attacked during the night. People and organisations trying to support them also face prosecution, loss of funding and general harassment.

No Borders is a network of people who are fighting for the freedom of movement for all and to an end to all borders & migration controls. We call for a radical movement against the systems of control that divide us into citizens and non-citizens, into the documented and the undocumented. Join us at these events and at the No Borders Camp in Calais in June this year.