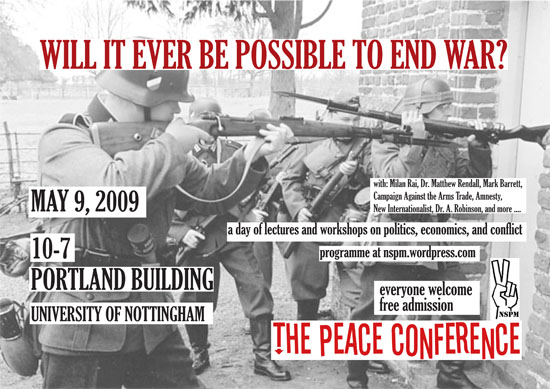 The event was held between 10am - 5pm, Saturday 9th May 2009, in the Portland Building, at the University of Nottingham.

The Event hoped to question why is there so much fighting, destruction and suffering on our planet? Is modern warfare really 'human nature'? How are conflicts related to economics and geopolitics? Is the capitalist system to blame?

A day of talks, interactive workshops, discussions, panel debates, films and food. The conference tried to engage in a range of topics and issues exploring the links between war and the dominant economic system of our time.

I recorded the presentation, given by Milan Rai, co-editor of Peace News, titled:

"The necessity of nonviolent conflict: Confronting the roots of war".


Other contributors included: Campaign Against the Arms Trade, New Internationalist, Shut Down H&K and Amnesty International.