In the run-up to the forthcoming Euro elections, both New Labour and the BNP hope to use racism to maximise their vote. The BNP will use the age-old tactic of scapegoating 'immigrants' and 'foreigners', and basically anyone who isn't white, while wooing those sickened by the greed and corruption of the mainstream political parties. In particular they will hope to appeal to disaffected former Labour voters who feel abandoned and betrayed by Britain's ruling political party. For their part, New Labour will be hoping to mobilise anti-racists into voting for them simply 'to stop the BNP', ignoring Labour's own appalling record of racism, and the fact that the BNP have only been allowed to grow in the political climate they have created. They will be aided in this cruel and threadbare chicanery, by the middle-class Left, who are clueless in their analysis of fascism and simply see the BNP as an opportunity to recruit gullible new members and swell the coffers of their party. Typical of this ilk are the ‘Searchlight’ front ‘Hope Not Hate’, who in return for heavy funding from New Labour and its political satellites, are attempting to lead another generation of anti-racists down the blind alley of electoralism. 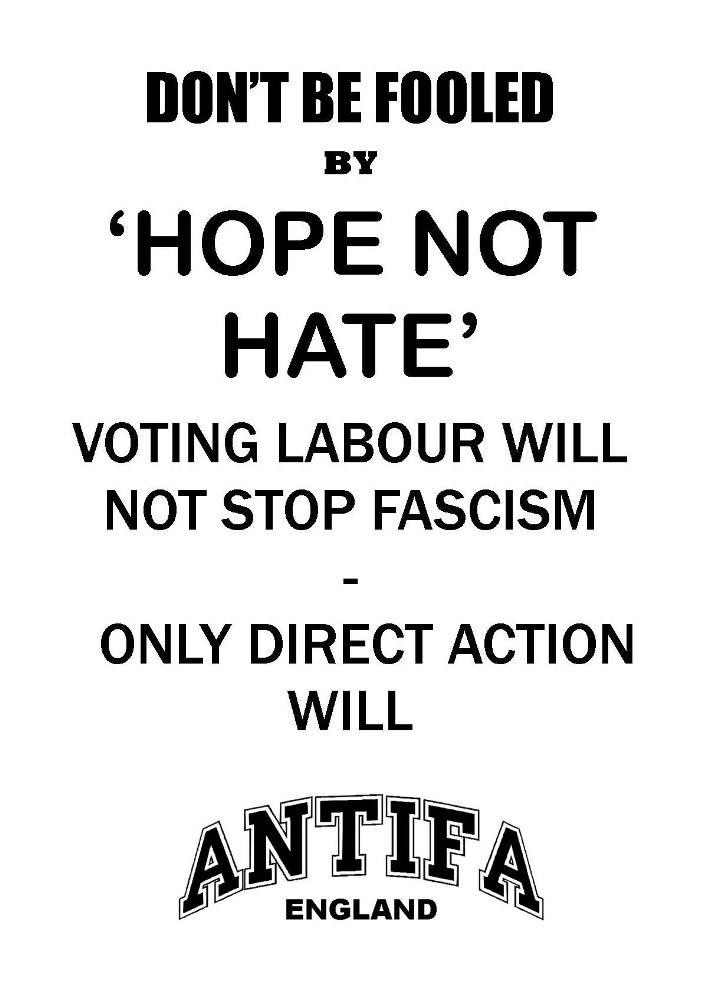 For decades the middle-class Left have told us 'Vote Labour without illusions' - or some other trite slogan. Under Thatcher, they told us we had to vote Labour to ‘Get Maggie out'. What did that get us? If anything it got us a government that was even further to the Right. Since 1997 New Labour have continued to shit on the poor and institute a vicious Police State. They have completely alienated working-class people, pushed the political agenda immeasurably to the Right, and fostered the rise of the fascist British National Party. Ordinary people are understandably VERY pissed-off with politicians.

The BNP are hoping to exploit the current economic crisis by scapegoating immigrants and asylum-seekers, and to capitalise on anger against Westminster by mobilising a so-called 'protest vote' - ie a vote for the fascist BNP. Meanwhile, the drips of 'Unite Against Fascism', 'Hope Not Hate, the 'Socialist Workers Party', and all the other middle-class idiots who told us to vote New Labour in the past, are telling us not to “waste” our votes! They know that working-class communities are not going to vote Tory, do they really think that a vote for New Labour is a vote AGAINST fascism?! This is the party that has been bombing the shit out of Iraq and Afghanistan for years now, and locking up and deporting refugees en masse.

It is this sort of patronizing and condescending stupidity that has led to the rise of the BNP in the first place. It is an insult to the intelligence of ordinary people. Antifa are not calling on people to vote Labour (or 'Respect' or whatever) to stop the BNP, we are calling on people to boycott the whole election charade, and to get out onto the streets and combat the rise of the BNP in the only way that matters - by Direct Action.

We can understand the contempt people rightly have for the mainstream political parties. We can understand why white working-class communities feel abandoned and alienated. But a vote for the BNP is NOT a so-called 'protest vote', it is a vote for FASCISM. Don't believe ANY of their lies. Don't play the politicians' games. Don't vote - Organize!

In a secret ballot, the British people will vote for whoever they fucking want, and - short of burning down the polling stations - there's no direct action you "anti"-fascists can take to stop them

what about supporting the Tamils, Antifa?

Where are Anti-Fa when it comes to supporting the plight of the Tamil population through solidarity actions over here such as at P. Sq in the face of the outright fascism of the Sri-Lankan government and their genocidal resolve? Not seen any of you down there

no black in the union-jack

Fascism is an elephant felt by blind people (apoloplgies to the AR folk here, it is just the best analogy). It is sensible for individuals to focus on what they know best. It is best not to bicker with other commited antifascists just because what current abuse is overwhelming you isn't everyones cause. Instead, bite your lip, express solidarity and focus on who you can recruit to help the Tamils.

A vote for Labour in the UK today is a vote for fascism. In my opinion that isn't a reason not to vote.

So we can't be antifa?

@ no black in the union jack

Tamils can be antifascists too thanks. Idiot. Do you think we should wear antifa t-shirts so you can see us better? What our people face is fascism. Both in UK and home.

Surely voting for one of the lesser of the evils is a better idea than letting the BNP get in? If we took your approach everyone who doesn't agree with the current choices should just let a racist party walk it. Genius.
Oh and for the record, its nice to see Antifa glazing over the past as usual, yes it was only the Middle-class left who campaigned for Maggie out and told us to vote Labour. The class war stuff is all well and good, and fair enough, but only when used truthfully. Don't alienate people from the cause with ill-informed comments.

Every circus has at least one clown

"Surely voting for one of the lesser of the evils is a better idea than letting the BNP get in? If we took your approach everyone who doesn't agree with the current choices should just let a racist party walk it. Genius."

Really? I guess none of the experienced antifascists in Antifa thought of that. Lucky they have some patronising middle-class liberal to correct them. What utter (and frankly tired) drivel. It's just this sort of rubbish that alienates ordinary people.

The class war never stops, and who cares about "alienating" someone as stupid as you? You just sound like one of the smug lefties who used to wear their 'I didn't vote for Thatcher' badges - They may not have, but they helped give her electoral credibility by participating in the excuse for 'democracy' that the state offers us.

If you really care about the BNP 'getting in', get involved in antifascist politics, and don't be mugged off by patronising idiots like this, selling a crock of shit, which is basically 'Vote Labour Without Illusions."

middle-class liberal? Wow i’ve never been called either before, and now both in one sentence, congratulations with the presumptuous comments.
How is what I stated drivel? You're saying don’t vote, ‘boycott the election’, so how exactly is what I said wrong? What I said is exactly what will happen if people say what was advised and don’t vote. Sometimes it’s necessary to take part in the system for the better ie. against nazis, until the chance comes to take it down. What’s the point of sitting around and moaning when the BNP get in, when we all have a chance to prevent it? I‘m all for antifa, but they're not going to stop a BNP electoral victory, thats a different kind of fight.
Oh and I won’t be voting New Labour in the slightest, so I don’t know where that’s come from. Another presumptuous comment?
I get fed up of self-proclaimed ‘working class heroes’ championing our rights, whilst continuously blaming the middle classe left for everything in our name. That comment about the Thatcher era was painfully inaccurate. As I stated class war is fair enough, and all well and good, but not when used inaccurately. It shows the real working class people up, then again maybe you wouldn't know that.

"Sometimes it’s necessary to take part in the system for the better ie. against nazis"

A similiar line has probably been used by every hypocrite, sell-out, traitor, and quisling since time began. Didn't Hitler come to power through the so-called democratic process? I don't think it was because not enough people didn't vote 'against' him.

Stop the circus I want to get off

You were also called patronising. Sounds like that hat fits to me.

I'm not gonna tell anyone what to do but as for me I'm voting Green on June 4th. I don't want the fascist BNP to gain a seat, I don't want Little Englander UKIP to gain a seat and I don't want to vote for the Big 3 parties who support the occupation of Afghanistan. I feel that not voting in this particular scenario is an own goal. Voting doesn't stop you from taking direct action, as someone has already said. I wonder if this post gets me dismissed as "middle class".. ha ha

WTF? how is not voting going to stop the BNP? surely that will be playing right into their hands. The election will take place no matter who decideds not to vote, if everyone decideds not to vote to keep the BNP out then thats just making it more likely they will get in, and you'll be the first one the start crying about it when it does happen. Who say's that you have to either vote or take part in direct action? why not do both? and who is saying you have to vote for labour? there are plenty of other people to vote for.

Just because you vote dosn't mean you are some how legitimising the system, it's purely a tacticle vote to keep out the worst possible result. you can be against voting and the 'system' but still occasionally vote tactically if it means a slight improvement to the current state of affairs

Beyond Joe Hill - the ballot and the bullet

"
If the BNP make headway in the forthcoming Euro elections it will be because the Left in this country have no currency whatsoever with the working-class, because they have been utterly betrayed by New Labour, and because of apathetic anti-racists who think that voting "against" the BNP is a substitute for real antifascist politics.
"

No one is suggesting voting is a valid alternative to organising, so why not explain why you can criticise voters who do organise. I'd actually take that further, people like Antifa don't just organise, they take direct action. It isn't enough to just organise, not in a police state that Joe Hill could barely imagine. We need to act, and we need people like Antifa to act.

Many of the current day IWW inheritors of Joe Hills crown (of thorns) do act and do vote. People like Utah Phillips can't be dismissed lightly after his life-time of previously not voting.

At the last election I was one of two posters here who recommended voting if only negatively, now it seems that is a more common theme. (The other guy I know to be either mad or MI5 so tread cautiously). Voting probably does you no good, it could do you some harm if you believe it does you any good, but it costs you nothing. It does literally cost the political parties to vote against them, because they have a lower share of the vote and are more likely to lose their deposits.

Yet everyone I've ever known who has self-selected themseves as a candidate is either an arsehole, or is on the road to be an arsehole. In my arrogant opinion, voting is a far lesser act than anything else you could do, but it isn't neccessarily negative.

A possible compromise would be for Antifa members to stand as election as 'protest candidates' on the platform that if you were elected then you wouldn't attend parliament and you would give your salary and expenses away to Antifascist groups.