Leeds peoplen Banned from their own streets

Police in Leeds have banned people from their own Streets 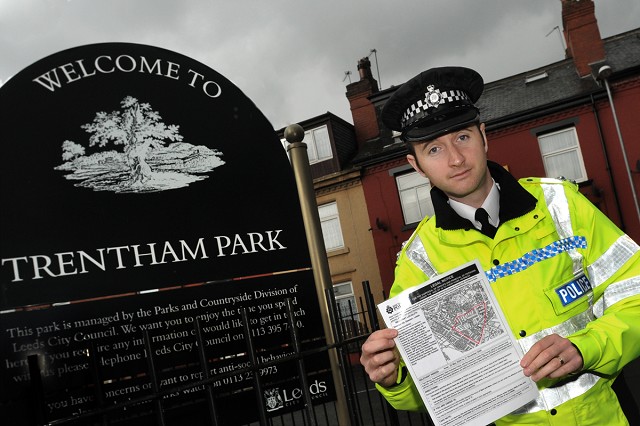 Police Inspector Miller Stands Proud with his dispersal order for Beeston hill in Leeds.
The order gives police and pcso, civilians pretending to be police the power to order people to leave the area or face 3 months in prison, even if they are living in the area where they are ordered to leave, the order also bans anyone under 16 who are prohibited from public spaces within the dispersal order zone from 9pm through to 6am, unless they are accompanied by a parent or a responsible adult over 18 years of age, which can be banned under the first order.
What exactly gives a civilian worker in a green jacket the power to order someone to leave the street where they live and the right to forbid children from playing on the streets where they live and the right to order people under 16 not to be on the streets where they live.
Is this one step to far ?

It's not that hard to google "Beaton Hill" in the news, it's easier than to post questioning the article.
Good quote from the thought police -
"This preventative measure allows us to stop anti-social behaviour before it starts".

I got issued with one of these in London

about a year or so ago a few of us went to some Tom Cruise premiere in Leicester Square to hold up some peace signs. We got forcibly removed from Leicester Square and issued with ASDO's banning us from central London for 24 hours.

not the first time

i remember these! sadly not a joke.

a couple of years ago i was living in a part of hackney (east london) called homerton. its an area of extremes - on one side horrible council flats, on the other rich people who can't quite afford islington (north london borough next door).

a huge section of the area had these signs on every lamp post. i tried to get people interested in resisting it all but failed miserably. hope people still have a bit of fight left in them in leeds, this oppression makes my blood boil... (and my life less safe, as i often walk the streets and have more than once been "rescued" from attack by local youth and/or homeless (including street drinkers).

Quite widespread across SE London

These dispersal orders are quite well embedded as general practice in places like Bromley, Greenwich and Bexley - little signs, often simply photocopied, laminated and stuck to sign posts claiming that it is a dispersal zone. Commonly, kids are the preferred target, although street drinkers are usually moved along as well (as well as having their lager poured out by the rent-a-cop).

Wasn't it Goebbels who said that whoever controls the streets controls the state? As much it grates against my sensibilities to appropriate tactics from the Nazis, there may be some value in taking such a strategy to heart: hence reclaiming the streets.

are more worthless than the real deal, also they have no powers to do anything whatever they say ignore them

It's a good idea

Kids shouldn't be out on the streets late at night. I support this initiative.


They have two separate “war on youth” notices for two adjoining areas in Bristol (St Paul's,Easton). And I have heard of more.

Last year a friend found one of these little “war on youth” notices attached to a lamppost on the very outskirts of Brighton, but upon taking a closer look discovered that it was for an area of Nottingham,!!! (a dedicated bit of redistribution there eh!)

Maybe we could all take them on our travels around the country,

But seriously its scary how much right to stick their snouts into peoples business PCSOS have now.

No, it's not a good idea

Ruby says kids shouldn't be allowed out at night. Why the fuck not? Think about it. We've now got to the point whereby the State tells certain groups in society that they must be inside a house at certain times!! Why not stick em all in a ghetto and be done.
Dealing with capitalist state problems like aggression, burglary etc is a separate issue that shouldn't lead to a blanket curtaiing of our freedoms.

Think this one through

A dispersal notice is simply giving a cosmetic approach to crime reduction: it moves the problem along. Trouble is, the problem gets moved along and moved along without ever really being dealt with. The nuLabs did not get tough on crime nor on the causes of crime. They spun it around and moved it along, calling displacement success. Don't expect anything more helpful from the Tories, of course ... despite the "hug a hoodie" rhetoric of Cameron (while he was on the ascendancy, anyway). Tories are enablers, not providers ... so be aware that they will enable cops to use more of these powers whilst not providing services and follow through that is needed to reduce crime genuinely. It's all spin and bullshit, but keeps the Sun-reading yobbo happy.

No kids on the streets?

The reason kids are generally on the streets in these areas is that they do not have nice liberal parents who let them drink and experiment responsibly and they generally have fuck all else to do. I remember that as a youth I would often drink or have a spliff or two in the local park with mates harming absolutely nobody. The police would swoop in and confiscate our booze and whatever else and we would generally end up getting into much greater trouble often influenced by older youths who had there own houses to go to and would be into hard drugs etc. I remember once ended up in a car someone had stolen simply because the police kept moving us on and we had nothing to do. We even used to get moved on for playing football on the local park in goalposts we had built and erected ourselves and the fash kicked them down talk about rewarding troubled kids for engaging in wholesome activities. I believe the police often just kept what they confiscated because once we managed to liberate some of our goods from the local bobbies house. I think they just thought it was funny to keep doing it tbh.

some kids need to be on the streets, or at least not at home, as a matter of survival. these kids are not safe in their homes because of the actions of the adults who live there. don't underestimate the numbers here its a real problem.

proportionately speaking very few kids ever commit any property damage or behave in a particularly anti-social way, especially when you count the percentage of adults who do.

as long as the adults (who run this society) deny children access to community spaces (because of lack of cash or because so many community spaces are alcohol based) and fail to provide seperate youth spaces for the kids, those who don't want to or can't be at home will hang out on the streets.

curfews force kids to stay in with abusive adults, they are never right or fair.

if the kids are messed up, that is the adults' responsibility, we should never punish them for their reactions to growing up amidst poverty and/or abuse, but help them to find safe spaces.

as a teenager out after dark you are far more likely to be a victim of crime than you are to commit a crime, check the police website if you don't believe this, the statistics are there. and that's just the reported crime figures, how many kids report to the (adult) police when an adult hurts them?

These tactics are regularly in use across Liverpool. Nobody is going to thank me for this comment, but it is worth saying. Sometimes these initiatives actually work. The circumstances where they do work are extremely limited. The potential for the initiative actively causing harm is frequently greater than any imagined good.

They do not work when the PCSO spearheads the initiative. This generally has the effect of making the streets more dangerous. Children, young adults and street drinkers are easy to move on. People with genuinely sinister reasons for being on the streets are not cowed by the woodentops. They will generally decamp to just outside the temporary ghetto and the street crime there will tend to shoot up. So that is no win for the Police - displacing crime is not sorting anything out.

The initiatives do work when the Matrix and CCTV crews pass through looking for out of date tax discs and known offenders. The only reason being that known offenders are found is, quite simply, the police target the areas where poverty is highest and offender residency is highest. This allows the Police to obtain a statistically higher clear up rate - by concentrating on petty offences by known offenders and their associates - which offsets the crime displaced by the sweep.

Where the initiatives work is where 1) a sweep is done 2) the police respond (not rentacops) to all complaints 3) traffic calming is put in place 4) alleygating is put in place 6) genuine opportunities for children to enjoy life are put in place 7) Police (not rentacops) patrol the area afterwards, on foot. 8) the local council begins concerted efforts to ensure everybody has the correct benefits and put forward non-security-related community schemes.

The problem for the Police is that the whole approach is kettling on a grander scale. Unless the rentacops are to be TSG trained to contain the outrage that it creates then there are likely to be civil disturbances on a greater or lesser scale. When the scheme goes wrong, it does so on a tragic scale.

The death of Rhys-Jones took place in a designated area. The repercussions continue to be felt. Not only in the lives of those directly involved but in the life of the surrounding communities who have been criminalised. If the Police wish to use hearsay they can, do and ultimately the whole community suffers.

Where the Police use deisgnated areas and fail to do so with the utmost care, the consequences are felt for years.