'Hope Not Hate' Unleash Their Secret Weapon Against The BNP 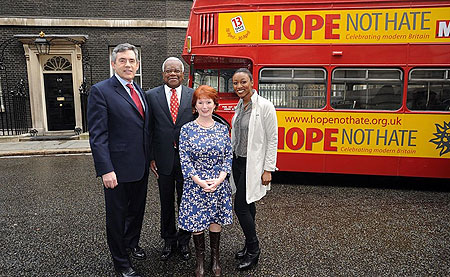 With only a couple of days to go until the Euro elections, the ‘Searchlight’ front, ‘Hope Not Hate’ (HNH) have unleashed their secret weapon in their campaign to stop people voting for the British National Party (BNP) – The Prime minister!

Beleaguered Gordon Brown was happy to take a photo opportunity with the HNH bus, and to be the prime signatory among politicians and liberal luvvies signing a statement pushing the HNH line. While astute antifascists have always been aware that the real message HNH wished to promote was ‘Vote Labour’, it is hard to think of a stunt more likely to push voters into the arms of the BNP than the kiss of death from Gordon Brown, the leader of a struggling corrupt government, and the man most people are likely to blame for the current economic crisis. The stunt certainly makes HNH’s real role crystal clear though, as little more than a Trojan horse for New Labour and a cynical attempt to con antiracists into backing a viciously racist authoritarian party in order to prevent the encroach of the viciously racist and authoritarian BNP.

The SWP front ‘Unite Against Fascism’ (UAF) may not be as solidly in the New Labour camp as HNH, but they are still bleating the same tired line – ‘Don’t WASTE your vote’ – As if a chance to put a cross against the name of one scumbag or another has any WORTH. Ordinary people KNOW they are being conned, not only by New Labour and the Tories, but also by the liberal Left, whose credibility in most working-class communities doesn't even rival that of the BNP. If the fascists fail to make a breakthrough in the Euro elections, it will be no thanks to the UAF or ‘Hope Not Hate’.