Report of Palestine action inside and outside M&S in Newcastle, 04.06.09

On Thursday 4th June 2009 campaigners targeted Marks and Spencer’s Newcastle store with a series of actions intended to raise awareness of the company’s links to Israel and build pressure for a total boycott, as part of the international Boycott, Divestment and Sanctions movement. Pickets continue weekly in Newcastle, Thursdays from 5-7pm on Northumberland St 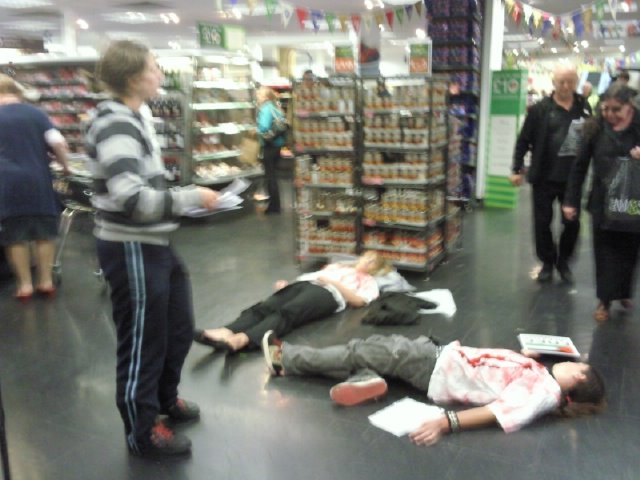 Die-in and leafleting inside the store 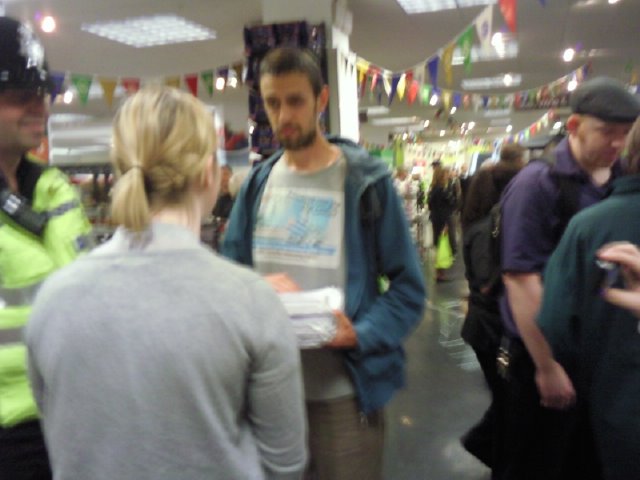 Attempting to deliver the petitions to the duty manager 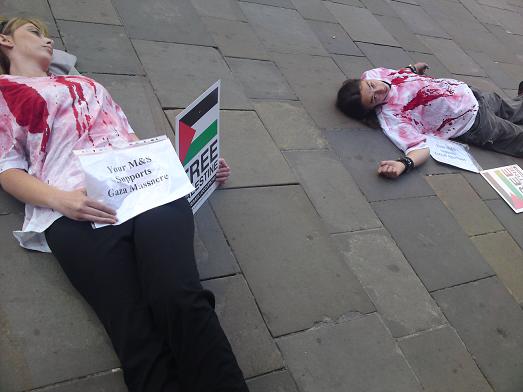 Die-in outside the main entrance 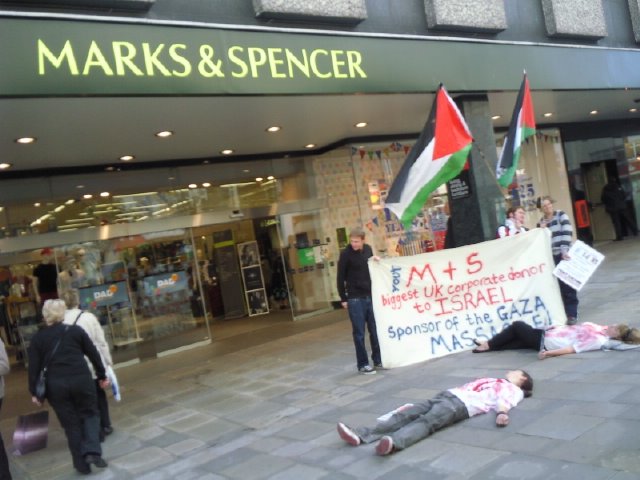 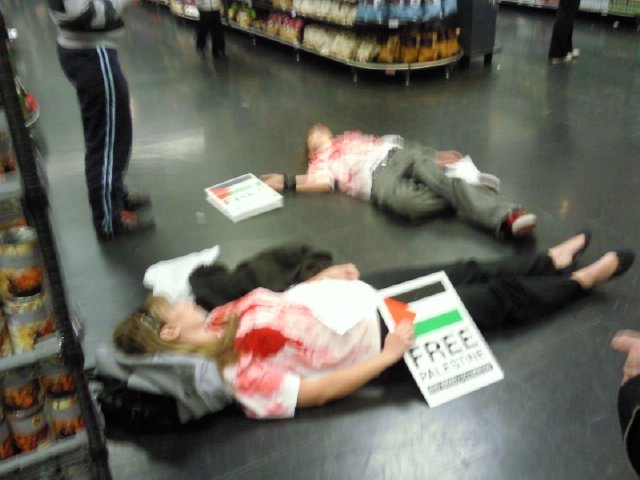 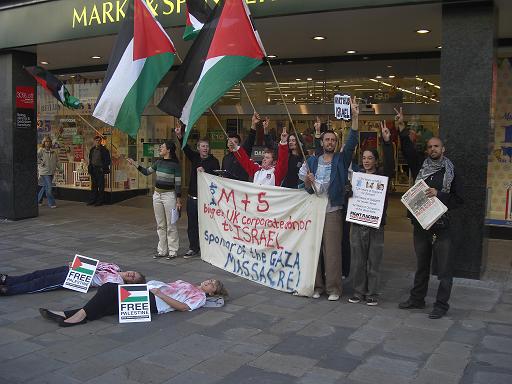 Victory to the Intifada!

Activists dressed in t-shirts covered in red paint staged a die-in inside the store whilst others handed out leaflets and addressed shoppers with a megaphone. When the duty manager eventually appeared they were presented with a petition signed by over 5,000 local residents, the majority since the beginning of this year, demanding solidarity with the Palestinian liberation struggle and an end to M&S support for Israel. The manager refused to accept the petitions, initially claiming that they had no fax machine and then that they did not have a fax number for their head office. The activists then marched through the length of the store, chanting ‘Free free Palestine’ and ‘Marks and Spencer foots the bill, Israel uses tanks to kill’, before gathering for a noisy protest and die-in outside the store’s main entrance. Asked why they targeted Marks and Spencer in particular, Fight Racism! Fight Imperialism! activist Danny Matthews responded:

“Marks and Spencer have a long history of support for Israel. There have been M&S directors active in support of Israel since its foundation. Today they not only sell a large number of Israeli goods, but lobby on Israel’s behalf through the British-Israel Chamber of Commerce and other forums. M&S say they are celebrating 125 years in business this year, but they have been backing 60 years of misery and occupation for the Palestinian people. M&S are a British company and an important symbol of British corporate support for Israel, and that’s why we’re targeting them today.”

Campaigners say the protests were timed to mark the 42nd anniversary of Israel’s acts of occupation in June 1967, which resulted in the displacement of over 200,000 Palestinians from their homes, many of them already refugees from the 1948 displacements brought about by the establishment of the Israeli state. Israel’s occupation of the West Bank, East Jerusalem and the Golan Heights continue to the present. The occupation of Gaza ended formally in 2005, but has been followed by repeated incursions by Israeli military forces, most seriously in the summer of 2006 and in January this year, resulting in substantial civilian deaths and injuries and destruction of vital civilian infrastructure, leaving 90,000 homeless and many without electricity or clean drinking water. Campaigners say that the population of Gaza is also suffering under a crippling blockade imposed by Israel since the summer of 2007.

In Britain pickets of Marks and Spencer were first reported in Manchester in autumn 2000 following the start of the second Intifada (uprising). They quickly spread to cities around Britain, with a weekly picket of the company’s flagship store on Oxford Street in London continuing from 2000 to the present.

As early as the 1940s M&S Chairman Israel Sieff openly advocated ethnic cleansing in Palestine: “large sections of the Arab population of Palestine should be transplanted to Iraq and other Middle-Eastern Arab States” (Jewish Chronicle, 21/09/1941)

M&S received the Jubilee Award, Israel’s highest tribute, from Israeli PM Netanyahu in 1998, for its services to Israel. In Nov 2000 the Israeli ambassador to London honoured M&S for their economic support to Israel (Jewish Chronicle, 24 November 2000).

M&S today is one of the core members of the British-Israel Chamber of Commerce (B-ICC). CEO Stuart Rose was guest speaker at the annual dinner of the B-ICC on 09/12/04, alongside the Israeli ambassador and the British ambassador to Israel (www.b-icc.org.uk).

M&S’ Political and Ideological support for the racist Zionist regime continued when Stuart Rose spoke alongside the Israeli Ambassador at a meeting in support of British ORT, an organisation actively building support for Israel in Britain, whose chairman David Sieff is also a director of M&S (08/04/08)

M&S’ consistent support for Israel can be explained by what CEO Stuart Rose described on 8th April 2008 as a management policy of “internal succession, to nurture managerial talent that was already imbued with the values, goals and strategy of Marks & Spencer.” Part of those values and goals has always been – and continues to be – support for Israel.