A busy week here in Mayo

Work continues in Glengad, but so does action resisting the pipeline. The Rossport Solidarity Camp is active and running, so please come and visit! Come and see what is happening with your own eyes, and bring whatever skills and talents you would like to share. Here is a five day update. 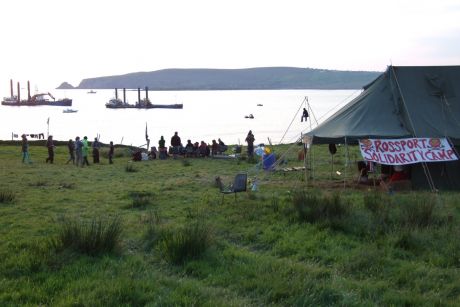 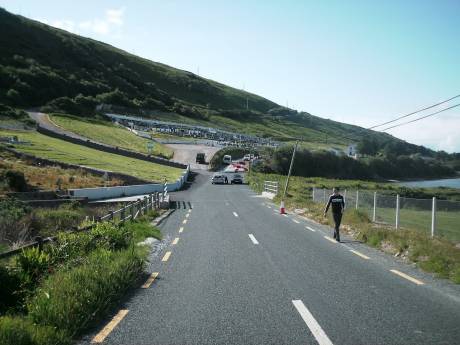 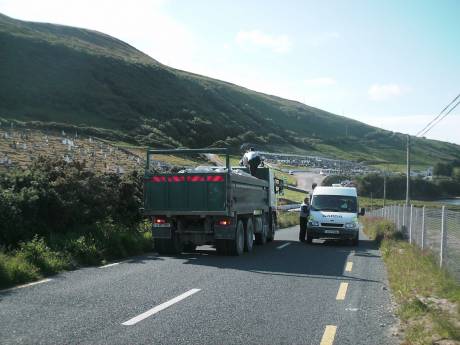 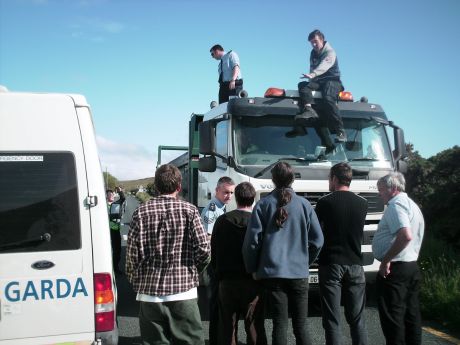 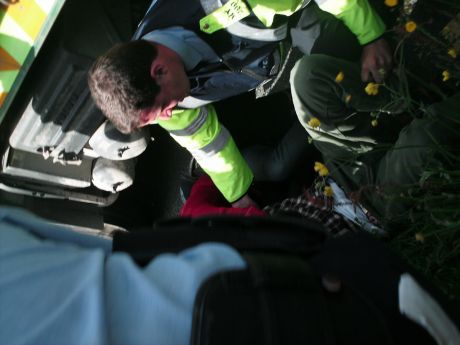 Belmullet Courthouse:
There was a packed courthouse in Belmullet on Wednesday with 31 Shell to Sea people up in court. The timing of this court date is undeniably political, considering 13 of the charges were from September 2008. Presumably court has been timed to coincide with the imminent arrival of the Solitaire. There was a new judge in place of Mary Devins, judge Denis Mclaughlan. Only one case was heard that day, and the rest of them had their cases adjourned until the 8th of July. The numbers on camp grew on Wednesday as many people who had to return for court remained on camp.

Truck blockade:
Around 5:30pm on Wednesday, locals and supporters attempted to block a convoy of four trucks along the road to the Shell compound. People moved plastic barricades into the road by the graveyard in Glengad, leaving enough room for cars but causing the Shell trucks to have to stop in the road up by Kilcommon Lodge. The trucks were carrying gravel and hardcore for building the causeway at the Shell compound on the beach in Glengad where the pipeline is proposed to come ashore. While the trucks were stopped, one person attempted to speak with the drivers, engaging in heated but civilised conversation with one of them. The main argument was that when people's lives are at risk, it is no longer 'just a job'. As this conversation was going on, the truck at the front of the queue started to move, and a protestor jumped onto the back of it and climbed into the bed of the truck. After the driver was informed that a protestor was aboard the truck he slowed down a bit but continued to drive until finally coming to a stop after about 100 metres. The protester sat on top of the cab of the truck until the gardai arrived and after about 10-15 minutes began to forcefully remove the protester.

As this was happening on top of the truck two people climbed underneath it. The gardai moved in and wrestled one protestor out from under the truck. As he was on the ground guards grabbed one of his feet and raised it above waist height, he was then dragged across the road in this position causing a considerable amount of pain. Several garda then climbed underneath the truck and violently dragged the other person out. Simultaneously four gardai were removing the person from the top of the truck, lifting him over their heads and sliding him down the side onto the road. Officer MY2 made a verbal promise to the protester that he would take down the details of the truck driver because of his reckless driving. Finally after 10-15 minutes of being pinned to the ground with his arm twisted behind his back, the person on the ground was brought to a standing position and arrested, though none of the gardai would explain what he was being arrested for when asked. He fell to the ground as he was being put into the police van, and had to be lifted into the van by several garda.

Though the person who had been on top of the truck was not immediately arrested, soon afterwards he was arrested under three charges: obstructing traffic, breach of the peace, and refusing to obey the orders of a garda. Both arrestees were held in custody overnight and brought to court in Westport the next morning before they'd recieved legal aid. The gardai attempted to have them both put on remand, which means they'd be put in jail until the next court date on 8 July. They also have begun asking for bail, from 100 euro to 500 euro, something which hasn't been done at all in the past several years of the campaign. This seems to be a political move by An Garda Síochána in an attempt to repress the campaign. There is no reason to suspect people of flight risk, as there has never been a problem with people showing up to court in the past. When asked why they are doing this, the only explanation is that 'this is the new policy'. However it is not clear whether this is the new policy for anyone arrested in Ireland, or whether it is something put in place strategically to deal with political protestors. The two truck-blockers were held until the next morning, and brought to court the next day. One of them was forced to go to Castle Rea prison to sign his 500 euro bail. He was released at 6pm on Thursday after being held for 24 hours for a simple breach of the peace.

Sinking of the Chief's boat- Definitive account from Pat himself:

Pat O'Donnell's fishing boat was boarded by four masked men, two of whom were armed with guns, at approximately 2am on 11 June whilst out at sea laying pots. The two armed men held Mr O'Donnell and his crewman Martin McDonnell in the wheelhouse of the boat while another two went below deck for 20 minutes. These men returned to the deck and the two crew members were held for one and a half hours until the engine went out. At this point the masked men alighted onto an unknown vessel that took them away. None of the men spoke good English. Mr O'Donnell went down to the engine room and realised that the boat was sinking.The two fishermen put out a mayday signal and attempted to inflate their lifeboat. The inflation mechanism failed a number of times but eventually worked with only moments left to spare. Once onboard the lifeboat Mr O'Donnell and Mr McDonnell sent out a distress flare. They were rescued at 4.30am by the 'Rachel Mary', another boat owned by Pat O’Donnell and operated by his son, fisherman, Jonathan O’Donnell. He then rang the Gardai at around 6am to inform them of the incident.

Pat said "I was in fear for my life, is there no end to what these thugs will try to do? AIl I am trying to do is protect my family and the seas that are our livelihood. I told Minster O'Cuiv in April that I needed protection by the state, but he wouldn't give it - now its time for the government to protect its people. I won't be intimidated by this."

Pat O’Donnell is a local fisherman with over thirty years experience in the waters off the coast of Ireland. It is assumed that Pat O'Donnell was targeted as he is one of the loudest objectors to Shell's Corrib Gas Project. As a fifth generation fisherman his livelihood will be severely affected by pollution from the corrib project into Broadhaven bay. Determined to protect the waters for future generations of fishermen, Mr. O'Donnell has consistently refused to be paid off by Shell.

At 4:30am, 14 kayakers set out to try and disrupt the works being carried out in preparation for the laying of the offshore pipeline in Broadhaven Bay. The gardai were quickly on the scene, and began arresting people under public order charges, failure to obey the instructions of a garda. Over the course of an hour, work was sucessfully disrupted and six people were arrested. The gardai confiscated the six kayaks of the arrestees, slashing five of the inflatable kayaks with knives. The gards have heightened their intimidation tactics, telling first offense arrestees that they may have to spend a week in prison simply for a breach of the peace violation. They are doing whatever they can to discourage people from doing further actions against Shell, attempting to put people on remand, charging disproportionate amounts for unnecessary bail, and arbitrarily attempting to get people 'banned' from Broadhaven Bay. Allegations that this early morning action kept rescue teams from responding to Pat O'Donnell's distress signal are unfounded. The kayak action was unrelated to that incident, and is fairly unimportant compared to the seriousness of the attack on Pat and Martin.

Early Friday morning, a local bus driver was followed by the gardai on his bus route, then arrested in his own home after he had dropped the bus full of kids off at school. The gardai claimed to have video footage of him taking part in the removal of nets. The indcident happened in April when nearly 200 local residents and supporters went to take the nets down from the special area of conservation where the endangered sand martins nest. However the footage was unreliable and according to the person he was not even at the protest that day, so the gardai let him go without charging him. To arbitrarily arrest a person in their home nearly two months after an event without substantial evidence is plain terrorism.

At 10am Friday morning, a local resident blocked Shell trucks from passing his house by parking his car in the road. His house has been damaged due to the heavy traffic from Shell's trucks on a road unsuitable for haulage and after recieving no response from the Mayo County Council, he took action. The trucks turned around, promising that there would be no traffic for 'a few days.' The gardai were informed that this action was going to take place beforehand, and they did not try to arrest him. The local community has vowed to continue the blockade once the trucks start up again.

Sunday 14 June
Late Sunday night a group of 7 kayakers set out to disrupt the dredging going on in Broadhaven Bay, but were instantly met with a fleet of 9 motorboats. Work was stopped for about 15 minutes, and one kayaker was capsized by one of the security boats. They took the inflatable kayak into their motorboat and left the person swimming in the water. One of the security guards grabbed hold of the person by the neck of his lifejacket and dragged him through the water. When other kayakers tried to intervene, they were violently dealt with by the security boat who proceeded to take one kayaker's paddle and abandon her there. Despite this aggressive behavior on the part of the Shell security, everyone made it back to shore safely. People are in high spirits here at the Rossport Solidarity Camp, and the resistance will continue as long as the work on this project does!

I hope someones got the copyright for making the blockbuster movie,

inspirational. Shame on Royal Dutch shell, is this how 21st century corporations that wants to be sustainable acts?

It will cost you&people billions to keep going against public opinion & scientific sense on operations like this, so stop before even more of your own shareholders pull out. There loads of sustainable opportunities, next Bilderberg ask Queen Beatrix to plug for more long term cooperative profit instead of short term greed.