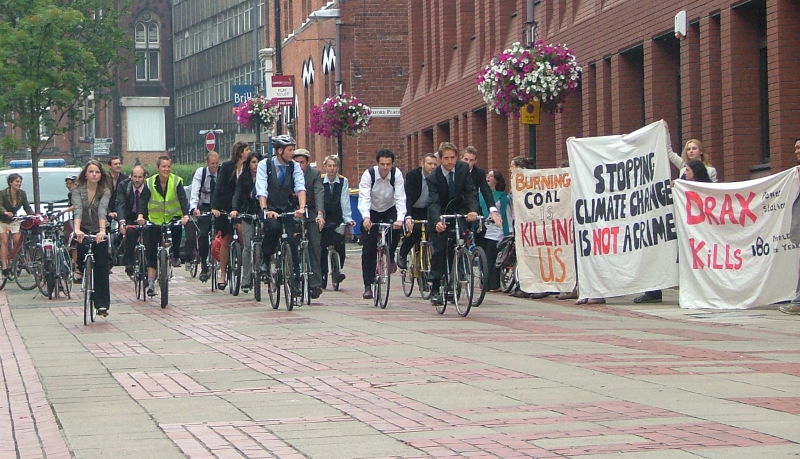 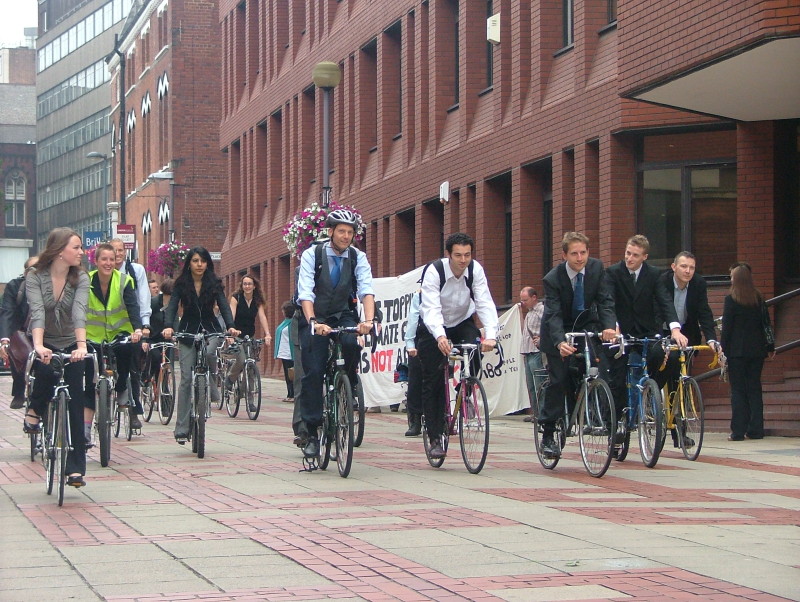 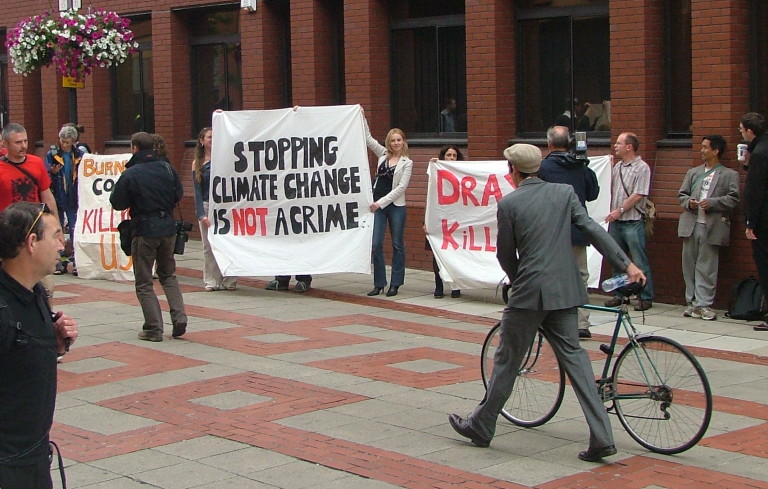 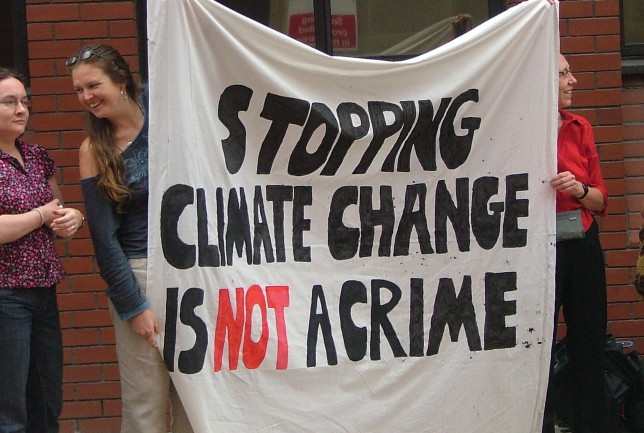 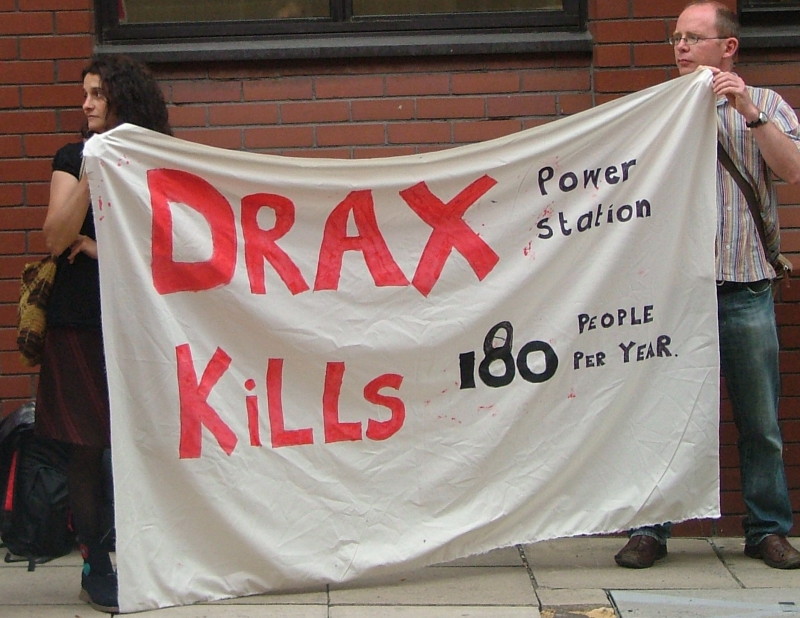 Today emergency health warnings were being broadcast about the latest potentially fatal heatwave to hit the UK [1].

The UK government and power industry have dragged their feet throughout efforts to bring emissions down to safe levels, or even to reduce their rate of growth. Despite decades of reassurances from government and industry, the UK is producing more emissions now than ever. In the face of this global emergency, it's a source of great hope (perhaps our only hope) that a small but growing number of people are willing to take matters into their own hands at great personal risk.

The "Drax 29" are twenty-nine ordinary people who took direct action against the fossil fuel madness last summer. As was widely-reported at the time [2] [3] [4] [5], they stopped a train-load of coal on its way to the power station.

The defendants are unable to discuss the bizarre strictures imposed on their defense until after the trial. They arrived by bicycle at Leeds Crown Court today. A large crowd gathered outside to show their support, with banners saying, "Burning coal is killing us," "Stopping climate change is not a crime," and "Drax power station kills 180 people per year."

One of the people who came to show their support said, "Direct action is the only option left, everything else has been tried and failed. What people need to understand is that this is an emergency."

The trial is expected to last up to two weeks.

[2] Leave it in the Ground: Drax Coal Train Halted

This is a call out for continued support each day outside the Crown Court in Leeds. Come down to the Crown Court from 9:30 to 10:30am with enthusiasm and support. Banners will be provided!

Public support of climate activism is an essential part of keeping climate change on the agenda.

As the case will depend on the jury's opinion please dress accordingly. If you actually want to go into the court room try and come smartly dressed!

Come on 00s they even named Drax after a James Bond baddy,help give

these people a break. Climate change could do trillions of pounds worth of damage soon as well all lives & land lost. Already sea levels are continuing to rise around the UK, theres lots of "alternative" energy options.
Politicians& corporations should end the fossil fuel wars& Sustainability should be a top priority for the ministry of defence. Britains 1st troop movements in world war 1 were in Iraq, battles stopping the nazi oil supply were key in ending the 2nd world war& to help stop the war on terror we need to make the world sustainable.
Ian Flemings character or anyone shouldnt want to be on the side of Drax, do you want to be a loser?, if climate change becomes irreversible we all lose, so lets win.
Drax is a disgrace, like the James bond villain he needs shutting down & monitoring not protecting, like Ian Flemings bad guy, he is a dirty poisonous,genocidal old maniac, who probably fought for the nazis in ww2.

Mansell (proecuting counsel) told the trial, which is expected to last for a fortnight, that the 22 would be representing themselves and were likely to seek political sympathy rather than challenge the facts. He said that there was no question that the train had been illegally stopped and boarded, and the defendants would not seek to deny their actions.

"You may wonder therefore what possible issue it is that you are here to try," he said. "We must wait and see, but the Crown suspects that what is happening here is that the defendants may seek to play on your emotions, and your sympathies with their cause, if you have them, so as to find them all not guilty.

"If you were to do this, by effectively ignoring the evidence, that would not be true to your oath or affirmation. If they are guilty in law of the offence, then the only true verdict is one of guilty."

"The Crown says that they are preparing a misuse of the court process to continue the protest action which they started when they boarded that train just over a year ago."


Which is complete bullshit. A jury has every right to judge the law as well as the defendants.


"In 1982, during the Falklands War, the British Navy sank an Argentine Cruiser – the "ARA General Belgrano". A civil servant (government employee) named Clive Ponting leaked two government documents concerning the sinking of the cruiser to a Member of Parliament (Tam Dalyell), and was subsequently charged with breaching the Official Secrets Act. The judge in the case directed the jury to convict Ponting as he had clearly broken the Official Secrets Act by leaking official information about the sinking of the Belgrano during the Falklands War. His main defence, that it was in the public interest that this information be made available, was rejected on the grounds that "the public interest is what the government of the day says it is", but the jury nevertheless acquitted him, much to the consternation of the Government. He had argued that he had acted out of 'his duty to the interests of the state'; the judge had argued that civil servants owed their duty to the government." (Wikipedia)

What is going on here?!

So is this the explanation I've been looking for for why the defendants are not allowed to discuss their motives for carrying out the action? Because I've been flummoxed as to why the judge is allowed to do this! It still doesn't really explain what is going on here- essentially what the judge is saying is that there's only one possible outcome- that they are found guilty and convicted- and they can't discuss the restriction until it's too late? Bull-s**t!!

Can anyone who knows their legal stuff explain why this trial is being treated so differently from the Kingsnorth 6 trial? I mean, I can see the political reasons on the Crowns side of it for why it's being stifled, but what is the LEGAL justification for this? Why were the Green Peace protesters 'allowed' to call expert witnesses while these guys cannot? To quote an article in the Guardian:

"The court heard that the protesters had lined up academic witnesses and a scientist from Nasa to address the jury, but this had been ruled inadmissible."

The Kingsnorth Six were initially acquitted of Criminal damage - that has a defence built into it of necessity - they persuaded the jury that it was necessary to damage Kingsnorth to prevent climate change.
They were all recently retried for Aggravated Trespass - it doesn't have a defence of necessity built in AND it is tried in front of a Magistrate (District Judge) with no jury - guess what they were all convicted!
The Drax defendants are being tried for stopping a train - it doesn't have necessity built in either. It would appear that the defence tried to run a defence similar to the Kingsnorth one but this seems to have been ruled out by the Judge - this happens at pre trial hearings.
It would seem that the CPS won't be bitten twice!


Thanks for the info, Green Man (she says, grimly).

Best wishes to all those connected to the action.