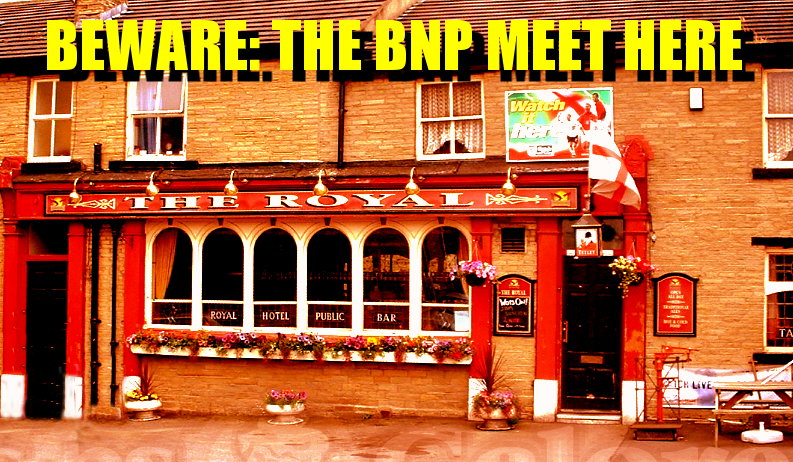 The BNP in Bradford including Griffinite cronie councillors, Paul and Linda Cromie, are currently meeting at a popular music venue that regularly hosts local bands from West Yorkshire and beyond, the Royal pub in Low Moor. Like their hero Adolf Hitler with his beer hall meetings, it's particularly sad that neo-nazis use alcohol to spread their message of hate.

The Royal is sadly the latest venue where West Yorkshire's fat and ugly BNP demifuhrers meet regularly to plot their coordinated racist campaigns, while hoping to indoctinate some of the venue's younger drinkers.

Described by one drinker as a "proper BNP party members pub", this isn't just an ordinary bog-standard boozer. This popular Low Moor pub is unwittingly being used far right thugs from around the region to spread the fascists' poisonous message of hate by rabble-rousers such as the Cromies...

These Nazi scumbags will always find some hovel to meet at, but what is particularly worrying here, is the Royal is popular with young musicians, most if not all of whom are unaware that this place has become a fash-friendly pub.

We do not ensorse anything but a peaceful, lawful boycott of the premises, and in particular, we advise both potential drinkers and any musicians due to play there to think twice about supporting premises which hold regular BNP organisers' meetings.

(not the Royal in Heckmondwike, another BNP haunt)

Hopefully the manager/landlord will step in and ban the likes of the Cromies from gathering there, when anti-racist drinkers vote with their feet and drink elsewhere, and the takings fall!

Arsed-brained BNP trolls, don't even bother posting bullshit comments following this article. Despite electing an affirmed national socialist from Harrogate, we can rest assured that most Yorkshire voters do not support the BNP despite the Westminster expenses scandal.

It would be better still

if all the pubs the BNP are known to meet at were all listed together rather than one at a time. Could someone collate all this information and post it so that it can be picked up easily by all regions. Then people in those regions can pass it it accordingly for local boycotts.

For example the Collingwood in Bolton-Upon-Dearne in Barnsley has a landlady, a woman called Peel, who has stood as a council candidate for the BNP. Also another pub in Barnsley called the Spencers Arms in Barugh Green was used by the BNP in 2008 as an election campaign headquarters. Griffin even visited it. Barnsley BNP were stupid enough to put this information on its own website. (But don't confuse it with the Spencer Arms a couple of miles away in Cawthorne). This is separate to Griffin's well-advertised meeting in Barnsley in May this year at the Fleets in Shafton.

Why just a "peaceful, lawful boycott of the premises"?

I realise you can't endorse anything other than a "peaceful, lawful boycott of the premises" for legal reasons, but I'm sure most of us agree that other tactics could be very effective.

Pubs are there to make money, so if one part of their customers are causing them grief and losing them large amounts of cash, they will boot them out pretty soon.

If that fails (as it did with me) type Barnsley Chronicle Peel Bolton into google and click on the result that matches the above address (the first when I did it) to meet the landlady of the year.

If pubs are failing, it might be due to the far-right company people have to keep there. At the Spencers Arms in Barugh Green in Barnsley local BNP members have been seen sitting outside the back. Look out for bald heads and dyed hair. So much for genetic perfection. They sit by the main road so anyone wishing to discuss their manifesto can do so quite easily.

Another pub in Barnsley worth keeping an eye on is the Cherry Tree at High Hoyland. A BNP leaflet was seen behind the bar during the recent Euro elections. It may have been an oversight by the staff but they'll need to be more discreet in future.

The other BNP pub in Barnsley, the Fleets, has lost two close rivals down on nearby Wakefield Road in recent years. If it doesn't want to follow them it may wish to rethink its policy of hosting Barnsley BNP.

Is Eliots Bistro in Nuneaton - owned by Alwyn Deacon, the BNP's main Gruppenfhurer in Nuneaton it has also played host to the British Freedom Fighters despite Deacons insistence that he is one of the BNP's new "family friendly" fascists.

I Hate the Fash

Listen to the rubbish