After being nicked in Blackpool recently for waving his arm at the UAF, who were demonstrating outside a BNP event at The New Kimberley Hotel in Blackpool, 'Penis88' has found himself back in court. 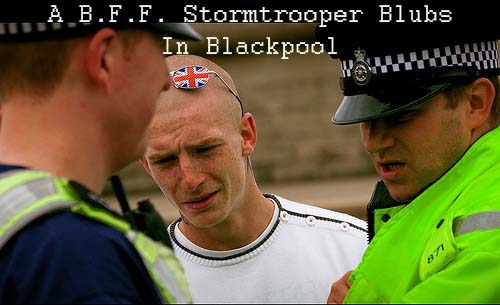 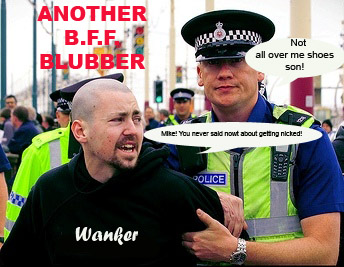 Only weeks after being nicked for straight-arming it at the UAF in Blackpool, Liam Pinkham, one of the stupid twerps in the so-called “British Freedom Fighters”, a tiny neo-Nazi group who specialise in trying to frighten soft targets, has been in court in relation to a previous incident. Pinkham, who goes by the moniker Pino88 to his fellow fascists, and by Penis88 to others, was charged with threatening two female members of staff at Liverpool’s ‘News From Nowhere’ bookshop during a BNP march through the city. According to the two women, Pinkham had threatened to burn down the shop, something Pinkham has boasted about in his own stupid posts on fascist internet forums. In court however, his barrister Philip Astbury insisted he had only threatened to “shut down the shop”, (though Pinkham repeated his earlier claim within hours of his court appearance.) Pinkham, of Leeswood Road, Woodchurch, Wirral, had originally been charged with criminal damage and racially aggravated intentional harassment, but he pleaded to the lesser charge on the day his trial was due to start. According to his internet posts, Pinkham now expects Community Service, something which he reckons will allow him to carry out more “Ops” (This is how the ‘BFF’ term their previous outings, which include being photographed standing on some steps in Scotland, being photographed outside a social club in Brighton, being videoed near some UAF demonstrators in Manchester, and being photographed outside a closed social centre in Leeds – Terrifying stuff!) We doubt it’ll be long before justice catches up with this fascist scumbag though, and that once again he’s crying like he was after being nicked in Blackpool.

Which one is penis88?

The weedy-looking one with the goatee? And have you got a name for the bell-end in the England glasses. Will be keeping an eye out for these mugs at the next EDL 'protest' in Brum.

penis88 with the goatee

Penis 88 is the one with the goatee.I`ll also be on the look out in brum.Can someone put up some pics of the main scum we should be watching out for.not the twat in the vest we all know his boat.


brum stand up and say no in august. 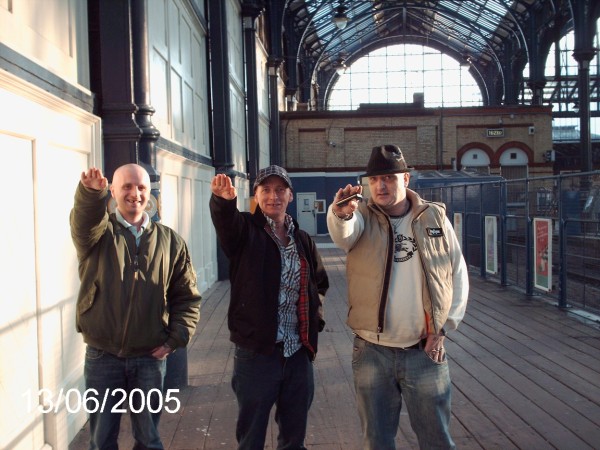 The weedy-looking one with the goatee? And have you got a name for the bell-end in the England glasses. Will be keeping an eye out for these mugs at the next EDL 'protest' in Brum.

Since when is the Union flag an England flag or English?

I suggest you try an educate yourself before posting!