The Case of the Internet Neo-Nazis Turned Failed Asylum-Seekers 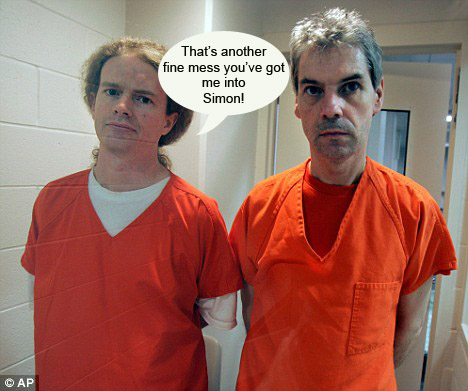 Almost a year to the day since they skipped bail and flew to the United States, convicted racists and anti-Semites Simon Sheppard (previously of 98 Brook Street, Selby) and Stephen Whittle (previously of Avenham Lane, Preston) were back before Leeds Crown Court for sentencing. Only a deranged idiot would have ever thought that their plan to claim political asylum in America would have any chance of success, but then Sheppard and Whittle are two of the biggest oddballs even on the lunatic fringe of British fascism. The reality was that they spent a year locked up in a Californian immigration detention facility, with little support from their neo-Nazi chums, before being dragged back to Armley jail in chains. The only happier ending, for antifascists, would have been at the end of a knotted prison bed-sheet. We can only live in hope.

The convictions of Sheppard and Whittle for inciting racial hatred via the internet appear to have brought to an end the period when British neo-Nazis hid behind the threadbare legal excuse that if their internet servers were not located in the UK, they were not subject to the British race laws. The fact that the police are now openly inviting complaints against websites which incite racial hatred is of considerable concern to British fascists, not least Kevin Watmough, supposed leader of the neo-Nazi ‘British People’s Party’ and the architect of the fascist hate site ‘Redwatch’. Watmough has followed the case very closely, even storing Sheppard’s personal possessions for him. ‘Little Kev’ burst into tears when the so-called ‘Heretical Two’ were originally convicted, and their incarceration has already caused him considerable problems since it was Sheppard who owned the domain names for the ‘Redwatch’, ‘Blood & Honour/Combat 18’ and ‘Aryan Unity’ sites which Watmough ran. Watmough is a shambling figure, with no charisma and little respect among his neo-Nazi comrades, his dwindling internet presence is all he has left. It was not long before the Aryan Unity site disappeared, and a considerable blow to Watmough was the loss of the ‘Blood & Honour/Combat 18’ site, with the forum and chatroom, he controlled. ‘Redwatch’, which has previously used multiple servers, is currently down to only one.

Sheppard’s unsavoury personality and self-important ramblings have left him with few friends or supporters left on the British Right, while Whittle is a textbook ‘loner’, who like Sheppard has a history of mental ill-health. When the pair appeared before Leeds Crown Court for sentencing, Kevin Watmough was their solitary supporter. As already explained he has good reason to be interested in the case, and was mentioned in the trial and also at last week’s hearing. As an alleged rapist himself though, Watmough is a natural ally to Sheppard, a self-confessed paedophile. The ‘British People’s Party’ now have a considerable track-record in terms of supporting paedophiles, not least their former Goole organiser Martyn Gilleard, who was convicted of possessing thousands of images of child abuse.

Bearing in mind the depravity of the material published by Sheppard and Whittle, it was hardly surprising that they were selected as test-cases for prosecution (though we have seen material just as disgusting on the sites controlled by ‘Teflon Kev’ Watmough.) It included images of murdered Jews and Black people, with invitations to fellow fascists to post up similar material. Other articles claimed that The Holocaust was a lie invented by Jews to slur the German people, and in one article highlighted in the case Auschwitz was presented as a Nazi-funded “holiday camp”. The material was not confined solely to the internet, with some of the texts being pushed through people’s letterboxes, and with one Sheppard tract, ‘Tales From The Holohoax’, being delivered to a Blackpool synagogue. The judge, who was visibly shocked by some of the material, said that he had “rarely seen, or had to read or consider, material which is so abusive and insulting.”

Typically, both Sheppard and Whittle were cowards to the end. Whittle snivelled and blubbed in the dock, claiming that he now found some of the material he had previously written “shocking and unacceptable” and stressing that he had never been a formal member of any British fascist group. Much was made of the fact that both were social misfits, with tales of heroin abuse and child abandonment thrown in. In his mitigation statement to his barrister Sheppard had also boastfully claimed that he had had relationships with women of all racial backgrounds, including an Israeli Jew who had grown up in a kibbutz, and supposedly told him some of his most offensive Holocaust ‘jokes’. It was said of Whittle, that he had “co-operated fully with the police, answering every question in detail.” The clear inference was that he was a grass. Sheppard too was said to have “co-operated”, though he had apparently refused to speak to a WPC as she “was taking a man’s job.” Sheppard’s misogyny is legendary.

Despite pleas from the two neo-Nazis to have their year on the run taken into account in terms of sentencing, this was unsurprisingly dismissed by the judge, and Sheppard received a sentence of 4 years and 10 months, while Whittle received 2 years and 4 months. Sheppard, who has previous convictions for inciting racial hatred, will have to serve the full term, and he may then be gate-arrested and be taken to Scotland to face similar charges there. We imagine that if he is not already among them, Sheppard will soon be living ‘on protection’ with the other imprisoned paedophiles, rapists, police informers, and any other fascists who get sent down in the months to come. Whittle, who throughout the pair’s original trial, behaved like Sheppard’s lap-dog, is sure to remain by his master’s side as long as possible. As for ‘Teflon Kev’ Watmough, even his fellow fascists are now openly wondering why he has not had his collar felt himself, while yet again two of his associates get sent down.

Contact details for the two neo-Nazi bigots and failed asylum-seekers are currently: