Howard Zinn’s play, “Marx in Soho” portrays the return of Marx. Embedded in some secular afterlife where intellectuals, artists, and radicals are sent, Marx (played by Jerry Levy) is given permission by the administrative committee to return to Soho London to have his say. But through a bureaucratic mix–up, he winds up in SOHO in New York. 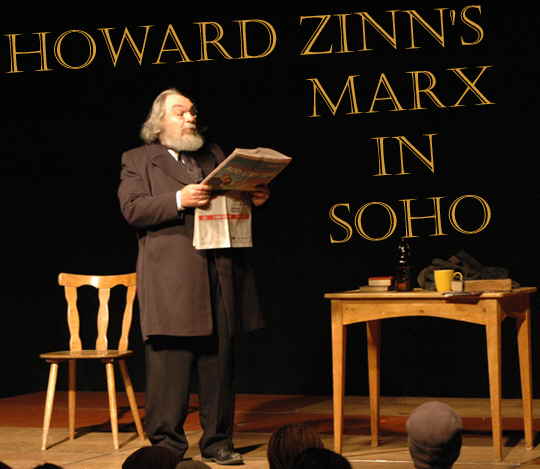 Appearing at Bradford Playhouse (7.30 pm Saturday 25th July) actor Jerry Levy will also be giving a talk on the subject material of the play and inviting questions in the 1in12 Club Library on Sunday 26th from 7.30.

Author of “ A People’s History of the United States,” Howard Zinn humanizes the man behind the ideas in “Marx In Soho;” casting a divergent light from the totalitarian movements his theories have often been associated with. Responding to the fall of the Soviet Union and the conventional perception that Marx’s ideas are dead, Zinn resurrects this controversial historical figure, embraces democracy and passionately rejects the ideological rigidity of many of his followers with the phrase “I am not a Marxist.” Instead we come to know Marx as a complex character struggling to survive with his family as an impoverished immigrant in London. Marx returns to clear his name and tell us about his life with his wife, daughters, friends and enemies. In poignant , funny, and intimate narrative, Zinn convinces us not only that Marx is not dead but rather his critique of capitalism is more than relevant today.

Howard Zinn’s Marx alone occupies the stage. “Marx has different voices. The actor has to show Marx’s outrage at social injustice, express the pedantic Marx, the vindictive Marx, Marx, the loving family man, Marx as Humorists, and a Marx that can laugh at his enemies”