Speak Out Against Racism in Sunderland 8th August

On Saturday 8th August FRFI is organising a SPEAK OUT AGAINST RACISM in Sunderland, with an open megaphone for all anti-racist groups and individuals, uniting to take a common stand in defence of migrant workers, asylum seekers, and all others on the receiving end of racist oppression. 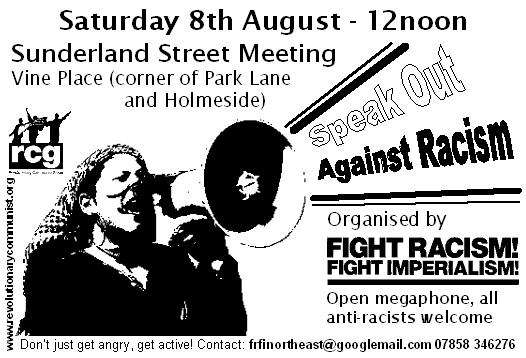 Flier/poster, feel free to print out and distribute

The event will take place at Vine Place (corner of Park Lane and Holmeside) in Sunderland city centre, starting at 12noon.

‘The message is clear - whether you're a visa overstayer, a foreign criminal or a failed asylum seeker, the UK Border Agency is determined to track you down and remove you from Britain.' Home Secretary Jacqui Smith, 18 March 2009

Racism is the form which national oppression takes within an imperialist country like Britain. Imperialist nations brutally exploit and impoverish oppressed nations, justifying their plunder and wars on the basis that people in these countries are inferior or have brought their oppression on themselves. They then use immigration laws to keep out people fleeing from the resulting war and poverty. The British working class is encouraged to see immigrants as the cause of its problems rather than capitalism. State racism and divide-and-rule government tactics are creating a fertile recruiting ground for overtly racist parties like the British National Party.

As Britain's capitalist crisis increases its hold, the Labour government is stepping up its offensive against migrants and state racism is on the rise.

• Immigration detention capacity has increased from just 250 spaces in 1993 to 3,038 spaces with plans in the pipeline to increase the detention estate by 60% by 2012. Foreign nationals in criminal prisons are currently being moved into designated ‘ghetto' prisons.
• In November 2008, Immigration Minister Phil Woolas boasted that the government is deporting immigrants at a rate of one every eight minutes. It is making increasing use of charter flight mass deportations.
• Ten years after the McPherson Inquiry into the death of Stephen Lawrence branded the Metropolitan Police ‘institutionally racist', black people are still seven times more likely to be stopped and searched than white people are.
• Anti-terrorism laws are being indiscriminately used to round up Muslim and Asian people and criminalise their communities. On 8 April 12 innocent Pakistani students were arrested on the pretext they were planning a bombing campaign. When it became apparent they were innocent they were handed over to the Borders Agency to be detained pending deportation.

So just as the Home Secretary's message is clear, ours must be too.

NO DETENTION! NO DEPORTATIONS! NO TO STATE RACISM!

Please come along and bring speeches, music, chants, literature. Add your voice and help us speak out againt racism.