The Oxton Festival, a free event scheduled for 6th and 7th September, has been banned by Wirral Borough Council. 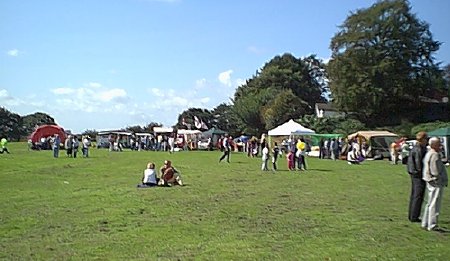 If you haven't already heard by now, the Oxton Festival has been cancelled by Wirral Council's Cabinet Committee on Thursday 24 July 2003. I gave representation to the Committee, however, was unable to gain the support of the Tories and Liberal Democrats, who both voted against having the Festival. Because the Tories held the Cabinet position for Culture, they had the casting vote and obviously used this to vote Against - even though the Labour Party's Motion was to allow the Festival to go ahead as long as we had the full support of the Police and all the Conditions were met.

I would like to thank all of you who have been helping out with the organisation of the Festival and those who promised to perform for free. I can only apologise for underestimating the lengths that some people will go to, to destroy a creative, imaginative project such as ours.

Throughout the whole organisation of last year's and this year's Festival, I have found the organisational processes and those involved in them, to be obstructive, discriminatory, patronising, suspicious indecisive and vindictive. This may go some way to explain why the Wirral is the cultural desert that it is.

If people would like to dance around secret gardens with scarecrows that is fine, however, there are those of us on the Wirral that are part of the community and pay our Council Tax, who deserve to be represented and included. Therefore, you need to take a serious look, not at the policies, which seem to be in support of culture, but at the enactment of those policies and produce organisational processes that facilitate resources that you have in people like ourselves.

It would appear that Oxton is too 'posh' to have a community arts festival and it has been mooted that we should move the Festival to Birkenhead Park. This is not possible given the timescale but also - if it is possible for us to organise a safe event in Birkenhead Park why then is it not possible for us to organise a safe event on Storeton Road Playing Fields. Is it O.K for ordinary people to be subjected to noise pollution around Birkenhead Park whilst posh people who live around our playing fields and around the Arno have ears that are too sensitive to noise.

I would like to remind all those involved in the Local Authority that it was they who suggested Storeton Road Playing Fields for the event.

Storeton Road Playing Fields was and is, an ideal site for the Oxton Festival and is public property and a public space to be utilised - not an extension of some peoples back gardens.

I do hope that the large number of small events taking place on the Wirral like ours, are going to be subjected to the same rigorous scrutiny that we have been subjected to - cloaked in the guise of health & safety. But of course, if this were the case, nothing at all would happen on the Wirral.

Last year's Festival was a great success and those that took part in the organisation and attended the event, represented a large cross-section of the community. We are all proud to have been associated with it. Our objectives and motives were both honourable and worthwhile, unlike the motives of those who sought to destroy our event.

I feel that the only positive thing that may come out of this process could be that the Local Authority and Police take a serious look at themselves so that other creative people in the future, will not be burnt out and demoralised by trying to give their time and effort for free so that Wirral can be given a chance to fulfil its cultural potential.