Post card from Liverpool - What the tourist board wouldn't want tourists to see!

Granby Street in 2004, it's over twenty years now since the well known Toxteth riots. While many saw the riots as a social uprising against repressive and racist policing, the accompanying photo-montage shows that the community around Granby Street in Liverpool 8 is looking more run down in many ways than it did after the 1981 riots. Granby Street is just one example of the insidious gentrification of Liverpool city centre which is clearing out working class people, a process which is now spiraling outwards at break neck speed. 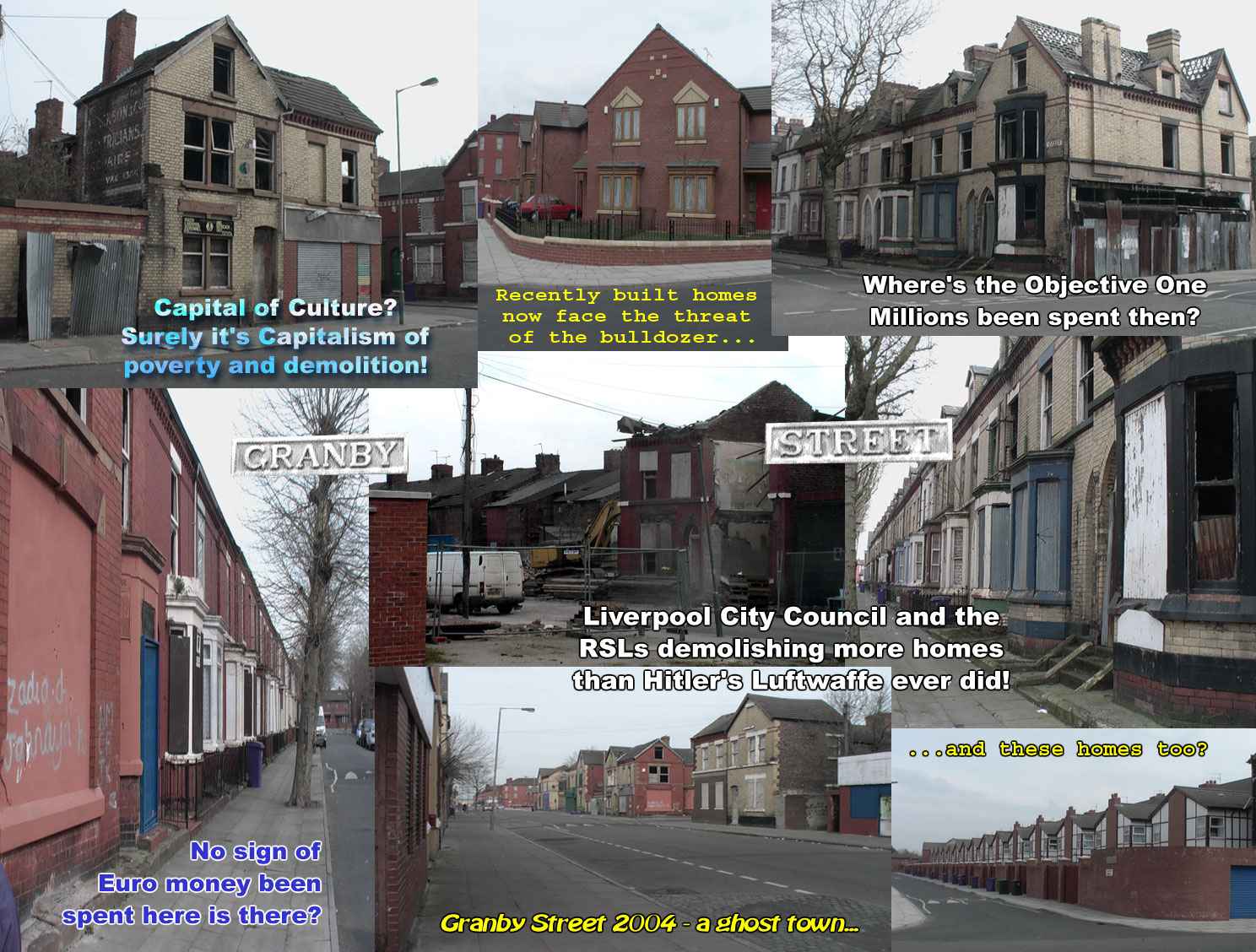 Picture post card from Liverpool to tourists of the world - This is the reality!

Close to Liverpool city centre the Granby Street community was one of Liverpool's oldest communities, the centre of a thriving multi-cultural, multi-racial and multi-faith community in many ways a refuge from the racist establishment that still controls Liverpool. On Thursday 11th of March I spent over an hour walking down this street taking over 60 digital photographs. I was accompanied by an engineering student, Rhona from Manchester, who made contact via Indymedia, this was the first stop on the way up to visit the Norris Green estate to show the desolation and destruction of the neighbourhood now known as the 'Boot' estate. The name given to it due to the constructors of the 1930's housing, Henry Boot Ltd which still exists.

While walking down Granby Street we met one young woman, I assume to be from an afro-carribean background, who shared her thoughts on the community and informed us that their recently built homes which are shown top-middle and bottom right in the photo-montage are threatened with future demolition. She told us the council officer who leaked this information to the community was sacked as a result, this is the first I'd heard about it and thus can't corroborate it from other sources. As a former resident of Norris Green and the 'Boot' neighbourhood it was plain that we shared similar concerns.

It takes more than one afternoon to drive around all the threatened working class communities in Liverpool and Merseyside. The beginning of this massive demolition programme noticeably began around 1995 in the city centre, the rate has increased and is now spreading like wild fire to the outer working class communities of Liverpool and Merseyside.

To put this article in the wider context then read the following articles.

Feel free to pass on, email, print or otherwise distribute the attached photograph if you want to.