The G8 (Group of eight most industrialised nations) Summit will be held at Gleneagles Hotel in Perthshire, about 40 miles/70 kilometres away from Edinburgh, in Scotland from 6-8th of July 2005. In past years, everywhere they have tried to meet they have been met with a massive response from the world's social movements. Now, in Britain, a network of groups and individuals is emerging that resists the Summit, and forms a lasting movement against capitalism.

The next Dissent! Gathering will take place in Edinburgh on 17th-19th September 2004.

Come along and get involved! 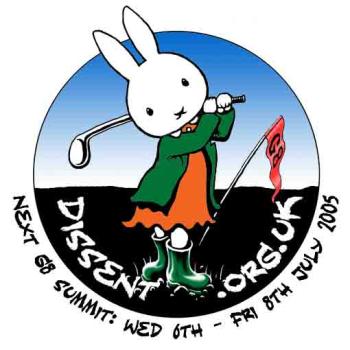 'Dissent! A Network of Resistance Against the G8' was formed at the end of November 2003. So far, those involved within the Network have produced publicity and information materials and put together road shows to mobilise people for action. Actions have been taken in solidarity with the resistance to the 2004 G8 Summit in the US, and networking with European social movements has begun. In addition, around fifteen Dissent! Network affiliated local groups and Info-points have been established across the UK.

A confrontational stance, calling for direct action, is expressed through the The Dissent! Network. The Network has no leaders or official membership list, it is open to anybody who agrees with our aims with hallmarks of the Peoples Global Action as a starting point.

The Gathering is taking place over a weekend, people are encouraged to arrive on Thursday evening, as we would like to have a day trip out on Friday, the meeting is likely to begin on Saturday morning (the exact timetable is to be worked out later).


If you would like to make a suggestion for the agenda for the weekend, or would like to get involved with the Process Group (this is the working group responsible for organising the agenda and facilitation for this Gathering)
email: dissentprocess@yahoo.co.uk

We will try to keep costs to a minimum, but there are costs for renting spaces for the weekend and for food. However, no one will be turned away or left to go hungry due to lack of money. Please bring sleeping bag etc. and tent if camping, also torches, boots, waterproofs and other camping gear will be helpfull.

See you in Edinburgh!

For more information about the Dissent! Network and the 2005 G8 Summit, visit: http://www.dissent.org.uk

More detailed information about where the Gathering will be held will be posted on the Dissent! website closer to the date.