Open Letter to Kelda Group and the Aquarion Company 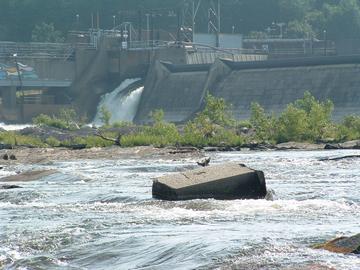 Holyoke dam on the Connecticut River

I'm posting this letter to Liverpool and Manchester IMC's since you are closest to Yorkshire Water's domain: we are trying to stop the US branch of Kelda from privatizing our wastewater treatment plant, and wondered if anyone had stories of privatization with the Kelda Group and Yorkshire Water: how is privatization treating you all? We are being promised lower rates, better service, and pie in the sky.

Your subsidiary, the Aquarion Water Company of
Massachusetts is the only bidder on a contract
to design/build/operate the wastewater
treatment facility and CSO abatement project in
Holyoke, Massachusetts, where I would be one of
your future ratepayers.
Mr. Firlotte, your company appears to be an
honorable institution, and I mean no disrespect
when I say that many of us in Holyoke don’t
want the company to come here. We’ve formed a
group called the Holyoke Citizens for Open
Government, and although the contract is
nearing final approval, we are doing what we
can to halt the process. You probably know
this already, you may have read about us in the
Valley Advocate or Springfield Republican, or
on WAMC, Channel 22, and Channel 40 news. If not,
you can catch up on the latest news and listen to our
press conference on our website:

You’ve said that one of the hardest parts of
your job is dealing with citizen groups who
don’t want you. Why do these pesky groups keep
springing up? Here are some of the reasons we
formed:

· Public water and wastewater treatment systems
have a long history of being a public trust in
the United States, and in Holyoke since 1871.
It is important that it remain so for future
generations. When the city government decided
to make it a public trust in 1871, women
couldn’t vote and children worked fourteen hour
days in the mills. But they were progressive
enough to conclude that the residents of
Holyoke would benefit by taking profit out of
the economic equation of water and wastewater
services. It was a good idea then, and still
is.

· City jobs should stay city jobs. The 26
positions at the Wastewater Treatment Plant
have been livable-wage, union, civil service
jobs that help anchor the community of Holyoke
to a decent standard of living. It’s a
struggle for people here sometimes, and good
local union jobs help. You can’t put a price
on the value of employment in the public
service, because both workers and community
benefit from the relationship. Negotiating
future contracts with a CEO who has a
background in labor relations and pushed
Bridgeport workers to a strike vote last
November doesn’t hold a lot of promise, either.

· No offense, but you folks are coming here to
make money. This is one of the poorest
communities in the state by any measure, and
your profit is our loss, and these are the same
people whose finances will be most affected by
every dollar of profit that leaves the
community with Aquarion and Kelda.

· The incentive to clean up the river isn’t the
same for a private company interested in the
bottom line. Under the current public DPW, we
have a system that is locally governed,
accountable to residents, and all the people
involved are from local communities, and these
same people have kids that play in the river,
or would if it was cleaned up. I can’t imagine
that Kelda’s stockholders and board of
directors care as much about these kids, at
least not in the same way, or about the river,
compared to the residents here who use it for
all kinds of recreation and as a thing of
beauty.

It’s a beautiful, wild stretch of the
Connecticut River below the dam, with few
houses along the banks and lots of fish,
herons, beaver, and even a few bald eagles. It
deserves to be cleaned up and preserved as a
recreational resource for future generations
and for the inherent value of wild space, and
it is not clear if that fits into Aquarion’s
plans for financial gain. I feel that the
local community and the DPW are in a better
position, and have a greater political will, to
effect the changes needed to clean up the
river, to upgrade and run the plant in the
cleanest and most efficient manner, and to
preserve the good, livable wage jobs with the
city for generations to come. Thanks for
reading, and I for one hope that you will
reconsider your bid to privatize the wastewater
treatment facility in Holyoke.