The Governments proposed Identity Card Bill has now entered the comittee stage where a comittee will spend just two and half weeks examining it before it goes on to the third reading. Despite having major implications for every person in the UK, this bill is being rushed through parliament. Liverpool Defy-ID has been formed to organise local resistance and action to stop the proposed bill becoming law. This is part of a growing nationwide network of resistance to a bill which would give the state unprecedented surveillance powers over all of us. In the current climate of eroding civil liberties and lack of democratic accountability, it seems obvious that these powers will be used to extend government invasion into our daily lives, re-inforce social inequalities and stifle political dissent. 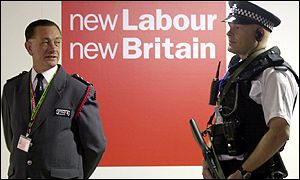 The card will carry all your names, fingerprints, iris scan, photo, NI number and resident status. The government says it won’t be compulsory to carry the ID Card, but if the police stop you without it they will be able to take your fingerprints and iris scan and compare them to a national database where your details are stored. They don’t need an ID Card to know who you are. Besides, the it is clearly stated in the bill that it is intended to become compulsory in the future.

Other public institutions and private companies (banks, utility companies, credit agencies, employers!) will have the right to consult this database, the National Identity Register. And anyone who’s asked (your employer, doctor, inland revenue etc) must pass on all the information they hold on you to the NIR who can pass it on to who they like. So, for example, if you’re running away from debts and go to your doctor for a prescription, your location will be passed to the credit company who will send in the bailiffs. The government will be doing the bosses’ dirty work.

Everyone will be required to have their fingerprints taken and stored nationally. The police will have the power to check them against those found at crime scenes, even years old. So, if you stayed in a hotel room and left your prints and the next night there was a murder, it could be you being fitted up and facing thirty years to life in prison. Terrorists need to stay in hotels and hire cars to do their dirty work, so hundreds of thousands of businesses will be required to have identity card readers to catch them out. So every time you buy petrol or a mobile phone, stay in a hotel, rent a flat or lock-up, take a new job or just go about your daily life you will be required to produce your ID Card to prove who you are. All this is justified by “being in the public interest” or for “national security” but it gives banks, employers, doctors, hospitals, the benefits agency, shops, lawyers, travel agents, just about everyone the right to force you to prove who you are and carry out checks that what you are saying is true. Data will not be erased, meaning that database will contain a complete record of all the places you have lived, transactions you have carried out, treatment you have received etc.etc..And the government will have the power to collect, analyse, distribute and sell this information whenever it feels like it to whoever it likes.

Don’t’ Think It Won’t Affect You
The government is not going to let anyone stay free from the Card. Failure to be scanned and finger-printed will cost a £2500 fine while not reporting a defective card risks a prison sentence. You can’t refuse to register (£2500 fine) or withhold information (£2500) or give false information (2 years in prison) or just not turn up when ordered to (£2500) or ‘forget’ to renew your card (£1000) or tell the authorities you’ve moved (£1000). ID Cards are just the start. Next the state will suggest your genetic profile should be stored on the card (to help out the hospitals, sure!) and that the card should be fitted with RFID (which will allow the card to be detected and scanned at a distance by hidden sensors in public buildings or street lamps). The police, government and MI5 will be able to track us every minute of the day.

We’ll Pay To Be Spied On!
The cost of ID Cards has already risen to £5.5 billion and it’s us that will have to pay for the scheme. The new ‘enhanced’ passport, which will automatically include your appearance on the NIR will cost £85. Just the ID card alone will cost £40 and there’ll be a stiff charge for changing details, renewing or replacing your card (which you must do or be fined). It’s a tax on simply being alive they’ll go on collecting year after year. Some choice!

So What Can We Do?
At least two networks have been set up to co-ordinate resistance to the bill:

DEFY-ID is an adhoc network of groups and individuals prepared to actively resist the bill, as part of resistance to a Big Brother state. They are proposing a day of direct action on January 28th . The website features information, texts for leaflets and ideas for actions, anything from leafleting, blockades, sit-downs and street theatre. The website has loads of ideas for actions and suggestions about targets for action, companies and organisations involved with or profiting from ID card legislation, with their locations around the country. Liverpool Defy-ID have met once already and are planning actions for the 28th. They need YOUR involvement and can be contacted by e-mailing italia@gryphon33.fsnet.co.uk

NO 2 ID is a mainstream national organisation supported by a wide range of organisations and individuals including NGO's political parties and members of parliament. Their website includes up to date info on latest developments concerning the bill.

People and communities who just want to live ordinary lives in relative freedom need to start organising, now! WE BEAT THE POLL TAX, WE CAN BEAT THIS TOO. LET’S DO IT!

Other links:
Liberty
News From Nowhere
Trevor Mendham: The case against ID cards