Today, Friday 28th of February was the National Day of Action against government plans for a compulsory ID card and ID database. Our group was only set up in early January and quickly and successfully organised a worthwhile protest here in Liverpool. 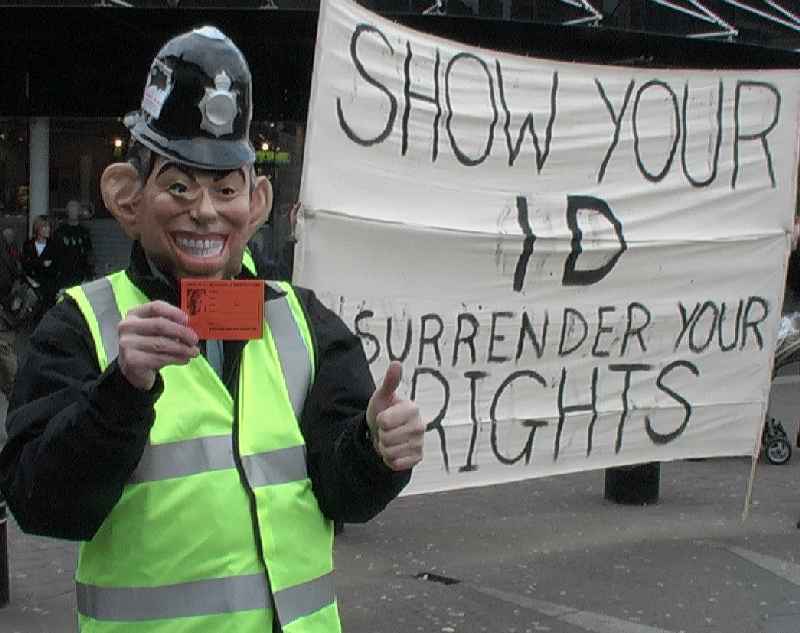 This is a brief report with one photograph posted here and within the following link, a more fuller report with extra photographs will be posted tomorrow (Saturday 29th January)if not before, ie as fast as I can write it and post it up.

Suggestion: It would be very useful/helpful if your comments, messages of support, points of concern, information, questions, rants and further debate etc were posted within the main article link above to keep it all together and for future reference and information.

Also just saw Newsnight while writing this on Radio Frequency Indentity (RFID) more on this later too...

The Liberal party passed out 2000 No2ID flyers at the John Moores Freshers Fair and 1,500 at the Liverpool university fair

We are asking for support to post flyers from 12.30 to 14.oo on Thursday 5th October to mark day the first of many hikes in the price of passports will be made to mett cost of ID card Scheme. 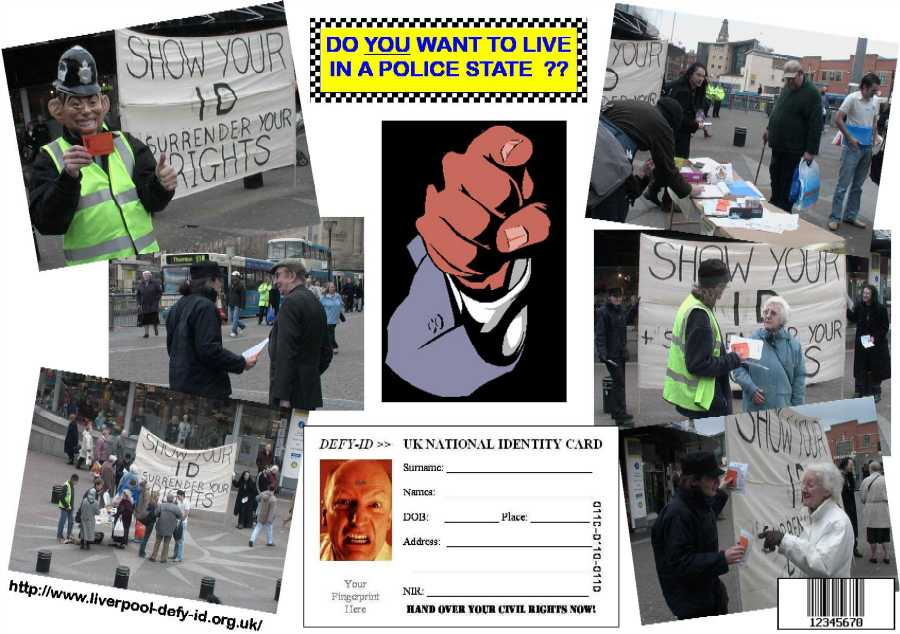 Here’s a composite of the photographs taken and the additional report (updated):

We were out between 11am and 1.15pm on Friday 28th January and it was bitterly cold. You can see from this composite digital photograph exactly where we decided to put up our stall, banner, give out leaflets and issue mock ID cards. We were opposite the Gyratory bus lane, this is very significant in itself as it’s not a location where campaign stalls, banners and leaflets have been seen before. We were given a fair looking over by the CCTV camera which pointed down to have a closer look at us, followed by Mersey-travel staff who were later joined by the ‘blue band capped’ community support police. There were approximately ten of us at the start of the action and at no point did any official complain or question what we were doing, in actual fact they would have been hard pushed to make up an excuse to move us on, we weren’t blocking the thoroughfare and we didn’t litter as none of our leaflets were dropped as we can quite clearly see from our own digital photographs.

I spoke to a group of five young Spanish students who opened their wallets to show me their compulsory ID cards, which they have to pay for, however it didn’t stop the terrorist bombing of the Spanish train early last year which clearly exposes one of the many fake excuses for this repressive legislation, that it will stop terrorism.

NOTHING TO HIDE? NOTHING TO FEAR?
We all have something to hide it’s why many of us have net curtains on our windows, it’s why we have frosted glass on toilet and bathroom windows. However more than that we have a fundamental right to our privacy it’s enshrined within the UN human rights convention and incidently in the UN Convention on the Rights of the Child. A few people were unshakeable in their belief that they had absolutely nothing to hide. I’m not sure whether they meant that they didn’t have anything criminal to hide as they didn’t seem to want to engage in debate they just wanted to say they agreed with ID cards and move on without engaging in balanced debate.

We had a few express racist opinions, no surprise there (with the issue of ID cards being linked with asylum seekers and refugees by the government), saying it would keep out the foreigners but they didn’t want to listen to reason, they just ranted and moved away quickly.

Quite a few people seemed to relish the opportunity to engage on various levels of political debate on issues around ID cards and police/state powers such as; what freedom have we got now? Don’t we already live in a police state? I was cornered for quite some time by a variety of people, it might suggest the public are not being engaged in political debate at the level we used to be by councillors or MPs on the street or doorstep anymore, as I said in my earlier posting we had a very broad section of the public engage with us.

I mentioned to a few parents with babies in prams that the government were also proposing to set up a national children’s database as well for all 11million of them. I used a possible example of a child labelled as disruptive at age seven, it being written on their computer file and linked with their National Identity Register number for all time and it adversely affecting their choice of schools at a later age, many small children naturally grow out of their hyperactive behaviour as they grow up or with a change of diet, however if they have undiagnosed attention-deficit hyperactivity disorder (ADHD) then it could quite easy end up with them being negatively treated by their teachers and schools. One parent commented that her toddler had just been diagnosed as having ADHD and what I suggested as a possible scenario concerned her and she then gladly took a leaflet as suddenly it brought home to her what a compulsory ID card and database could mean for her toddler.

Another example given to me was someone who said it’s only been in recent years that dyslexia has been better understood, previously you were simply labelled as being ‘thick’ left at the back of the class and ignored, however as parents will know many children with learning disabilities are not being properly assessed and when they are they're just not being given adequate support or resources.

53 YEARS SINCE ABOLITION OF COMPULSORY ID CARDS:
It’s 53 years since second world war ID cards were abolished in 1952, they were the first and only time compulsory ID cards were imposed on the British public and in actual fact they were in use for longer in peacetime than during the war years. I pointed this out to older retired members of the public and I said the reason they were dropped according to the Churchill government of the time was the breakdown of trust between the police and members of the public going about their own private business. People simply didn’t like being bossed around by people whose wages they paid.

I mentioned Radio Frequency Identity (RFID) technology it was being discussed on BBC Newsnight on the evening of our action, this is a case of “BIG BROTHER” tracking your shopping without your permission! Here are a couple of links to articles which will give you a basic introduction and the facts and figures, first a quote:

“Pressure group Consumers Against Supermarket Privacy Invasion and Numbering (Caspian) is urging people to restrict their purchases at Tesco. It claims RFID chips can be used to secretly identify you and the things you're carrying or wearing. All kinds of personal belongings, including clothes, could constantly broadcast messages about their whereabouts and their owners, it warns.”

Read the full story on this next link:

Q&A: What is the RFID-hype all about:

Already computer hackers can access and reprogram RFID chips with portable handheld computers linked to portable radio equipment, the security level is very poor. Take a read of the next link.

Liverpool DEFY-ID members have addressed the Liverpool Cuba Solidarity Campaign group, Liverpool Friends of Palestine in recent weeks giving out leaflets and mock ID/Info cards to both those groups. If your campaign group, tenants association, youth or community group, trade union etc would like a speaker from Liverpool DEFY-ID to address your meeting on the subject of ID Cards and the National Identity Register then make contact via Liverpool DEFY-ID email address:

Liverpool DEFY-ID are hoping to organise another action/protest on the 53rd anniversary of the abolition the last compulsory ID cards on Monday 21st of February:

Plenty for us to be thinking about for now.

LIVERPOOL DEFY-ID NEXT MEETING:
Next meeting is 6.15pm Thursday 10rd of February at News From Nowhere, Bold Street, Liverpool.

Perhaps you were not charged with littering or similar because the vast majority of people couldn't be bothered taking one of your leaflets?
It is strange that you use the Spanish students as an example but don't criticise the fact that they have ID cards; just that they didn't stop the attacks in Madrid.

I'm no great fan of them myself because I see little use for them but I am also not that paranoid to believe that it makes a blind bit of diference whether I have one or not. 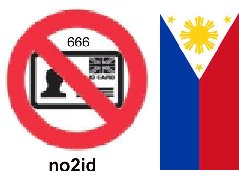 No2id campaign in the Philippines

Just to let you know that we are in solidarity with your struggles there as we are also presently experiencing same predicament here in Manila, Philippines. Perhaps the difference is there is very low awareness here of its dangers to civil liberties and mainstream media exposure of the opposition is almost zero.

Liberal Party members have so far delivered more than 70,000 flyers on a door to door system in the wards of Tuebrook, Stoneycroft, Clubmoor, Anfield and communities such as
City Road area Walton, Fairfiled, Croxteth Country Park, Sandfield Park,the Welsh Streets in Toxteth as well as parts of Norris Green ,Kensington and Knotty Ash.

We are keen to extend distribution in Kensington, Knotty Ash and Toxteth and launch into the Wavertree/Church ward area

Over the next 6 months we hope to broaden the net of coverage. If anyone would like to assist please e mail us at