Protest against the slave labour of failed asylum seekers

Merseyside Asylum Rights Campaign got together with other activists outside Millennium House, Liverpool on Tuesday 24th May, to protest about the Home Office and YMCA negotiations and plans for a forced labour scheme for failed asylum seekers.

The Home Office and YMCA are pledging that this scheme will be under section 10 of the Asylum & Immigration Act 1999.

The demonstration was small but effective. The 8 protestors stood their ground outside Millennium House (Liverpool City Council building) and were joined in solidarity by those invited to the meeting on their way in and out of the meeting and by those few who ’gate crashed’ - Councillors! 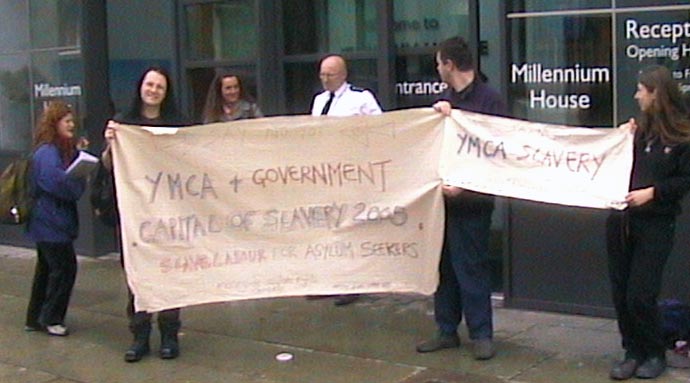 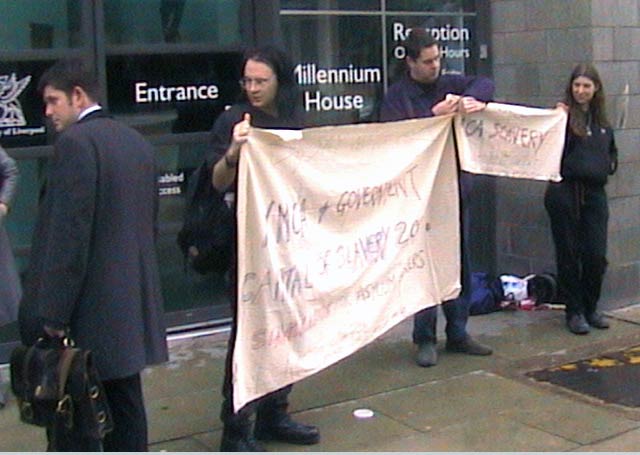 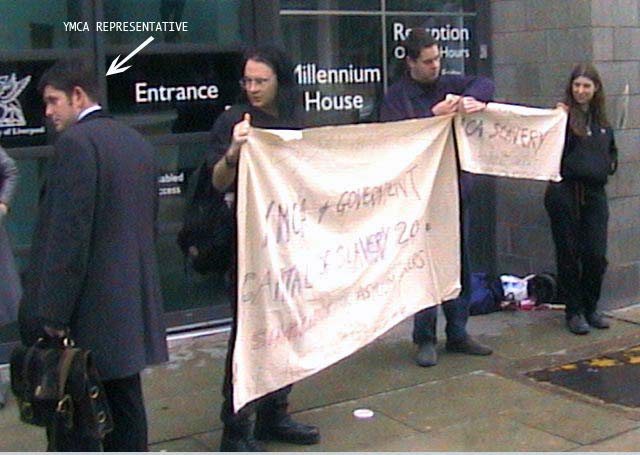 It was clear that 99% of the groups and individuals attending the meeting, which included the Transport & General Workers union representative, local Councillors, Faith group representatives, voluntary sector groups and the statutory sector, were totally opposed to the scheme.

After the meeting we were informed that people in the meeting had made their feelings clear and a united ‘protest’ to involvement in the scheme was strongly conveyed to the Home Office and YMCA.

During the demo, considering we were a small team, lots of noise was made and passers by were very interested to find out about the scheme. Most people were horrified when informed about the plans for the forced labour of asylum seekers and had serious concerns over Liverpool becoming a slave city once more.

Over 50 signatures were collected through the course of the action. This was handed to the YMCA representative, who came out to the demo after the meeting. The representative wanted to have a ‘chat’ about Merseyside Asylum Rights Campaigns feelings towards the contract. WASN’T IT CLEAR FROM OUR BANNERS AND PROTESTING PRESENCE! So, he was informed that any ‘chat’ would only happen in a public space, outside the entrance to Millennium House, and not behind closed doors and that it would be a filmed meeting.

Strangely enough when we were approached after the meeting he didn’t seem to want to have a meeting to talk about our feelings towards the scheme’. Instead he stated “I think we have got a clear message from your demonstration and through the comments from within the meeting that there are some serious concerns over this proposed work scheme for asylum seekers, and we assure you that we will take these issues and concerns back to our trustees to deliberate”.

We also made the YMCA representative aware of the Birmingham action on Tuesday morning where Birmingham & Liverpool protestors dressed as slaves visited the Arch Bishop of Birmingham’s house in Harborne, Birmingham.

He seemed to be fully aware of that aspect of this protest and unnerved by it.
These protesters took to cleaning the Arch Bishop’s house and literally acted out what asylum seekers will be doing if the contract is implemented - slave labour, skivvies for the YMCA.

An assurance was made by the Chaplaincy to the Arch Bishop during the Birmingham protest that a response to the No One Is Illegal letter will be made in the near future. This letter has been sent several times without response and asks pertinent questions about why the YMCA is involved in this contract of slave labour. We’ll see if they actually do respond this time!

So there was a three pronged approach - a protest at the Arch Bishops home in Harborne Birmingham, a demonstration outside the ‘consultation’ meeting in Liverpool, and a ‘protest’ by those inside the meeting.

We think it was very successful but we will have to wait until we hear the result. BUT that doesn’t mean that we stop now. Keep up the campaign. Write to your local MP, visit the Arch Bishop’s house yourself, write to the YMCA, demonstrate outside your local YMCA.