7 people arrested in Barcelona (Spanish state) during a manifestation

7 people arrested in Barcelona (Spanish state) during a manifestation in solidarity with the anarchists jailed in italy. 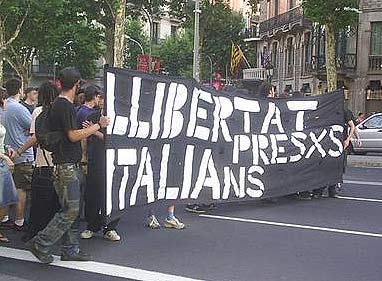 Free translation from castillian at:


The saturday 25 of June 7 people were arrested in Barcelona (Spanish state) during a manifestation in solidarity with the anarchists jailed in Italy.

All of them were brutally struck emphasizing the fractures of fingers and arm that one of them presents.

During the same nigth two spanish were liberated.

The anothers five were 2 Greeks, a Chilean, a Czech and a Italian, two of them have left today, Monday 27 of June, to 20:30 after declaring before the judge; but to the other three they have decreed preventive prison to them: two in the jail "Modelo" and another one in "Wad-Ras". The five will have to face the acusations of public disorders, damages and attack, and in addition on two to them it falls the position of injuries. All of them have confiscate the passports, they must go to sign every week to the court, and all of them are in deportation process.

50 people went to the "wad-ras" womans jail during the day 28 of june for show solidarity with the people jailed and the day 30 of june go to be another concentration in front of the "Modelo" jail.