Victory for the Irish Ferry Workers?

Liverpool has shown its support with Irish Ferry Workers in a dispute which may have been resolved this morning… (14/12)? 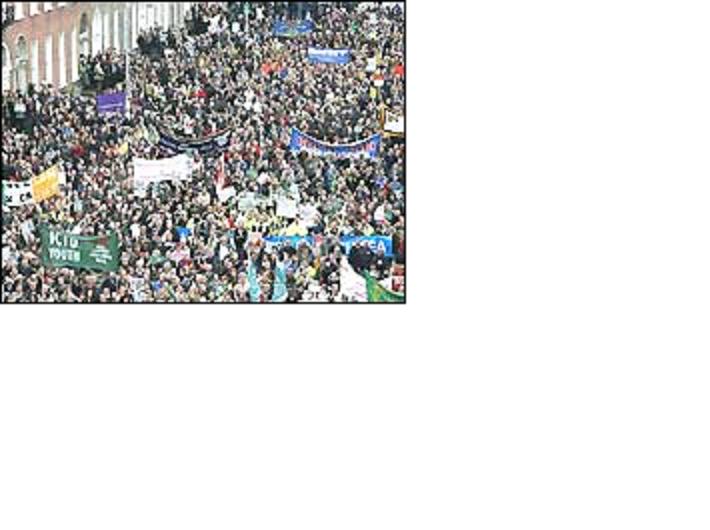 ‘The bitter dispute over Irish Ferries' controversial outsourcing plan has ended following a breakthrough in talks at the Labour Relations Commission overnight.

After a full night of negotiations, the company agreed to pay the Irish minimum wage to all workers regardless of which flag it sails under.

It has also agreed to protect the existing terms and conditions of any current workers who wish to remain with the firm rather than accepting a redundancy offer.

Irish Ferries' employees are due to begin voting on the new agreement today, with ferry services expected to resume sometime in the afternoon.’
(

The RMT and Initiative Factory sent a 40-seater coach last week (Wednesday 7th) to Holyhead to show support with the ferry workers. There were about 5 RMT and 15 dockers from Liverpool. The site of the demo was outside the docks and about 400 yards from the stern of the ferry. Eventually there were about 50-60 people there chiefly from Holyhead, RMT Wales and activists.

Dozens of workers occupied two ferries for more than three weeks in appalling conditions, locking themselves in engine and control rooms below the water line, with little food and the lights on twenty-four hours a day. The MVs Isle of Inishmore and Ulysses were occupied when they docked in Wales and it became apparent that their employer, Irish Ferries, had secretly imported replacement crews from the Baltic states to replace 540 unionised seafarers with agency workers on €3.60 (about £2.80) an hour. The crews were offered immediate dismissal, ‘voluntary’ redundancy worth half their entitlement or re-employment at €3.60 (the Irish minimum wage is €7.65). Some choice!

The scab crew came aboard incognito with security guards who then changed into uniforms and riot gear, ready to summarily sack and expel the Irish crew from the ships. The company says that the security presence was “necessary” to ensure access by safety and maintenance personnel while at the same time illegally denying the trade unions access to their members; another example of how private property allows bosses to ignore the law when it suits them. “We have a duty and responsibility to protect our assets", said a company spokesman – quite. The Irish courts ruled after the 2004 dispute that terms and conditions previously agreed should stay in place until 2007. How do you get round this inconvenient little problem? Sack the workers and replace them with new ones employed on a different basis. Some courts, some justice….. Apparently, not only did the company deny union officials to board the ships but they also refused to allow other crew members to leave the Ulysses, hoping to cause maximum pain and divide the workers one from another.

The dispute has attracted widespread support. The MV Normandy had to dock in Dublin after being ‘locked out’ by workers at Rosslare. A crew of eastern european workers, ready to be put aboard had to be driven away in taxis after SIPTU said it would not work with the company if it persisted in trying to put scab crews onto Irish ships. An unofficial lockout of Irish Ferries ships across Ireland soon developed and all sailings cancelled. As mentioned above, a call by the Welsh TUC, the RMT and the ITF for a demonstration at Holyhead on December 6th in support of the crew occupying the MV Ulysses drew 60+ demonstrators of whom 25 came from Liverpool. Not many you might think but more than made up for by 100,000 who attended ICTU-organised rallies in Dublin and other cities on December 9th to demand government action to combat exploitation of migrant workers and the displacement of jobs. The crew have been “overwhelmed” and encouraged by the support; we can make a difference.

The company has a long history of acrid labour relations and on at least one occasion previously had allegedly threatened to use tear gas on strikers. In this dispute they have – because the law allows them to – threatened to withdraw redundancy offers by going into (temporary) liquidation, no doubt emerging later under a Cypriot flag and registered office in Belize. Crew member Gary Jones on the Isle of Inishmore, said: “We've given a lot of things away to Irish Ferries over the last two years. They've made savings of £3.5m by taking away conditions from us. We've only our jobs left and that's what we're trying to secure." Although Irish Ferries says cost-cutting is necessary, its local competitor, Stena Lines, says it has no similar plans and will continue to use local crews. Easy for them to say but we know of some casualised workers in the boutique shops and hairdressers who earn as little as 74p an hour for 12 –16 hour shifts who must stay aboard ship for days on end as they shuttle back and forth across the Irish Sea or to France.

Everyone close to dispute recognizes that the replacement crews were duped by the company and are as much victim’s of Irish Ferries duplicity as anyone. People all over the world have a right – if money does – to move and find a place where they can live and earn a decent living. But anyone of them who takes a job with the company in these circumstances will be a scab and deserves to be treated as one. The SIPTU president said 'Shipping is a globalised industry where we are getting a glimpse of the future for workers, if neo-liberal politicians and the vested interests they represent have their way”. Globalization and the spread of rampant free-market capitalism is not a far-away problem of peasants driven from their land or bulldozed shantytowns but here and now, happening not 60 miles from Liverpool.

Mostly Jerry with some sinister additions...