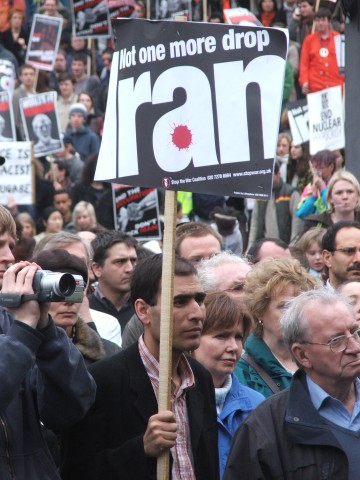 Well done on getting the pics out so soon Well done for getting the excellent pictures out so quickly. I really appreciated them as I had wanted to come down form Edinburgh but hadn’t been able to. Rice is a monster who was one of the architects of the savage and unprovoked attack on Iraq and now wants to attack Iran – possibly with nuclear weapons. Here is a statement from SACC (Scotland Against Criminalizing Communities www.sacc.org.uk) :

Here is how the BBC website reported Rice’s visit:

The BBC Radio 4 `World Tonight` reported that 2,000 people had turned out to protest - probably an underestimate but even 2,000 is a good turnout.

The racist image of Arabs as being indolent (lazy), dirty and dishonest is a racist western myth. The Iraqi people have suffered greatly due to war and sanctions and some $23 billion of funds for Iraq’s reconstruction has gone missing – stolen by the occupation forces. There was a good documentary on Channel Four television last week about it:


With regards to 9/11 the idea that 19 hijackers with bolt cutter knives somehow did it all by themselves is nonsense. I believe that September 11th was largely an inside job. This website is worth looking at:
www.nineeleven.co.uk

restores my faith in human nature. thanks so much on behalf of all of us too tied up with work or caring to be there - we're behind you all the way.