This year, Merseyside's May Day celebrations crossed the water to Liverpool. 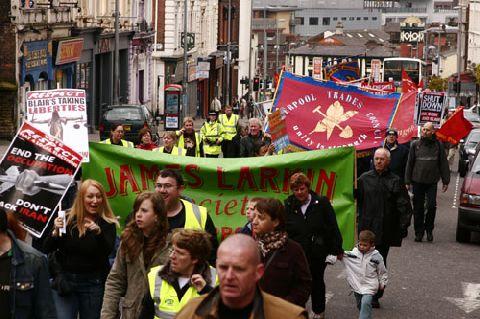 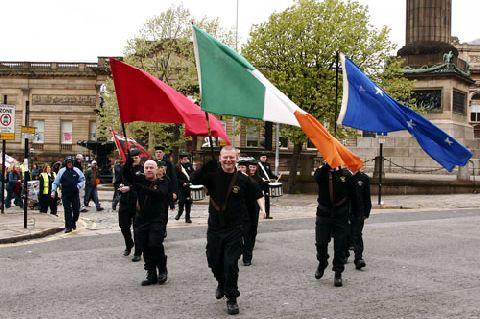 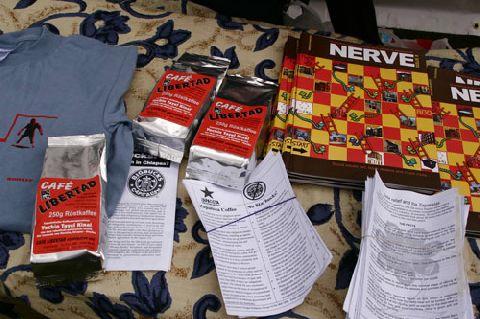 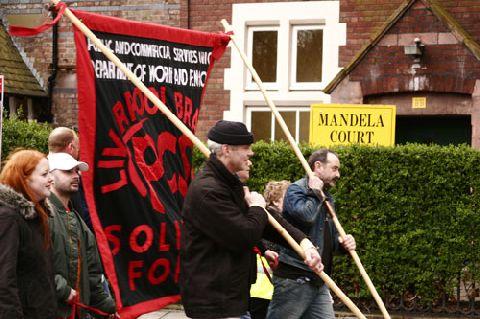 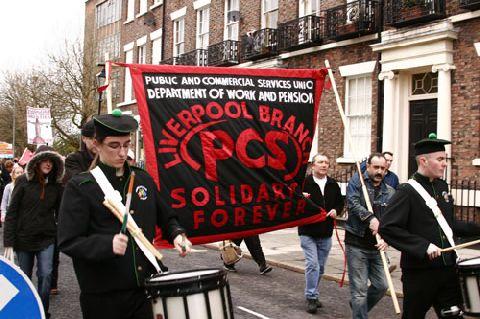 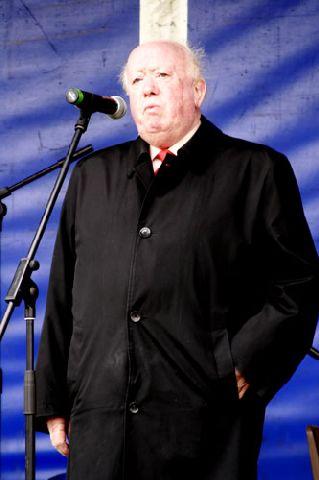 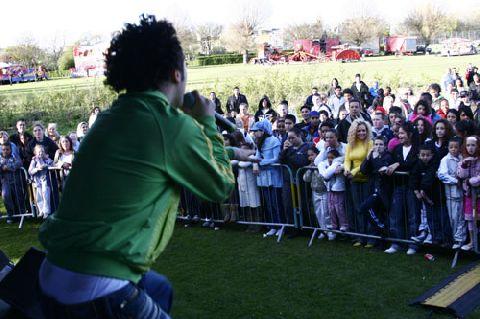 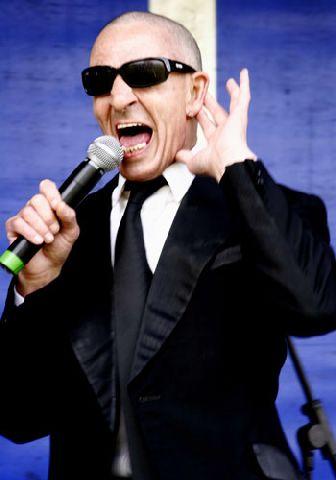 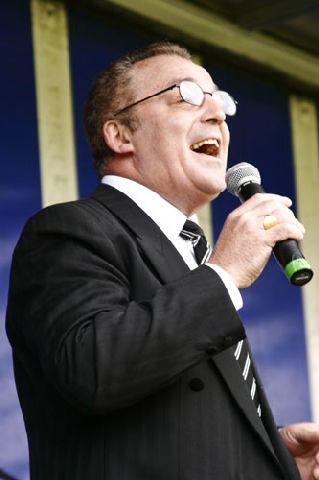 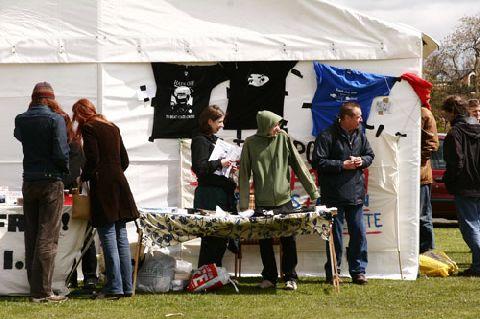 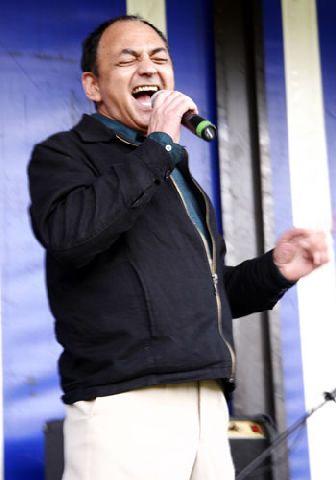 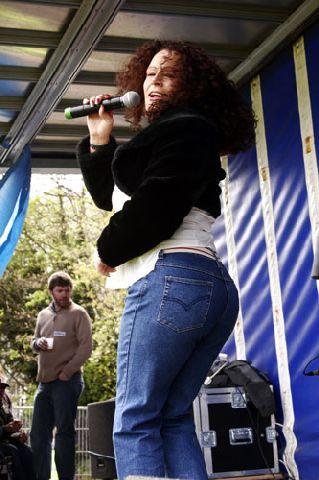 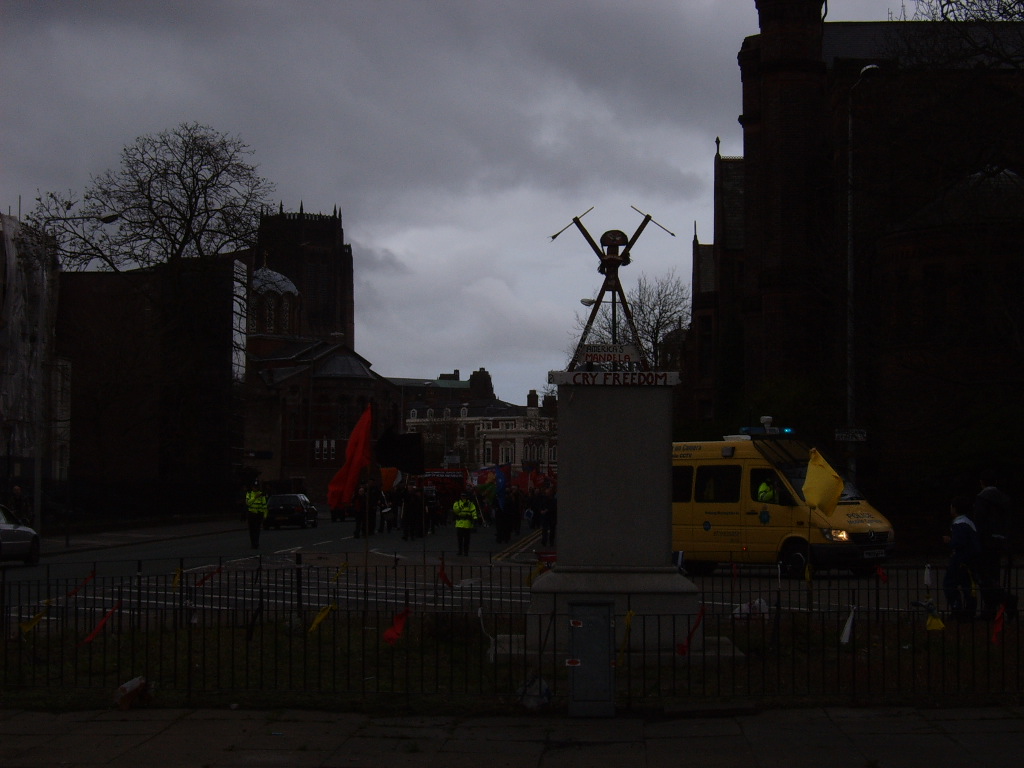 At about 11:30, the march set off from St George's Plateau, about fifty people having ignored grey skies, chilly winds and special offers on soft furnishings. We picked up a few more along the route to Princes Park in Toxteth, accompanied by the ever-rousing James Larkin Republican Flute Band (

The park looked massive at first, as the smallish number of marchers spread out across the fields. Some - including your brave reporter - stayed by the gate to listen to the speeches. George Galloway had been top of the bill, but apparently he couldn’t make it due to trouble with his plane.

The representative of the Public and Commercial Services union (

http://www.pcs.org.uk) rep asked for support in their 48 hour strike this week. He argued that the government’s proposed job cuts are part of their “privatisation agenda”. Can’t argue with that.

Carolyn Jones from the Institute of Employment Rights (

http://www.ier.org.uk) bemoaned poor pay and conditions in this country, and called for the repeal of Thatcher’s anti trade union laws. “Is that a flying pig over there?” quipped the TUC's Alec McFadden, although he was talking about beer or something.

The final speaker was Bob Wareing. The Labour MP for West Derby used words like ‘capitalism’ and ‘socialism’, whilst solemnly voicing his hope for “a real Labour government“. This went on for about half an hour. Hmm. By the end I was hoping he’d liven things up by doing a Gallowayesque cat impression, but alas there was no such luck.

Anyway, the wind dropped and the sun gradually cut its way through the grey. There were fairground rides, bands, stalls, and hundreds more people. Soon the green expanses didn’t seem so daunting.

http://www.libcom.org/hosted/lsf) had their own tent, which mixed chilled acoustic music, hilariously observant poetry and discussion on issues facing us all. The atmosphere was generally relaxed and friendly. Many people sat on the grass, and it seemed a million miles away from the other side of the field.

http://www.liverpool-defy-id.org.uk) introduced a discussion on ID cards. Over the next half an hour or so, the following points were made:
- the scheme finally received Royal Assent a few weeks ago
- people say that they have nothing to worry about since they have nothing to hide, but everyone wants privacy, and that’s ok
- you can only really be in favour of the cards if you trust the government...and all future governments
- it is important to argue on principle rather than cost, because the government may reduce the charge (provisionally at least £35 each!) or fund it out of taxation
- they are meant to exclude people from receiving certain services
- likelihood of “function creep”
- comparison with sus laws which were one factor in Toxteth riots of 1981
- similarly, they have ID cards in France, non-white and poorer people are disproportionately asked for ID, possible factor in Paris suburb riots last year
- they won’t stop terrorism as people can enter the UK without a card
- detailed records will be kept, information can be sold to private companies
- just like with the poll tax, people should fight back against the government by refusing to register
- unions can play a role in resistance by refusing to process cards
- people should renew passports as soon as they can, before ID processing begins

A climate change discussion was introduced by our second Maria of the afternoon. The debate brought up the following issues:
- too much greenhouse gas in the atmosphere is leading to increases in temperature
- deforestation means that trees cannot remove the excess gas
- some people jokingly welcome climate change, saying it will be like the “Costa Del Sol in Fazakerley“, but it’s not as simple as that, we will have “weather chaos”
- New Orleans is a taste of things to come (though there was some debate about this!)
- worst possible outcome is “business as usual” in the future - profit-hungry industry will not be able to prevent or deal with the disaster
- Kyoto Protocol of 1997 committed governments to reducing emissions by 5%, but this is nowhere near what experts think is needed, and isn’t being fully complied with anyway
- we can’t wait for governments to take action, we must act on an individual basis (in our homes) and collectively (through direct action)
- Climate Camp (

http://www.climatecamp.org.uk) in August will promote environmentally-friendly lifestyles and discuss strategies for saving the world

The discussion on regeneration proved to be by far the most controversial of the afternoon. It was introduced by Nina Edge from the Welsh Street Home Group, and Councillor Steve Radford. Both urged people to vote for the Liberal (as opposed to the ‘Lib Demolition’) Party in this week‘s council elections. However, many thought that May Day was no time for a “free party political broadcast” and that participation in elections was “a load of toss”. Anyway, nobody appeared to disagree that:
- although John Prescott has been in the news for other things recently, his ’Pathfinder’ scheme, the demolition of 20,000 Liverpool homes and the possible end of ‘social housing’ in the city is far worse than his shagging around
- Picton, Wavertree, Edge Hill, and Welsh Streets in Toxteth are being targeted
- it costs £18,000 to demolish these houses, whereas it has been shown that it costs far less to refurbish those that need it
- the scheme amounts to ‘social cleansing’; where are we all supposed to go?
- there are already 21,000 waiting for housing in Liverpool
- something had to be done apart from voting, since many people in the tent were never going to vote for any party

Nina said she would keep in touch with Liverpool Social Forum, and made an appeal for anyone with technical knowledge to help her set up a website. Email:

The music went on for a couple more hours, and folks gradually began to drift home. Capitalism lives to fight another day, but at least we were thinking about important issues, meeting people, and carrying-on the fine May Day tradition of not working.

I read you report on the Mersey May Day event and felt disappointed at the condescending attitude apparent in the first half of the report. OK so you may be disallusioned with politics, trade unions and anything "hierarchical". But being patronising to people who are actively attempting to change things and working against capitalism seems to me to be hitting the wrong targets.

I am the "woman from the Institute of Employment Rights" who "bemoaned poor pay and conditions in this country and called for the repeal of Thatcher's anti trade union laws" I hope I said more than that. Calling for a Trade Union Freedom Bill may seem like looking for flying pigs to many and I agree that the call for a Bill will fall on deaf ears in parliament. But calling for the abolition of slavery, for womens suffrage and even an end to the war - seemed pie in the sky for many in the past. Thankfully that didn't stop people pushing forward those demands and highlighting why those demands were necessary.

We don't defeat our enemies by sniping at our friends.
best wishes
carolyn

Sorry for any offence Carolyn

Carolyn, I'm sorry if my choice of words upset you. I absolutely support anyone who is genuinely trying to improve things for workers in this country. We may differ on tactics, but that doesn't mean I have anything but respect for you.

You definitely did say a lot more than I mentioned, but I summarised the other speakers in a couple of sentences too. I even linked to your site! Personally I believe that it isn't enough for a few people in an organisation like yours to demand something from a stage. I'm sure you'd agree with that. A repeal of the trade union laws would be possible if the whole working class demanded it, but I think that the best way to make the government retreat is to actually act outside the law on a mass scale. As long as people are preaching to fifty of the converted from a stage nothing worthwhile will happen.

And sorry I didn't hear your name properly, I'll edit it into the article now!

Additional photos showing groups either not mentioned, photographed or uploaded. 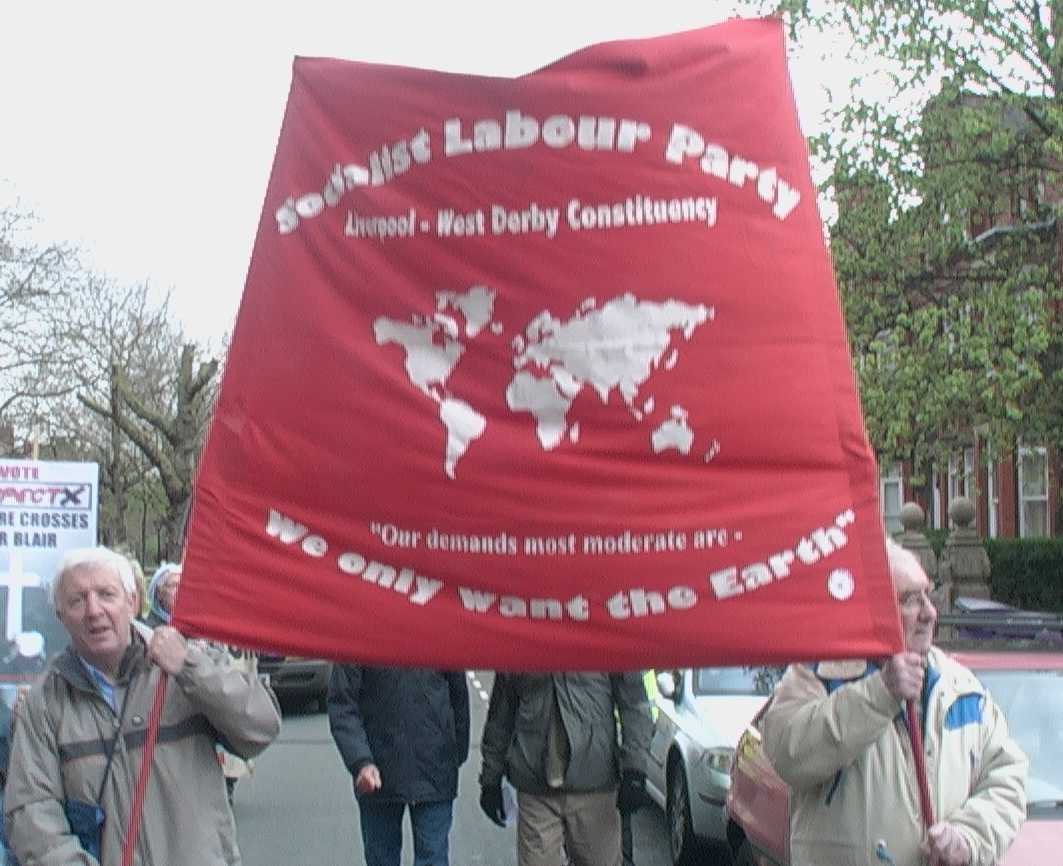 SLP - alive and marching in Liverpool 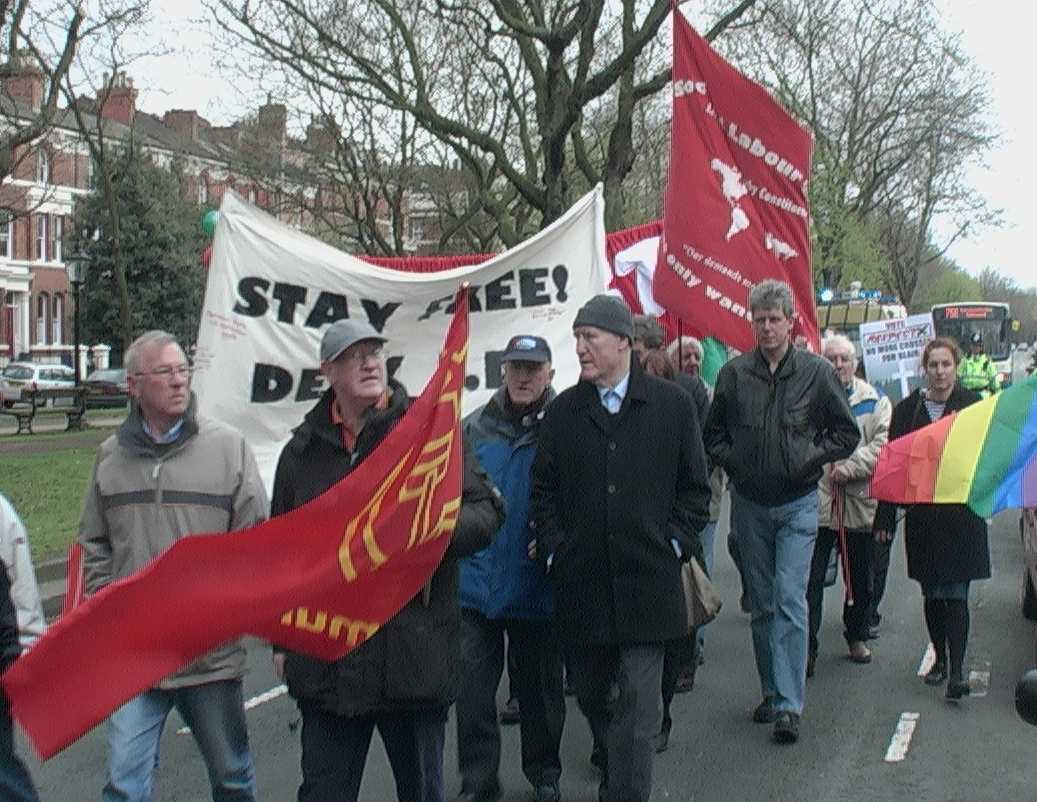 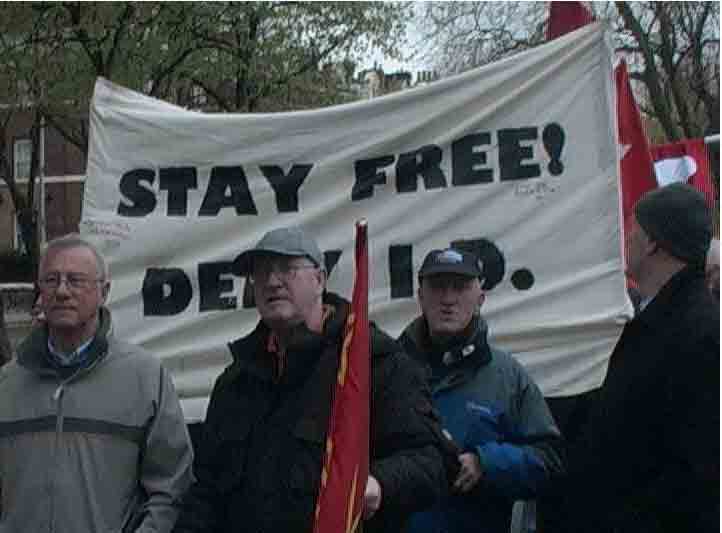 I've attached three hastily taken digital photos, one of Defy-ID campaign banner, SLP banner and another with the Communist Party flag being carried. Additionally Huyton CND banner and Respect banners were also on the march but not shown.

Having been on a fair few marches and protests in Liverpool this past year I note that not all organisations or groups are shown on marches, please note there were no Labour Party banners on the march. Whether this is due to lack of photographs or limits on uploading.